Seven months ago, I walked the plank of putting it all on the line and choosing how I thought the 2014 Major League Baseball campaign would play out in the end. Now, I am acutely aware of the pitfalls of such leaps of “faith” (if you can even call it that), but everything seemed to be pointing in two fairly safe directions for the climax of the MLB postseason between…

The St. Louis Cardinals and the Tampa Bay Rays?

I mean, what was there not to like? Two clubs that had played strong the previous year, had made some adjustments where they had been weak, and had a solid balance of proven veterans and promising youngsters ready to contribute then. Add in the seemingly irresistible October presence of the Cardinals and the savvy of Joe Maddon in Tampa, and I repeat, what’s not to like?

Fast-forward a baseball year later and only half of that equation seems reasonable. The Cardinals delivered on promise, sort of. They had a battle of a season in which, despite winning their division crown, they often left a feeling of not quite meeting the mark of how good they should be. Eventually they were eliminated in quick order in the National League Championship Series, amid a mixture of confounding decisions and finishes over five games.

The Rays, on the other hand — well, that was a complete swing and a miss. They never got out the blocks, with a mixture of chronic injuries and underperforming stars derailing their season from the jump. There were even times that they found themselves with the worst record in the American League and proved that some skies are even too rough for an ace pilot like Maddon to navigate through. In the end, they finished 19 games back in the American League East and face a massive rebuilding effort with Maddon, ace David Price and GM Andrew Friedman all having left Tampa behind already.

So what does all of that equate to? That you never know what is around the bend in any given season. Last night, the San Francisco Giants were crowned as World Series champions after a seven-game war with the upstart Kansas City Royals, in a series that nobody on Earth predicted coming. Not the players, managers, fans, pundits, nobody. But all the while it was a brilliant display of the buffet of underlying and emergent talent in today’s MLB. Stars were made of Eric Hosmer, Mike Moustakas, Alex Gordon and the fans of Kansas City, while Madison Bumgarner transcended from the ranks of the underrated to the elite, clutch performers in years. 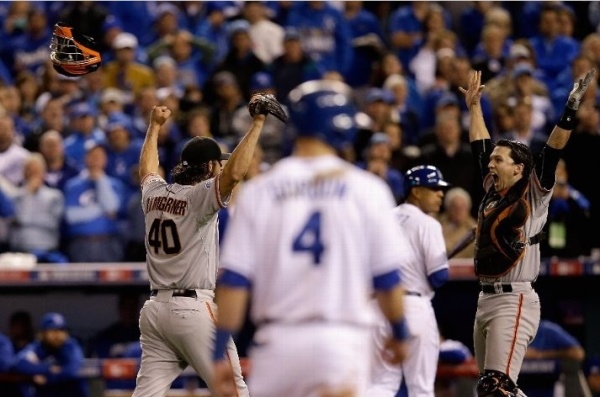 New stars were made as fresh players pushed new teams into the league’s spotlight portion of the year. Gone were the Yankees, Red Sox, Cardinals, Tigers and Dodgers of the world, and in came names that were knocking on the door of the big stage but not getting an answer until now.

Sure, the Giants have been the most successful team in the game over the past five decades, but they still are dwarfed in popularity by their own division mates in the Dodgers. Buster Posey is popular, and Bumgarner has certainly come into his own, but outside of them being respected prior to this season, no one really gave them their true due. Now after a third World Series in five years, they are quickly becoming what the San Antonio Spurs represent in the NBA, with Posey has their Tim Duncan, Hunter Pence as the unorthodox Manu Ginobili and Pablo Sandoval as the always on time Tony Parker.

What about the Royals? They became the darlings of the postseason, starting with their explosive extra-innings win to start the postseason, followed by the eight-game win streak that carried them to the World Series and finally the fight they showed in pushing out the Fall Classic for the distance. Their young ensemble stands to stick together for at least the next few years, and with the experience now to match their drive, they should be of annual relevance as well.

But what about the other teams on verge of mixing it up in late October as well? There are Andrew McCutchen and his Pirates, another team in mold of the Royals that is amid an enthusiastic recent revival. There is a lot of reason to think they are team that can get in on the National League mix over the next few years, considering the young talent they have, propensity to get the most out of their veteran arms and the aforementioned annual MVP candidate.

And the Orioles can stay relevant as well. They put up their best year in nearly two decades with three of their most vital elements in Matt Wieters, Chris Davis and Manny Machado on the shelf. With Adam Jones to build around and the duo of Kevin Gausman and Dylan Bundy on the verge of taking over the top of their pitching staff, it is no stretch to think Buck’s boys will be even better at full strength and potential.

But there is more. Mike Trout’s era is just beginning to take shape, while Bryce Harper still has his best days ahead of him. What if the Marlins can build around Giancarlo Stanton and make another of their once-a-decade drives before he leaves town? There is an entire division in the American League West that could yield contenders over the next few seasons as well. To really step outside the box of tradition, pay attention to Theo Epstein’s slow-burning project in northern Chicago that could finally take shape.

What it all leads up to is the refreshing novelty of this year’s postseason is hopefully not a one-and-done affair. With the coming of age of so many new competitors, there is so much potential for more of the unpredictable to take shape and be the booster shot in the excitement of the game — “out of nowhere.”