Every summer, there is a team that has what seems like a “breakout campaign” — a club that has been on the brink of getting over and has what looks like the pieces to make it happen, but is just waiting for the right spark to put it over the hump. Last summer, the Miami Marlins did this behind the coming of age of Giancarlo Stanton while Mike Trout did the same thing for his previously underachieving Angels club. Two years ago, Andrew McCutchen came into his own with an MVP and postseason appearance. Back in 2010, a young guy by the name of Buster Posey made his debut and fueled a run toward the pennant for the San Francisco Giants for the first time since they roamed the Polo Grounds on the other side of the country.

However, this summer has shown a handful of teams that have gotten off to surprisingly strong starts that nobody could have seen coming. The Minnesota Twins have pushed the cellar door that they've been locked in for the past half decade wide open, Black Snake Moan-style. The New York Mets continue to ride their powerhouse pitching staff over the heavily favored Washington Nationals early in the third month of the season. The New York Yankees and Tampa Bay Rays are persevering in a muddy AL East, while the Angels, Oakland Athletics and Seattle Mariners are all in distant pursuit of control of the American League’s western outpost — behind the longest shot of them all: the Houston Astros.

The Astros have been the biggest surprise of this season — and in all reality, many seasons — thus far. This is the same franchise that lost 416 games from 2011 through 2014 and had three consecutive No. 1 picks over the past three years. Now the Astros are one of the hottest properties in the game… and still gaining degrees.

Toss out the recent losing skid they have been on; that is par the course for a 162-game slate. Houston is a club that has taken its beating, survived and successfully began to turn the corner via a collection of homegrown and strategically collected talent and is now making a serious point that the time for rebuilding is over in Space City.

But it remains that, all things considered, the Astros have arrived on the scene much quicker than expected. New manager A.J. Hinch’s club blazed out of the gates on a hot streak that saw it open up by winning five of its first six divisional matchups, including a four-game sweep over the Mariners amid a 10-game overall win streak to end April and open May.

This process hit an epicenter when on Monday, the club announced it was promoting its prized prospect, 20-year-old shortstop Carlos Correa, to the Major Leagues. The first of the three consecutive No. 1 overall picks the team made starting in 2012, Correa’s prodigious rise through the minor leagues hit the level of absurdity this year when he destroyed pitching at two levels to the tune of a .335 average, 10 home runs and 44 RBI, along with 18 stolen bases and 21 doubles in just under 250 plate appearances. This is after he hit .320 and .325 as an 18- and 19-year-old the previous two years, respectively. For comparison’s sake, another tall, rangy yet powerful former No. 1 overall shortstop prospect by the name of Alex Rodriguez hit .316 at the same ages before making his debut as a 20-year-old in Seattle back in 1994. 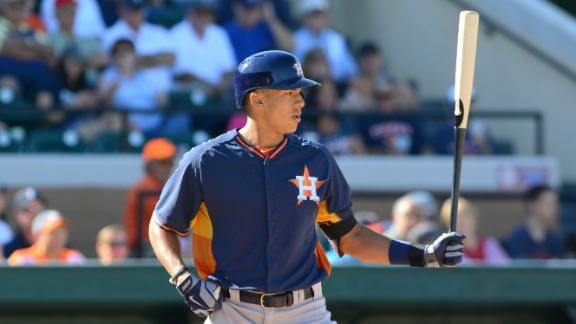 Now that is not to say that Correa will become Rodriguez (for a variety of reasons) right away. A-Rod always profiled as a greater power threat than Correa does, but the similarities are within reason otherwise. Rodriguez’s rookie year was interrupted by the strike of ’94, but with a full season to apply his craft, Rodriguez ripped apart the American League, hitting .358 and becoming the final piece to help launch the Mariners into the postseason.

What Correa’s immediate purpose stands to be could be quite similar. Despite Houston’s momentum coming back to Earth some, his promotion is not tied to him being the season’s savior. Rather, it was just time to bring up a clearly unchallenged talent to apply his craft at the highest level. Ever since Opening Day shortstop Jed Lowrie fell to injury in early May, the team has been hungry for help at the position, so the promotion of Correa just made sense from both a need and timing perspective.

Thus far, he has shown the blend of skills and impact that cosigns everything that has been said about him. During his first series in the Majors, Correa made three starts and reached base with both regularity and variety. He has a hit in each game, including a two-run homer in his second contest, along with a stolen base and a double the next day. And despite the fact his club dropped all three games, the energy of the top prospect’s presence is undeniable.

However, the enduring impact of Correa’s appearance could be that he is the final piece to the Houston puzzle. The Astros are far from devoid of talent and feature one of the most exciting young cores in the game. Jose Altuve is entrenched as the All-Star front and leader of the club, as the defending AL batting champ, hits and stolen bases king. But around him, the homegrown cupboard is stacked as well. George Springer, Dallas Keuchel and Jason Castro have entrenched themselves as valuable homegrown assets. Moves to bring in Evan Gattis, Collin McHugh, Jake Marisnick, Luke Gregerson, Pat Neshek, Will Harris and Chris Carter, the AL runner-up in home runs in 2014, have built a strategic core through small-level moves.

And now, the benefits of building a strong system via being bad for so long are beginning to pay out as well. Lance McCullers and Vincent Velasquez are high-ceiling power arms that follows the mold of top-prospect pitching success the Mets are reaping benefits from, and there are more to follow.

Everything is falling into place, but the axis of it all is the impact of Correa. If he is Houston’s instant Posey, McCutchen or Trout, he makes the 'Stros a serious factor immediately — and makes himself instantly one of the most indispensable properties in the game. From all the returns thus far, both minor and Major, that looks like a foregone conclusion.