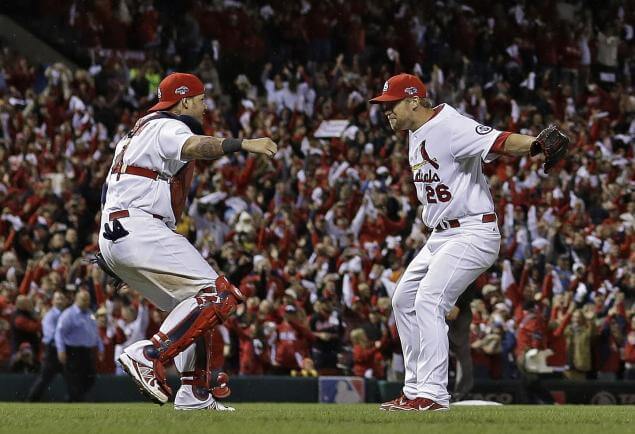 When the World Series starts up tonight, it is virtually the perfect scenario to assess who stands up last, because no more similar teams have met at the top of the MLB mountain in years. When the St. Louis Cardinals and Boston Red Sox meet for the second time in the last decade to decide the final chapter of the summer gone by, it will be more than a match-up of the two best teams this season. Rather, it transcends that — a showdown of two franchises with both recent and removed history that have taken two separate, less-traveled roads to arrive at the brink of extending the storied ways of their respective traditions.

For the Cardinals, the story is around the seeds. All but five members of the roster are homegrown properties, which goes against the grain of the times in the game. The base of their success has come from this inbred chemistry, which has carried over through the waves of contributors who have not only won together in the Majors, but also in their time together in the minors. This is the so-called “Cardinal Way,” which is truly just keeping current with the traditional ways of the game, was in place long before free agency and contract-driven roster builds altered the way champions were built forever. The Cardinals have rebuked that method, as well as refused to make deals that could remove them from their set course. It is a path that has seen them stay consistently at the top of the National League, while only getting younger and younger.

The Red Sox, on the other hand, come from a different background, and it has been one that has seen overhaul after overhaul in search of the keeping away the ghost that haunted them for so many decades. A year removed from being the most cluttered and lost clubhouse in the game, as well as a loser of more than 90 games, they find themselves back with an aura that was exclusively theirs just five years ago. After two manager changes, a year that saw them dump more than $300 million in miscalculated contracts and follow that with a rebuild of 50% of their team, the Sox not only re-emerged as the class of the American League, but they have been a clear step ahead of the rest of the pack this fall.

So what gives? It’s been nine years since the Red Sox took the fight the Cardinals and ran them out of the World Series in four quick games. These two teams that have traveled different paths to the season’s pinnacle show up in remarkably similar fashions. Both finished with identical 97-65 records and reached the Series after dramatic Game 6 efforts that ended their league campaigns decisively. St. Louis did so by facing off and defeating the game’s best pitcher in the most decisive manner he has been put down in over two years. Not to be outdone, Shane Victorino launched a grand slam that finally laid down the Tigers and ended the Jim Leyland era in sudden fashion.

Both runs have been storied for the teams, and it’s only the beginning. There are always the side pot stories that make the game complete. Can Carlos Beltran’s October legend can finally end with a ring on his hand? Can the inspiration of the city Boston continue to carry the Sox along the way? Will the coming of age of Michael Wacha remain as irresistible as it has been thus far? Can Koji Uehara continue to be the most unlikely, undeniable pitcher in the game? And can the city of St. Louis finally overcome the biggest thorn in its championship side (see the 2001 New England Patriots and ’04 Sox)?

What is to come starting tonight should be another series decided by both inches and miles. Arms like Wainwright and Wacha pitted squarely against a blanket attack led by Pedroia, Papi and Napoli. But one thing is for certain, the Fall Classic is certainly pitted to live up to its name — with two teams that certainly aren’t unacquainted with each other or a fight to pull ahead … again.

The Cardinals, Red Sox And The World Series Mirror Match