After creating waves this off-season with his thoughts on the curmudgeonly attitude many take towards baseball, Supreme Ruler of the National League Bryce Harper did what he does best in his first at-bat of the season – he smashed a home run to right field and probably had a lot of fun doing it.

The powerful lefty didn’t even get all of it either. He got under it some. And got it a little off the handle of the bat. And he still hit it out. And he’s 23. What an asshole.

The Nationals went on to win in extras, but what people were talking about most after the game was Bryce Harper’s postgame apparel. Namely, his hat, with the words “Make Baseball Fun Again” emblazoned across the front in the style of Donald Trump’s “Make America Great Again” hats.

That is an awesome hat. I would wear one. It’s Harper having fun with this ultimately meaningless war of words between him and the old guard that wants to protect the sanctity of the games from the evils of smiling, laughing and any other jubilant actions that may express joy. Sure it was meant to be funny, but a lot of truth is said in jest.

Perhaps the best part about the hat was that it led Tampa Bay Rays prospect Brent Honeywell to go on a mini Twitter rant. 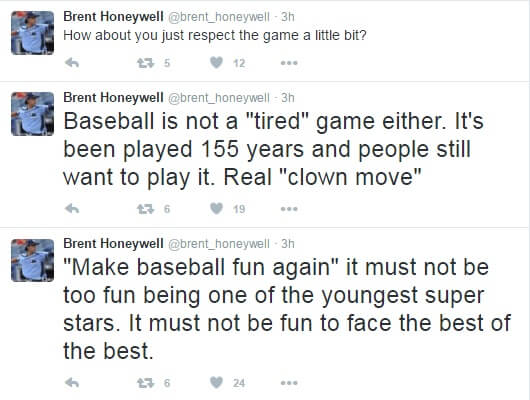 A few things with Honeywell’s tweets...

First of all, Harper never said he doesn’t enjoy or appreciate being in the Majors. If that was the case, he probably wouldn’t hustle like he does or work as hard as he does to be one of the very best the league has to offer. The “fun” he’s referring to is the extracurricular stuff like bat flips and, in general, reacting positively to good things that happen.

Secondly, Harper’s reference to baseball being a “tired game” was in relation to the unwritten rules that have so long constricted players to conforming to one way of playing the game. Expressions of joy and the processing of success is not a one-size fits all thing. The baseball 'establishment,' if you will, wants it to be just that. If you don’t conform to the unwritten rules you become an outcast – much like Harper has been.

This Harper storyline is not going away. Baseball experiencing a very drastic culture shift with significant pushback from a large group of fans and people within the game. Despite heavy criticism, don’t expect Harper to back down anytime soon.

He’s the best player in the NL, so his voice matters and he knows it. Not only that, but he’s just brash and audacious enough to fight back harder the more resistance he experiences.

Bryce Harper is hell-bent on shattering the rules that curtail so many of baseball’s personalities and turn so many fans away from the game. If watching Harper turn fastballs into souvenirs isn’t enough for you, watching him go head-to-head with baseball’s long-established unwritten rule book will be worth following all season long.