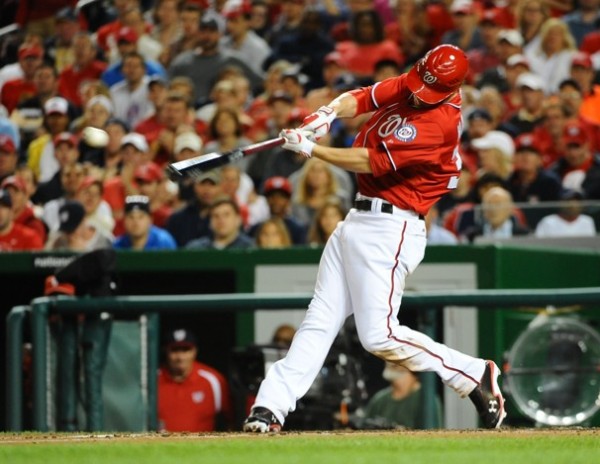 I’m going to cut to the chase here; Bryce Harper is the real deal. There’s no need to dress it up any more than it’s been suited and booted since he was an early teen hitting bombs that some MLB guys couldn’t hit already. No, the hype machine around the Washington Nationals’ teenage outfielder is a well-practiced and full-speed ahead machine.

However, the machine has shifted into its final gear now, and what a start it’s gotten off to. After a year-plus of debating and not so patiently waiting, the Nationals decided they could ignore the itch of seeing what the top pick from the 2010 Draft could do. And he has not disappointed either. His first ten games in the majors have seen him hit .300, with all but two hits being doubles, play every position in the outfield and become the youngest player to hit third at the big league level since 1996 when Andrew Jones (another ex-prodigy) did it.

Like Jones, the precocious nature of Harper was expected, but not at the rate that it’s come out the gate. See, Harper won’t turn 20 until October, yet he’s already the most versatile weapon on one of baseball’s most emergent teams. This positioning likens him to another far more notable former teenage sensation, that went on to deliver on repeat for years, take a long afterthought team to greatness and is four years away from joining the true ranks of the Baseball Gods he rightfully deserves to sit amongst.

Now before you log off or declare me a blasphemer, look at the details. The parallels are real; both debuted at the same age and just two years after being the top pick in the Draft. Both showed up at a time when their franchises hadn’t had winning seasons in their home base, ever. The crosses being bared are legit, and the expectations high.

However, they have no choice but to diverge on their tracks from here. Griffey not only inspired the Mariners, he inspired a nation and a whole generation as well with how he went about his play. His huge smile coupled with his even bigger home runs and amazing catches gave off the radiance that you’d expect from such a young man playing the game at such a rare level. Harper is not that guy. He knows how good he is, and will show it in his both his bodily language and his actual spoken one as well. He expects to be getting everything he gets, and it does not shock nor amuse him. He goes about his business in the style of yet another, more infamous former Mariner progeny…

Alex Rodriguez is supremely talented, perhaps the most talented player of the last 20 years. However, that talent will always be noted nearly equally with by his attitude and appetite for reward. He led the American League in hitting at 19 years old, and took off from there. As a reward for this early and highly successful start, he has unapologetically received $500 million worth of contracts in his life that he pushed for. He is about the business of being great, with an emphasis on the business.

Harper is an interesting parallel of both. He plays hard like Griffey does, but the attitude is 100% A-Rod. He has already made nearly as much a name for himself in hitting home runs as he has in watching them go and even laughing as he rounds the bases after them. He’ll be the guy that will court the big contracts in the future and will, without blinking, happily take on the role of the villain you have to respect. The Ric Flair of the Major Leagues, if you will; a Nature Boy in every regard. The game has been easy for him, and reaching the majors has done nothing to change this feeling. He’s the type that will struggle, play with the same attitude as if he’s on top of the world, and take the praise and criticism of both extremes the same way. He believes that much in himself…just like Rodriguez.

But attitude is part of why he’s making waves. No less than Cole Hamels saw it fit to try to humble him by throwing at him and happily accepting the suspension for it. That’s when you know you’re making waves, when the game’s best sees it fit to bring you back down to Earth some, even though you’ve even been in The Show for two weeks. But so far in the life of Bryce Harper and baseball, he hasn’t been of this Earth yet. And the way things are going now, he’s not visiting it anytime soon.

5 Replies to “The Ever Present Past & Future of Bryce Harper”