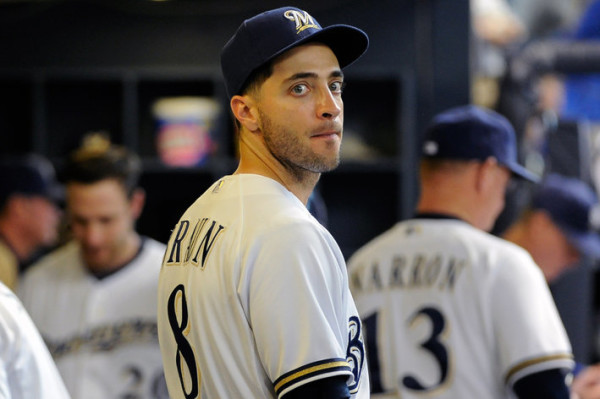 Ryan Braun used a performance-enhancing drug. It surprises some, but it shouldn't. In today's day and age, why does anything outside of a tight end accused of murder shock us?

Yesterday, Matt Whitener wrote a piece on Ryan Braun. It's a good read. He's a baseball aficionado. Please read it.

As Matt pointed out, Braun is very much the villain in today's episode of "Baseball & Order." He won't be the last. In fact, there likely won't be a final scene until the game dies. That's because the days of naivety should be over, done and buried on the side of the road. Shock — a word used for the unthought-of — can cease and desist. Unless, Derek Jeter ends up guilty. Other than that, who should be surprised to see the next big leaguer, gridiron hero or Olympian comes back with dirty urine? Let's save the surprises for the dramatic comebacks and the cellar-dweller's win streak.

Our perception of the legacy-building must die, too. The days of Lou Gehrig's speech and Jim Brown's stiff-arms are gone. They won't come back. It's simply time to stop putting our athletic heroes on pedestals. How many times over the last decade have you heard or read the words, "his legacy is tarnished"?

What legacy? We live in a society where two weeks ago might as well be the Battle of Gettysburg. Athletes are rising stars and commodities one day, washed-up the next. It comes faster and quicker than before. Legacies are built through time. Time is something we don't care to keep track of once it gets outside our weekly calendar.

There's no Mount Rushmore for the guys playing on the diamond today. Everything became more difficult to understand, despite more technology and better statistics. What makes a player a great and what makes greatness in a player continue to be blurred lines that we build inane arguments around.

Don't be fooled into believing the guy pounding 450-foot homers is clean. He might be. He might not be. Either way, he's not worthy of your belief. If he couldn't hit the ball past first base without juice, you'd beg the team to send him to some po-dunk town west of the Mississippi. Don't act like his spot in the lineup isn't expendable.

Simply, the best way to enjoy athletics today is to leave it to the results. To sensationalize — something we're great at — or demonize — we're even better at it — becomes a case for appeal without enough evidence. You want your athletes to be honest and upstanding citizens. That's something we can't commonly expect from public figures anymore, so don't put the cross on a center-fielder's back instead.

These men are making booku bucks slamming home runs that end up as game-deciding runs. When the ball flies over the monument in the bleachers, they round the bases and enjoy themselves. Damned if honesty and character are on their minds as they touch home plate.

A minor leaguer with a cannon of an arm could be your hope at a pure candidate for fandom. In eight years, he could be without a career after you discover his stellar rookie season came courtesy of a pill. Why buy in to it any further?

It's simple. For those not born in the mid-90's, we grew up in a society of Cal Ripken Jrs., Michael Jordans and Brett Favres. Older generations had their own idols. These were men we worshiped and idolized for the tall tale attributes they had. He played how many games in a row? He scored how many points while sick? He threw for how many yards immediately after his dad died?

Those men weren't heroes, although we treated them as such. But, at least they seemed honorable (at the time). Now, investigations into each sport have made it enough to think you've had a successful run as a fan if you're favorite player only had one run-in with the law or a small suspension for drug abuse.

Oftentimes, you will hear a stranger or friend describe insanity. It's doing something over and over again, yet expecting a different result. Place your pride, your belief, your trust in a guy in a jersey and risk your jaw dropping to the floor when you see him indicted on the news.

You've seen it happen before, so don't act surprised when it happens again. Some fans are insane, but not that insane. Treat yourself better and stand back with cautiousness. If he comes up a loser like Ryan Braun, you knew better. Shame on Braun, shame on 'roids and shame on what are now the commonalities of sport.

But don't shame yourself.

3 Replies to “Braun Case Reminds Us, Fans Should Know By Now”