This article is used with permission from the author, as it was originally published on January 29th at Cheap Seats Please.

Spring Training is coming around again, and thus means that all is preparing to be well in the world. The best of the best in the game are dusting off the tools of their trade and preparing to get back to business around the diamonds of Major League Baseball.

And in what has become an annual tradition here in the CHEAP SEATS, it is prime time to take stock of the best of the best in the game today at each of those roles around the field. Over the next month, the top 10 players at each position in the game will be pitted against each other and ranked to determine who the best is today.

Where else better than to start such a countdown than at the nucleus of any baseball team: with the catcher? In recent years, there has been an ebb and flow at the top of the catching mountain between the defensive mastery of Yadier Molina and the comprehensiveness of Buster Posey. While a few others have jockeyed for position, they have proven to be an air-tight duo.

It was a tale of two halves for Vogt during his breakout 2015 year. After swinging his way into an All-Star birth during a first half that saw him post 14 home runs and a .287 average, Vogt plummeted in the second half. Perhaps it was the wear and tear of playing a full slate of games behind the plate for the first time, but his numbers dipped to a .217/.280/.349 split in 51 post-ASG games and he managed only four home runs and 15 RBI in that run.

Vogt’s first half showed what he is capable of at full capacity, but it remains to be seen if he is built for the life of a dual-threat catcher.

Grandal splits some time with A.J. Ellis still behind the plate, but he is the vastly superior offensive option between the two and should see more and more time as he continues to mature as a backstop. Grandal at age 27 has battled some health issues in the past, including a shoulder injury that slowed his second half in 2015. But in being liberation of Petco Park, he predictably produced his strongest offensive year during his first full year away from it.

His eye at the plate improved last season (an increase in walks combined with a steep decline in strikeouts), which produced a career-best .353 on-base percentage. He profiles to produce plus power from behind the plate, although his switch hitting future is likely as a first baseman.

8. Francisco Cervelli, Pirates (Not ranked in ’15)

Cervelli followed in the footsteps of Russell Martin in becoming a former Yankee catcher who made the most of a full-time opportunity in Pittsburgh. In his first season as a frontline backstop, Cervelli proved that he could maintain his career trend of producing high on-base and extra base hit totals in a full-time role as well.

Of NL catchers that qualified for the batting title, Cervelli’s .370 on-base percentage was second behind only Buster Posey –and by a slim .009 margin. He also added in an eye-raising total of five triples, which shows a rare athleticism for the position as well. Cervelli profiles to continue to rise further and further up the power ranks of MLB catchers in the immediate sense.

While he did not make a return to the All-Star Game again in 2015, Norris still produced a strong season amid his transition to the National League. He set career-highs in games played (147), hits (129), runs (65), home runs (14) and RBI (62). Albeit, these counting stat totals are dampened by an extreme fall off in his on-base percentage and a huge jump in strikeouts.

Yet this is all balanced out by the fact that he has become a much more mature backstop in the process. He threw out 17% more would be base stealers last year and guided the talented Padres staff well. Further NL familiarity could provide for his most balanced season to date this upcoming year.

McCann remains the most reliable and consistent power conduit at the position in the game. 2015 marked the eighth consecutive year that he hit at least 20 home runs. This should be given due deference, especially considering that the only other catchers to do this in the history of the game are Hall of Famers Mike Piazza and Yogi Berra.

Furthering the point, it was the ninth season overall that McCann reached 20 long balls, which joins him with Johnny Bench and Gary Carter as well as the only catchers to reach that level.

His consistency is shown in the fact that he also played in 275 of the Yankees’ 324 games since he joined the club before the 2014 season, with 234 of them coming behind the plate. He’s a silently, consistent soldier amid baseball’s most spotlighted team.

Injuries kept Lucroy out of the lineup for a little over a month last season and also slowed his production at the plate from hitting full mass until late in the year….just in time for a concussion to end his year prematurely. However that should not erase the memory what he was capable of doing at full speed just two years ago. The master pitch framing technician finished in the top 5 in NL MVP voting, after producing a .301 average to go along with 66 extra base hits.

With his health abiding, as well as a stated desire to play for a contender (something that he will not be a part of in Milwaukee) this year should an audition year of sorts for the 29-year-old backstop, as he either vies for a trade or simply proves that he still is who we (or perhaps “I”, based on this ranking) think he is.

The most constant presence amid the Royals’ rise to the top of the baseball world, Perez is by and far the game’s top young backstop and has continued to affirm that position. He will enter the season at only 25 years old, but has taken home the past three AL Gold Gloves at his spot and has been an All-Star thrice in as many seasons as well. During this run, he has topped 70 RBI and 25 doubles in each year, and has reached a new career-best in home runs in each season thus far, with 21 representing his new peak.

Considering the high volume of innings he logs (he has logged 2,440 innings behind the plate in the past two years) he could stand to do much better with his patience at the plate (he walked 13 times in 553 appearances last year –Buster Posey walked that many times in the month of September last year). However, he is a big, tough, formidable two-way threat, who’s best days are still ahead of him.

Martin took well to his new surroundings in Toronto last season, and was a major catalyst in breaking the Blue Jays’ 20+ year drought. He turned a career-year offensively, with new personal bests in home runs (23) and RBI (77), well as a six year best in slugging percentage. It was the fifth straight year he topped 60 RBI, and also marked the 4th time in five years that he hit 15 or more homers while posting an OPS of greater than .700.

But where Martin makes his biggest impact is between the lines via intangibles. He makes a pitching staff better when it is throwing to him, as well as limits the ability to take the extra base. The soon to be 33-year-old cut down an AL-best 44% of would-be base thieves, while working the Jays staff to a 3.88 ERA as well.

2015 was probably the most difficult season that Molina has had to endure in his career. A ligament injury in his thumb shortened both his regular season, as well as his postseason (and one that has carried into his 2016 start as well). This was after struggling through the season with lingering issues from a knee injury suffered the year before. The result was a five year low in offensive output across the board nearly, albeit still producing a respectable 61 runs batted in, 23 doubles and working his way to seventh consecutive All-Star Game.

However, what did not diminish was his perennially unparalleled defensive impact. Molina won his eight consecutive Gold Globe by catching 41% of would be base stealers (only 37 runners attempted to steal on him all year), converting 9 double plays and allowing only four passed balls. Add in the fact that Cardinal pitching worked a MLB-best 2.80 ERA when he was behind the plate in route to a 100-win season, and it goes to prove that impact comes from far more than just the clearest parts of a box score.

The class of the position by far, few players combine more raw talent with inherent leadership and intangible presence than Gerald Posey does. His perennial standard has reached such a clip that they are better compared to those already in Cooperstown than most of his peers, and he still yet to reach his 30th birthday. Buster led all MLB catchers in hits (177), batting average (.319, 4th in the National League), RBI (95) and OPS (.849). All of this combined saw him produce just over six Wins Above Replacement –three more than any other catcher.

Already the owner of three World Championships, an MVP, a batting title, three All-Star appearances, three Silver Sluggers and a .310 career average (the 4th highest of all-time for a player that has been primarily a catcher), it would seem that Posey has it all. And that’s because he does, but he is only halfway through the race and is just now approaching his prime. 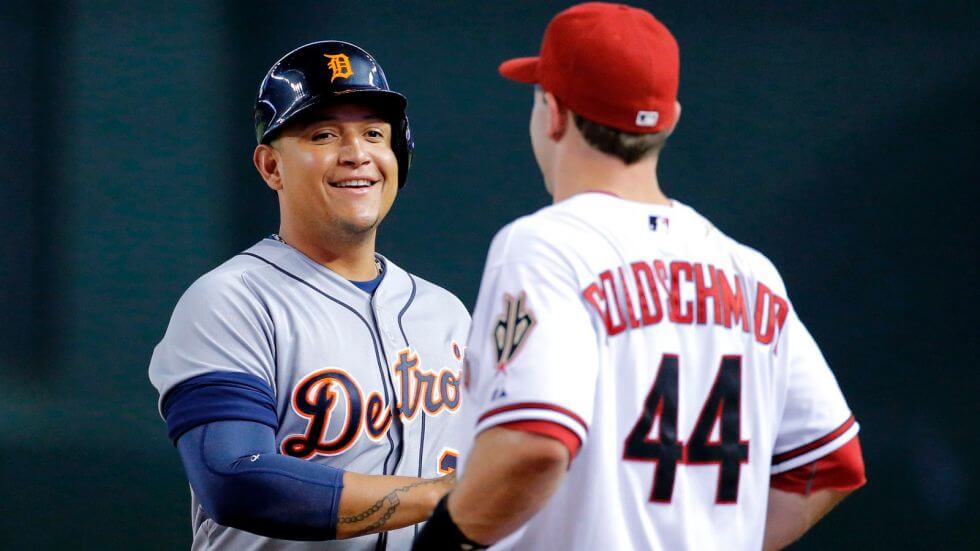