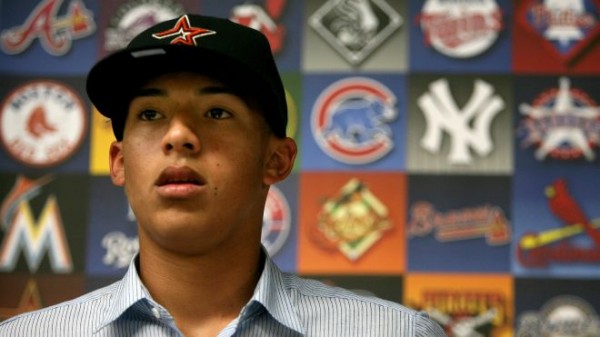 Did you know that the MLB Draft was this week?

Okay, let’s rephrase that. If you aren’t very active in social media, did you know that the MLB First-Year Draft was this week?

It’s the conundrum baseball has been faced with for decades. And though the first round was televised on MLB Network for the third consecutive year, the relatively small spotlight on the Draft is still stunning when you consider the bandwidth the sport takes up in the warmer months.

Sure, we’re transfixed on the NBA playoffs, the Stanley Cup Final, the upcoming Euro ’12, major pay-per-views in boxing and MMA, the French Open, and the ongoing games at the ballpark. Yet, in anticipation of its eventual summer dominance, what better way for the sport to keep itself in our purview than adding some hype to its selection draft?

[Oh, wait… that promotional might won’t be spent on Red Sox/Yankees? Nevermind, then.]

For starters, and quite possibly the central issue of this matter, is that there is little to no connection between the draftees and the fans themselves. We know next to nothing about these guys until they get called up to the big leagues or, more than likely, get traded for an established player.

This could be baseball’s blessing, in some way. Whereas football and basketball players are subjected to a relentless torrent of public attention since they experienced beyond-average growth spurts, baseball players tend to live in a less intense spotlight (save for select local fans, media and scouts). With such rare exceptions of the ready-made major leaguer – Ken Griffey, Jr., Alex Rodriguez; recently, Stephen Strasburg and Bryce Harper – they are essentially fermented like yeast (shout out to the junior high for teaching me that science) in the minors until called upon… if at all.

Yet, one can’t help but to wonder what just a smidgen of publicity beyond a post-draft press release could do.

Friend of The Journal, Matt Whitener breaks this down in a more elaborate manner for Cheap Seats Please, but there was something in particular that stood out:

“In an odd way, MLB faces the same kind of notoriety struggle that the WNBA faces in getting its players out there. For overall popularity increases in the sport, the casual fan has to have more of an interest in the common player on the way up. The best way to do that is to use the MLB Draft the way movies use trailers: build the buzz, let folks know what’s coming and get the clock ticking towards those hopeful ETA’s. This helps pro baseball’s profile, minor league baseball’s spotlight and gets folks trying to get the jump on each other in both college and high school viewing. Sounds like a classic game of domino rally to push the sport ahead to me.”

Buzz, even when it is borderline ridiculous as is the case with the NFL Draft, works. Yet, the truth is that no matter what machinations Major League Baseball comes up with or scribes ponder, there’s one significant change that can be made which will give the Draft a greater spotlight.

I say amateur because while it’s still a controversial decision to broadcast high school basketball and football, it has been done in the vein of ‘seeing the future now.’  When LeBron James was bestowed with the greatest hype of a prep star in basketball history, his games were nationally broadcasted. More prep schools began finding ESPN and other broadcasters in their gymnasiums, as The Next Big Thing(s) were given a bigger platform outside of the high school basketball reporters for their local papers or ‘scouting services’ funded in part by the shoe companies.

As for the college end, it’s hard to think that there’s a lack of bandwidth to fit these games on sports networks. Outside of ESPN’s coverage of the College World Series, regular broadcasts from the Big Ten Network (if you have it), and those from the nearly-invisible CBS Sports Network, there’s not much for baseball fans to pick up on when it comes to the future of their favorite teams. Regional sports networks show said future on occasion when they feature minor league games, but the exposure of major collegiate programs that feature potential big leaguers can be enhanced with broadcasts that go beyond a college’s journalism school.

There have been plenty of internet write-ups that have either sharply criticized or outright mocked Major League Baseball for its handling of the Draft. The powers that be have heard them for a while, but we don’t know if they are truly listening. Maybe they are actually okay with the relative anonymity of its Draft; as if it’s another tradition they are fighting to hold on to against the changing times.

No one’s asking to see EVERY single draft pick here. After all, there are up to FORTY rounds in the Draft. However, this is an instance where baseball seems to take its fans for granted. This is a league that still admirably celebrates its past – too often at the sake of the present – yet forgets to prepare us for its potentially great future.

3 Replies to “Baseball’s Anonymous Future: Anyone Else Feel That Draft?”

Baseball’s Anonymous Future: Anyone Else Feel That Draft?

Baseball Pulling the Pastime Into The Present