(Ed's Note: Today, we are fortunate to have one of our brothers give his testimony as to what happened during the infamous "Infield Fly Rule" game between the St. Louis Cardinals and the Atlanta Braves. Larry Luk "Shocked The World" at Turner Field, and his story will be heard today on TSFJ. Enjoy.)
Friday morning, I went to work, much to the exasperation of the company accountant. Being a huge Braves fan like myself, he asked me, "Why'd you even bother coming into work today? You need to get down to the stadium." My answer was easy: I had some work to finish. Just like most of Atlanta, we had our daily responsibilities, and the baseball scheduling gods (aka Bud Selig, TBS, and FOX) weren't doing us any favors. The Braves vs. Cardinals Wild Card game was scheduled for 5:00 pm. If you've ever been to Atlanta, you'd realize that beating rush hour traffic to arrive at Turner Field by the National Anthem is a victory in itself.
Back at my desk, I fired off a few e-mails, and as the clock struck high noon, I was out of there like a bat out of hell. I was doing it for my love of baseball, my childhood memories of watching the early 90's Braves on TV, and for Chipper Jones.
I raced home to walk the dog, throw on my 59Fifty cap, and to meet my friend, Joah Spearman, who had just flown in from Austin, Texas to attend the game. The time: 12:45pm.
By 1:30 pm, we had taken the back roads (avoiding the interstate altogether) and parked at the old gas station by The Ted that I always park at for ballgames. Only this time, it was $40 instead of the usual $20. "It's playoffs, homie" was the attendant's blind excuse. Whatever, we were there and we were ready to see history. We were doing it for Chipper. 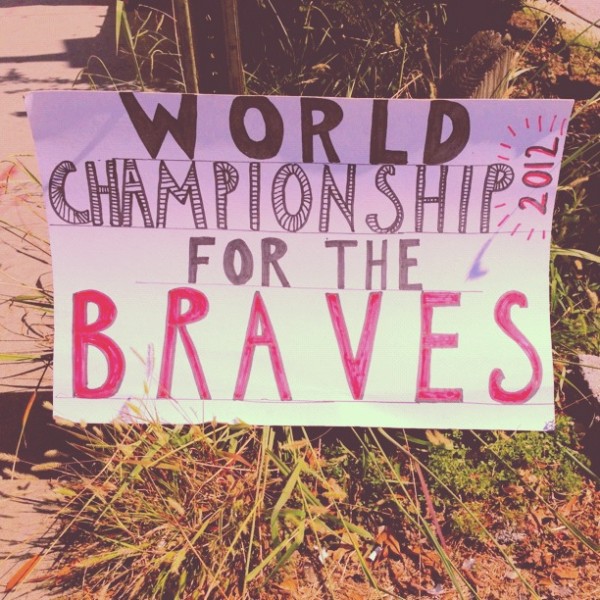 We decided to meet up with some friends on the other side of the stadium for some tailgating. As we walked, I could feel the excitement in the air. The MLB Playoffs were back in Atlanta, and we were ready. Our team could do anything. Braves fans were everywhere. You could cut the anticipation with a knife. We passed a handmade sign that read "World Championship for the Braves, 2012". I thought to myself, "That's a bold statement, but not impossible. It's playoffs and anything can happen. We're doing it for Chipper." 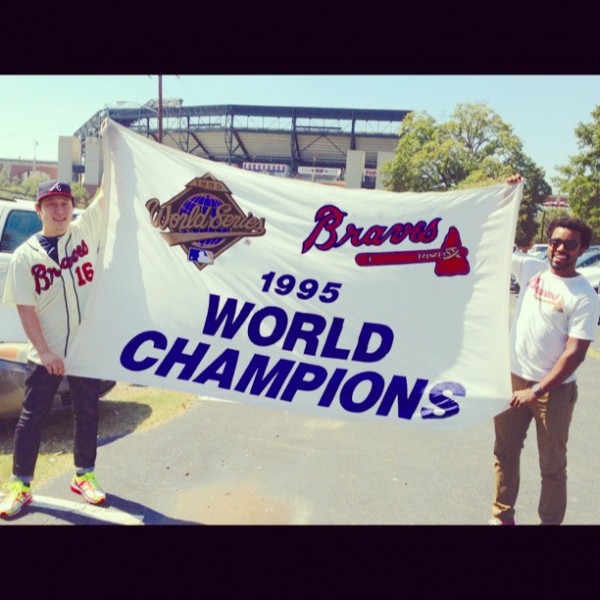 The hours leading up to first pitch consisted of posing with the actual 1995 World Champions banner (how it ended up in the parking lot is another story in itself), having beers upstairs in the Chop House with another set of friends and convincing ourselves that the Braves could very well go all the way. They just needed a win to spark them through October. After all, they were doing it for Chipper.
The pre-game ceremonies began with a flurry of foam Tomahawks. Turner Field was at standing-room-only capacity. One has to wonder how the stadium was that full by 5 pm on a Friday. People must have sacrificed their workdays and potential gigs, just as I had. As a longtime Braves fan, I cannot recall a Tomahawk Chop Denisty Level as I experienced on Friday. This was the moment we'd been waiting for all season. Game 163. We had withstood the grueling Atlanta summer; it was a long season, these tickets were not cheap, but we didn't care. We were doing it for Chipper. 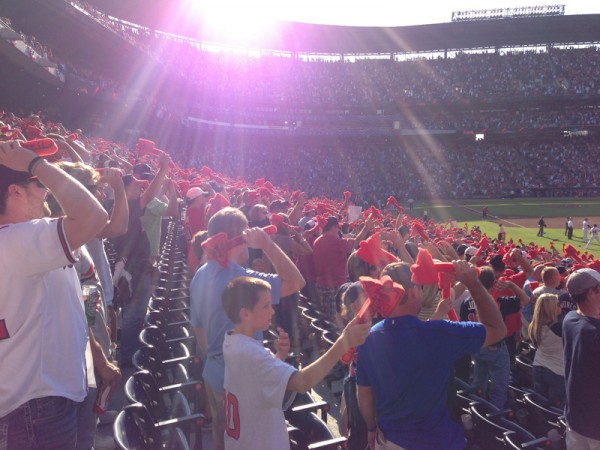 Everyone was on their feet the entire first inning. Braves ace, Kris Medlen, did not disappoint. Two strikeouts, one hit batter, and a routine ground out. The Ted erupted with every called strike. This was the playoffs, a time of the year where every run deficit felt like five runs; where every run lead felt infinitely small.
By the top of the second, neither team had scored. St. Louis' catcher, and resident neck-tat representative, Yadier Molina, came to the plate and smacked Medlen's delivery so hard that everyone collectively gasped as the baseball soared towards the right-field wall. What was probably only a few seconds felt like an eternity in the minds of Braves Nation. Gulp. Our only hope was that right fielder Jason Heyward was indeed tracking the ball with his eyes and that he'd be able to make a play on the ball. He leapt. I zeroed in on his glove as he reached over the wall. The ball hit the palm of his glove and disappeared. Then a flash of white as the ball snow-coned itself into the fingertips of his mitt. I couldn't believe it! He'd saved a run! He'd changed the game! The stadium erupted! The air was electric. This was playoff baseball, and J-Hey was doing it for Chipper.
We experienced similar joy during the bottom of the second as catcher David Ross homered, scoring himself and Dan Uggla. The Bravos were up 2-0 and we were on top of the world. Freddie Gonzalez' decision to start David Ross over fan-favorite, Brian McCann, made him look like a genius. Freddie and David were doing it for Chipper.
Top of the fourth: Blame it on pizza. I left my seat for a majority of this inning, as I had been drinking now for five hours without eating. I had to get a slice of Peachtree Pizza, and it was more important than anything else at the time. I fear that my hunger for pizza jinxed Chipper into the throwing error that led to the Cardinals scoring three runs that inning to take the lead that they wouldn't relinquish. I was doing it for pizza.
Bottom of the fourth: The fix was in. The Braves executed a suicide squeeze play, yet weren't rewarded as shortstop Andrelton Simmons was called out on batter interference. Batter interference is a rare call that occurs less than a handful of times in an entire baseball season. We couldn't believe the call, yet we still believed in our team. Surely the Braves could overcome this adversity. Chipper magic was bound to happen, right?
By the bottom of the eighth, the Braves had committed several more errors and the Cardinals had taken advantage of their opportunities to push their run total to six. The Braves, with their three runs, were down, but not out. We had our rally caps on, because we believed. We'd witnessed walk-offs hits and come-from-behind-wins-aplenty this season. The Braves were dialed in.
Only surrendering one out, the Braves had two runners on base with shortstop Andrelton Simmons coming to the plate. Simmons popped the ball up behind Cardinals shortstop Pete Kozma. The ball, towering and drifting into left field, caused Kozma to run backwards, more backwards, then even more backwards… Kozma then bailed ship so left fielder, Matt Holliday, could make the play. But Holliday expected Kozma to make the play as the ball, destined for grass, plopped innocently in between the two. Simmons had singled and the bases were loaded! The exuberant crowd knew what time it was: Brian McCann was coming to the plate to pinch-hit with the bases loaded and one out. This was the rally. This was postseason magic happening in front of our eyes! But wait… I looked back out onto the field to see Braves manager, Freddie Gonzalez arguing sometime with the umpires. What could this be? There was confusion in the stands.
We soon caught wind that left-field umpire, Sam Holbrook, had raised his fist in the air to call the infield fly rule. This meant the bases weren't loaded. Simmons was out and the natives were not happy. Almost automatically, fans began their protest by throwing anything and everything within reach onto the field: full beers, shoes, nachos, popcorn, and souvenir baseballs. We wanted our out back. This was not the Atlanta sports fan's classiest moment, but this needed to be done and Major League Baseball asked for this. During Chipper Jones' post-game interview he said, " I know one thing is for sure: you won't be able to say that Braves fans don't care. They came out in full force tonight, 50,000 strong. We love each and every one of them." 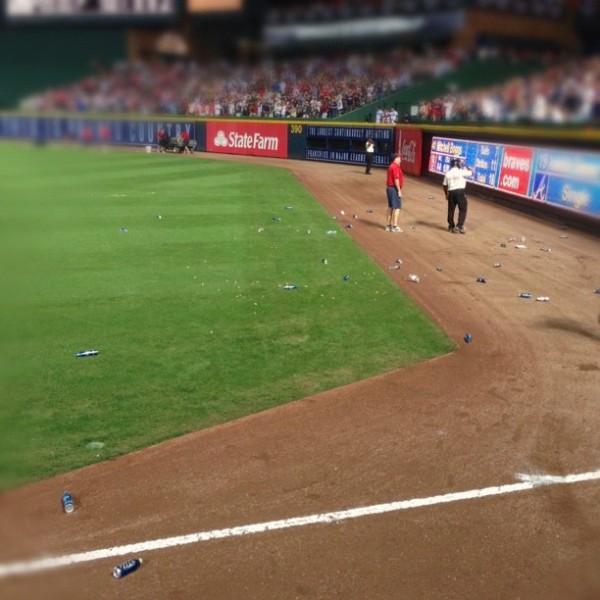 You see, the Braves finished the season six games ahead of the Cardinals. It didn't make sense that they'd have to play a one-game winner-take-all contest against them in the first place. Major League Baseball wanted a Game Seven scenario, and we were there to make sure they got it. They caused some of us to travel across the country on a day's notice. All of us missed work and overpaid for tickets and parking. We were going to get a fair shake. The Braves weren't supposed to have their momentum killed like this! 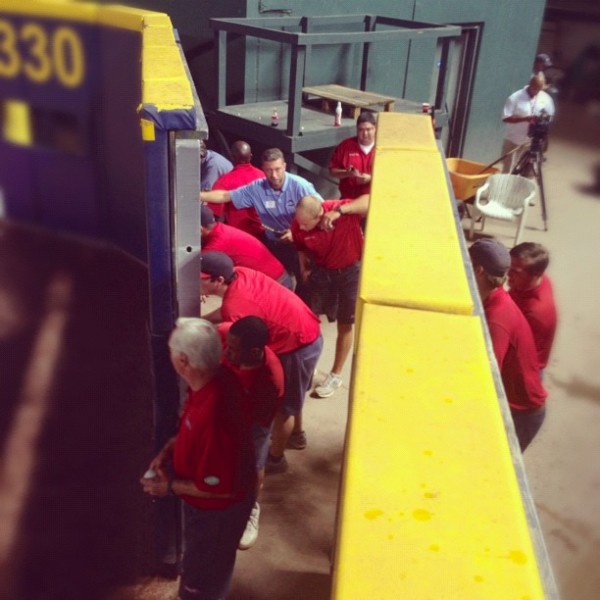 Dissecting the play: First, the rule states that "Infield Fly", introduced in 1895, shall be declared immediately upon an umpire's determination that a batted ball has become an infield fly. Sam Holbrook didn't indicate the rule was in effect until over five seconds into the ball's six-second flight time. Secondly, Joe Torre, Executive Vice President of Baseball Operations, stated, "Once that fielder establishes himself and he has ordinary effort on the ball, that's when the call is made. So it wouldn't matter whether it was from third base or on the line out there. It's all based on what the fielder does. That's what I went on, and that's what I read." What really happened was a coincidence of mis-communication and presumption. Yes, Kozma did indicate that he was positioned to make a play, but since he was relatively new to the Cardinals system, he peeled off at the last second, perhaps paying deference to Matt Holliday and letting him make a play on the ball. This mis-communication was the postseason magic we had been waiting for, only it was stifled by an over-presumptuous umpire and an antiquated rule.
In my opinion, the rule should only take effect and record an out if the ball is actually caught, causing defensive players to be responsible for some kind of action, whether it be catching the ball or throwing it to a base to record an out.
The Braves officially protested the game, yet Joe Torre wasn't about to determine that an out should be given back or the game should be replayed from that point on. Joe was doing it to cover his ass. The MLB was proud of Joe for conceding nothing.
The Braves weren't able to overcome the three-run deficit, and my only disappointment is that the game wasn't determined by the players on the field alone. I can swallow the fact that errors contributed more to Friday's loss than anything, but I will forever be salty that we never got to see what would've happened if the eight- inning rally wasn't stifled on an umpire's delayed-judgement call. 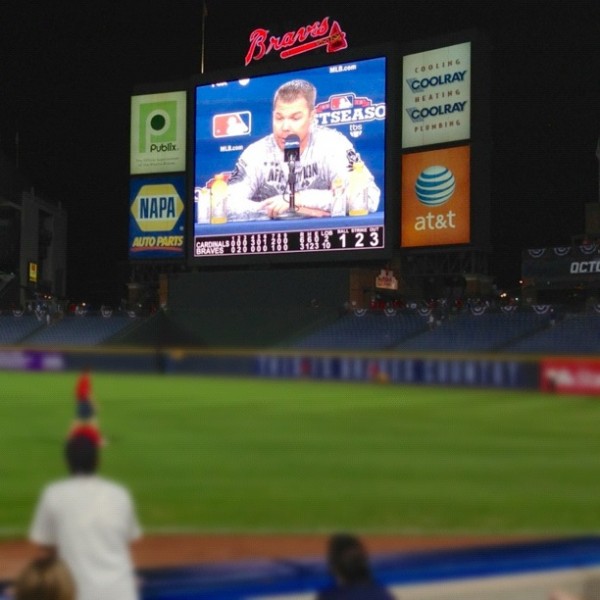 Thus begins the legend of Major League Baseball's Infield Fly Rule Wild Card Classic, and at least I can say I was there. Beer me, my arm's warmed up.