The American League was a gauntlet this year in a way that it rarely has been in recent memory. For the majority of the season, it was devoid of a singularly dominant AL East club that set the pace. Instead, it conceded to an undeniably steady Kansas City Royals team, while the other divisions seemed to endlessly ebb and flow.

Gone were the Detroit Tigers and Anaheim Angels atop their respective divisions, and back en vogue were the Texas Rangers and New York Yankees, formerly dominant teams that had lost their way in recent years.

Yet there were also upstart teams such as the Houston Astros, Toronto Blue Jays and Minnesota Twins equipped to fight it out to the end for the rights to one of the five postseason positions as well. But when the dust settled, the Royals, Rangers and Blue Jays handled their business outright, while in the Yankees and Astros were left with a broken pool stick between them and a fight to the death to be able to continue their seasons past tonight.

With that being said, there could not be two more different teams that will face off to begin the MLB postseason in the AL Wild Card game. The veteran-laden Yankees, with years on top of years of experience at their fingertips, take on the youngest team in the AL in the Astros, who have gone from energetic upstarts to shocking adept survivors, with each man playing on a wing and prayer to prove he is legit.

But who will emerge victorious in the showdown between the two diverse entities? Here are five distinct situations that will decide who walks into the AL Division Series in Texas on Thursday and who bids their season farewell tonight in the AL Wild Card game.

1.) Who will Dallas Keuchel be on three days rest?

By all accounts, Keuchel has been the standard bearer for AL pitching this year. The 21-game winner has been the favorite for Cy Young honors for nearly the duration of the season, and it would be ludicrous for him to not be considered for the start. But despite all of his success on the year, the odds could be considered stacked against him.

He has only made one start in his career on less than four days rest, which came back in 2013 and in a much different scenario than the one ahead of him. Add in the fact that he is making his first playoff start, on the road and against a veteran Yankee team that will be ready for the moment, it is a daunting situation for any pitcher. The playoffs can put quite accomplished pitchers in completely different situations, and how he adjusts — or doesn’t — will set the pace for how the game goes.

2.) Can the Yankee lefties rise to the occasion?

The Yankees lean heavily on the contributions of Brett Gardner, Jacoby Ellsbury, Brian McCann, Greg Bird and Didi Gregorius, as well as switch hitters in Carlos Beltran and Chase Headley, who are more effective as left-handed hitters.

In turn, Keuchel was a spear in the Yankees’ side this year, going 2-0 over two starts and striking out 21 in 16 innings. This is the last guy NY wants to see, but the aforementioned shortage of rest could make him an easier mark, potentially.

Yet, it could also be another night where the unlikeliest of heroes for the year, a certain Mr. Alex Rodriguez, will be looked at to set the pace again.

3.) Can the Yankees hand their bullpen a lead?

If the Yankees can carry the game into the late frames ahead, things bode well for them. Armed with the game’s best late-inning duo of Andrew Miller and Dellin Betances (who combined for 231 strikeouts and 1.73 ERA on the year), they are nearly a lock when ahead late. If they can carry a lead past the sixth inning, they have an insane .957 winning percentage. 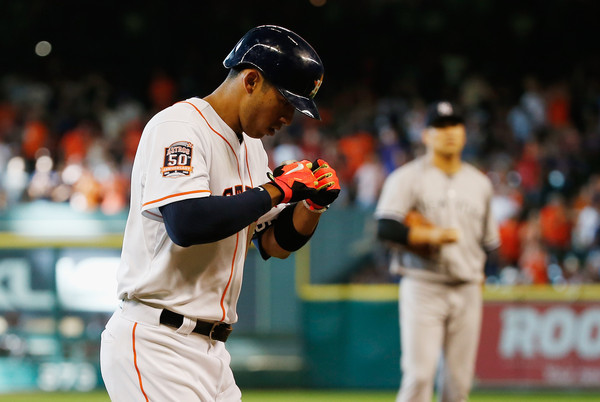 Masahiro Tanaka will take the ball to start, but he has been shaky as of late. If he can hold course and get the free-swinging Astros to chase after his plethora of dancing breaking balls, there will be a fairly certain chance of the Yankees walking away with a victory.

4.) Who can make the biggest impact via the long ball?

Neither team is shy about putting on a light show over the outfield walls, with both finishing in top five in the Majors in home runs on the year. The Astros had 11 different players reach double digits in homers, while the Yankees' flare for the big moment saw them hit 47 three-run (or better) homers. It could be a game decided on the back of one or two swings alone.

5.) Will Yankee Stadium be too big for the Astros?

Finally, there is the element of the intangibles in play. The game will be in Yankee Stadium, the mecca of postseason baseball. The Astros, who carry an average age of 27 years young and are just three years removed from a 111-loss year, are treading in new depths of water that is this time of year — and they're being heaved in the deep end with the assignment of heading into the Bronx.

While environment plays a big part in postseason leverage, thus far in the history of the MLB Wild Card Game, the home team is playing to a 2-4 record across the board.

Anything can happen in October, and tonight's AL Wild Card game is primed to potentially see that trend continue to thrive.

2 Replies to “Yankees-Astros: 5 Critical Questions That Will Decide The AL Wild Card Game”