A full-circle theme defined the preseason of the 2015 Minnesota Twins. Longtime manager Ron Gardenhire — who, it should be said, is still immensely popular in the North Star State — was gone. The team replaced him with Hall-of-Famer and former Twin Paul Molitor, a Minnesota native and, like Joe Mauer, Cretin-Derham Hall graduate. Fan favorite Torii Hunter returned to the Cities as well after an extended vacation in Anaheim and Detroit.

They were the type of moves that appeased an increasingly desperate fan base. Minnesotans like success, and they can only wait for it for so long. But, they also like heartwarming tales that can ease the burden of a brutal climate. Molitor and Hunter were just that.

Still, an almost funereal mood followed the club. The days of the Piranhas, Everyday Eddie, Torii, Johan, Gardy, Cuddy, Morneau, Kubel, Koskie and Radke, and maybe even the good old Minnesota boy Mauer, were over. The 2015 season would be a gift of goodbyes, while the new crop of Twins nudged them off the diamond.

No one expected much in April, and fans didn’t see much. Minnesota finished the month 10-12, already behind the eight ball in a division that featured three, or maybe four, bona fide contenders at the top.

But then … hope. The Twins rolled off 20 wins in May to climb to the top of the American League Central. Somewhat miraculously, they stayed in contention into the last weekend of the season while ranking 12th in slugging and 10th in ERA.

The bullpen let them down one too many times. And Byron Buxton, wunderkind, disappointed in his 46 games. Yet Hunter smacked 22 home runs, and Brian Dozier led all AL second basemen with 28 despite playing his home games in the cavernous Target Field. All the while, Molitor steered the ship with the steady hand of a World Series MVP.

But this Twins team was really about two players: one who continues to limp his way to the end, another who announced his presence in a big way.

Mauer, coming off a concussion and a position switch, looked like a shell of his former self. His batting average dipped below .270 for the first time in his career. His line drives became line-outs. His ground-ball singles became ground-ball double plays. The man who was celebrated as a hometown hero since the day he turned down Bobby Bowden and Florida State in favor of the Twins — and then built his hero status by winning the 2009 AL MVP in astonishing fashion — now became something of a pariah. Mauer’s contract — eight years for $184 million — maxed out Minnesota’s payroll. And the fans, patient and grateful for so long, finally turned.

It was sad to watch, especially from afar. When I left for college in 2008, he was the state’s most popular citizen, not to mention a surefire Hall-of-Famer at 25. Seven years on, and he’s lost his status on both accounts.

Just when Mauer dipped, though, Miguel Sano came to town. And he, unlike his predecessor, delivered power to match the promise. Sano’s home runs became nightly highlights in Minneapolis-St. Paul and beyond. Projected over 162 games — the 22-year-old appeared in 80 — his line would read: .269 batting average, .385 on-base percentage, .530 slugging, 36 home runs and 105 RBIs. He’s the Twins' version of Mike Trout or Bryce Harper, an uber-prospect who pays immediate dividends. 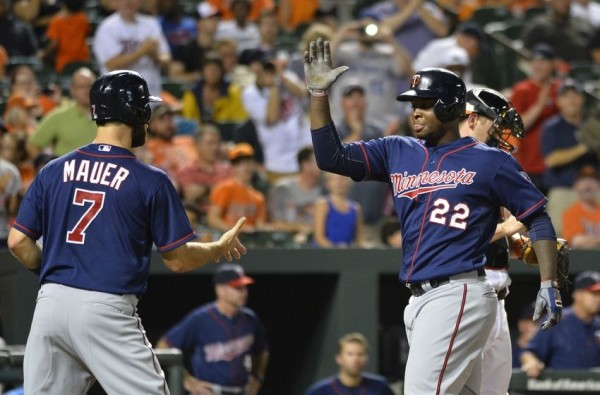 And yet you can’t see Sano’s baby face without catching the weary eyes of Joe Mauer. Such is the bittersweet life of the Twins fan, condemned to watch a near-playoff miss. They always seem to let you down. But they never do. And there's only promise on the horizon, despite the fading of a Minnesota icon.