There was a time when being the mid-major team in America was both a noteworthy title and an unwanted crown worth wearing.

Teams like Butler, VCU, Wichita State, Saint Mary’s, Gonzaga and Xavier would lay waste to their opposition in a conference we’d never heard of. With gaudy win-loss totals, upset victories on their resumes of teams in major conferences and players with fun names like Cleanthony, Samhan and Dickau, getting wrapped up in Mid-Major Madness was a fun time in college hoops.

While the mid-major elite liked the newfound spotlight, they didn’t always like the moniker that came along with it. The name mid-major itself came across as less than to some, and the supporters of these institutions really only wanted one thing. Respect.

Of course, if we’ve learned anything from the old ancient sports proverb, it’s that respect is earned — not given.

In 2011, VCU’s run to the Final Four alongside Butler’s near-win for the National Championship made sure that the ceiling would never be the roof for a mid-major again. Moreover, the explosion of TV revenue, the new found exposure for broadcast rights for more conferences and the expansion of conferences made for higher profiles for the mid-major elite. Teams like Butler and Xavier are now members of the Big East, Gonzaga’s games are almost always nationally televised, and Wichita State’s Gregg Marshall can be one of the ten highest-paid college coaches in the country. The mid-majors have earned their spot, and respect has now been paid. Literally.

In an act of full disclosure, I used to live in Cincinnati for over six years and covered college basketball in the area for publications like SLAM, SB Nation and The Sports Fan Journal. As such, I’ve formed a ton of relationships with folks at Xavier, so I’m going to be as direct as possible about this, okay? Okay.

It doesn’t mean they don’t respect Gonzaga and admire the growth of their program, but when pressed on who has the better program between the Musketeers and the Bulldogs, X fans aren’t here for the argument.

“Why would you ask me a thing like that? It’s not even close,” says Xavier alum Richard Vaughn. “Xavier shuts down Gonzaga, just look at the resume.”

It’s hard to debate Xavier’s curriculum vitae over the last 30 years, as the run of head coaches who have come through Dana and Victory has been nothing short of remarkable. From what was kicked off by Pete Gillen and was carried for the next couple of decades by Skip Prosser, Thad Matta, Sean Miller and now Chris Mack, the program has constantly found molders of young men to help lead their teams to success. Some of those young men would go on to being successful pros in the NBA, while others would find their way into the coaching ranks…just like X’s current coach, Mack.

With eight appearances in the Sweet 16 and three in the Elite 8 since 1990, the Musketeers have done work. More impressively, in that same time, they jumped from the Midwestern Collegiate Conference (now the Horizon League) to the Atlantic 10, to now the Big East. Gone were the days of playing conference championships in Dayton, now they were playing in the Mecca of Basketball aka Madison Square Garden in New York City.

“Gonzaga’s good,” said Vaughn, as he prepared to get tickets to the game in San Jose. “But they haven’t left that conference or achieved anything we haven’t in the tournament. I’m glad we get to the face them to go to the Final Four.”

It’s true that Gonzaga hasn’t stepped out of their conference comfort zone since they joined the West Coast Conference back in 1979, but the Bulldogs must still be shocked that they’re even where they are after looking at their history. Gonzaga had never even been invited to an NCAA-sanctioned postseason tournament until 1994, but the Bulldogs had their ‘shock the world’ moment in 1999 when Dan Monson led program heroes Richie Frahm and Matt Santangelo to an improbable Elite 8 run.

That run was the building blocks that birthed the Mark Few era in Spokane, and an 18-year streak of Gonzaga making the NCAA tournament.

However, while the public views the postseason runs that Xavier, Butler and Wichita State have gone on in the past as awe-inspiring, many view Gonzaga as underachievers in March. Reason being? Gonzaga’s recruiting of higher profile players alongside occasional big wins versus non-conference foes was countered against their gaudy win-loss records while playing in a lower-tiered conference. While Gonzaga doesn’t have total control over who will and won’t schedule them or how they’re seeded by the selection committee, they do have control over how they perform in the tournament.

As such, Gonzaga’s been upset six times in the last 15 years in the NCAA Tournament, thus busting millions of people’s brackets who put faith in their seeding and buying into all those wins.

The real question is how good is Gonzaga supposed to be? Since 1999, the Bulldogs have eight appearances in the Sweet 16 and three in the Elite 8. The same as Xavier, in less time. Is this output not good enough?

“We’re in the Elite 8, and nothing from here on out is supposed to be easy,” said Xavier’s Quentin Goodin after edging Arizona in the Sweet 16 on Thursday. “It’s Gonzaga; we know they’re a great team. We’re a great team too, and we’re ready to claim our glory.”

Glory is what’s on the line for both schools. While teams like Butler, VCU and Wichita State may have gotten closer to the mountaintop, no two teams with the mid-major designation have carried it further than the Bulldogs and Musketeers. While the winner on Saturday will have a feather in their caps over their Jesuit brethren that are separated by 2,000+ miles, the truth is that college basketball is better because of both programs. The bandwidth of what seems possible is as high as it’s ever been. A team from Spokane is a No. 1 seed in a region? A No. 11 seed from a non-power conference school is in the regional final, and we’re not even surprised?

Here’s a tip of the cap to both programs, and hopefully we get a game for the ages on Saturday night in San Jose.

2 Replies to “Gonzaga vs. Xavier Is The Final Battle In The Mid-Major Wars”

Gonzaga vs. Xavier Is The Final Battle In The Mid-Major Wars

by Eddie Maisonet, III time to read: 3 min
Basketball The Night Rodrigue Beaubois Was a Hall of Famer 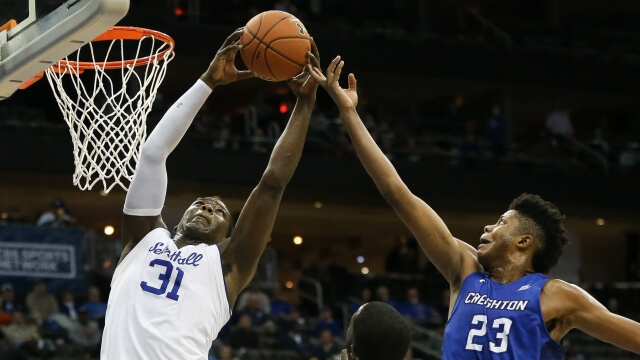