Well, the 2021 draft is finally over and with it, the NFL off.season slowly draws to a close. Soon, we’ll be hearing about how amazing everybody looks in camp, how “special” all the coaches think their proteges can be, and grieve at our fantasy team’s misfortune each time a season-ending injury happens during practice. So while we wait for next season, let’s look at the worst picks that were selected in the first round of the draft. After all, whiffing on a high draft choice usually spells doom for the franchise in question, and only time will tell if these 5 teams are visionaries... or fools

The Green Bay Packers select with the 29th overall pick :

So the sports talk shows are waiting for more mini-camp to start, and have to fill their on-air minutes by acting like professional sports are “soap operas for men” (and they are). This means every time they reference Aaron Rodgers and his current contract debacle, the conversation is full of “jilted lovers” and “scorned exes”. Get a grip guys, fan yourselves a bit... maybe go powder your nose and faint.

Here’s the situation: Rodgers is good. His team is good. He wants to leave because Green Bay’s weather sucks, he’s been there for over a decade, and they’re a small-market team despite their media presence... which means there’s not a ton of incentive for the NFL to let Rodgers win another Super Bowl if he sticks in his current city. The bottom line is that he’s a cranky diva who thinks he’s smart because he can read jeopardy cards, and this is coming from one of his fans.

Of course, the people who have to deal with him the most (the Green Bay front office) selected a cornerback in the first round, instead of giving the offense and their QB some help... They obviously needed another corner after Kevin King got humiliated during the NFC Championship Game, but this beyond stupid because it’s an obvious “screw you” to Rodgers, and creates a tiresome, emotional narrative. Just keep your difficult, talented star happy and take pass catchers until he retires in a few years. That way you’ll at least stay in contention until then, and could even develop Jordan Love the way they dreamed. This whole situation exists because they’re “looking to the future”... so walk the walk and spare the world another Bart Starr/Brett Favre situation.

The Dallas Cowboys select with the 12th overall pick:

Poor Dallas... They thought they had their corner and then poof! The two guys they liked just up and left the building. We all know what happened then: with nowhere to go and a brain-fart on the horizon, the Cowboys traded a few picks back (and Philly sends their regards) to select a super athletic defender with character issues and little game-tape to study. Sure he might become one of the best that’s ever played the position... but that’s true of every first round selection (or at least in theory). The downside of this pick is that Dallas already had a solid linebacking corps, and didn’t address the cornerback or edge rusher position, which are evident holes in the team’s current roster.

This is such a typical Cowboy pick, and foretells another 9-7 season for a squad who will have to contend with their star QB Dak Prescott coming back from injury (and re-adapting to the speed of the game after a long time off) as well as bring a historically bad defense back to a competitive level. I know Jerry Jones went all in on defense in this draft, but that doesn’t mean these picks will translate into on-field production, judging by the past player evaluations and selections that this front office has made in previous years.

The Las Vegas Raiders select with the 17th overall pick:

Tell me where you’ve heard this before: the Raiders blow their first round pick on a crazy reach. Oh that’s right, it’s every year. Maybe it would be easier to trust these types of decisions, if they yielded better results. Like if the 49ers or Bucs take a swing at a high ceiling, developmental project of a player, their winning cultures and history of success will buy them more good will than what LAs Vegas can expect.

The latest surprise to come out of the Black Hole is Alex Leatherwood, who is projected to be a solid blocker with enough length to be able to deal with defenders in the running lanes. And don’t get me wrong, he has the tools to fill a' void at right tackle, but the reason Leatherwood wasn't expected to be chosen before the second round at earliest, is because Virginia Tech's Christian Darrisaw and Oklahoma State's Teven Jenkins, were ranked higher by many analysts.

This feels like the kind of pick you’d make if you were scared of making a mistake and wanted a sure, dependable thing... which makes sense, considering Jon Gruden is operating on a decade-long timetable due to his monstrous contract, and obviously is playing the long game with his draft and selection strategies. We’ll see in a few years if being this risk-averse and conservative pays off.

The New York Giants select with the 20th overall pick:

DeVonta Smith went to the Eagles when they leapfrogged New York in a surprising trade with their arch-rival, Dallas. Smith would have been a tailor-made weapon for Daniel Jones in his field-stretching offense (not to mention a fitting complement to Kenny Golladay) but the Heisman Trophy winner went to Philadelphia No. 10 overall. The Giants then did the unthinkable and traded back, before eventually settling on Toney, a shifty receiver who knows haw to exploit mismatches in space, and play larger than his 6-foot frame would suggest.

It's not quite clear how much Kadarius will be able to aid Daniel Jones however, considering his route-running and contested-catch ability aren't anywhere near NFL-ready, at least for the moment. Big Blue’s Dave Gettleman even decided to pass over more polished players to select Toney, which means he’ll have to contribute immediately to not be seen as a reach (or even worse, a bust)... which is almost impossible for first-year receivers

The Jacksonville Jaguars select with the 25th overall pick: 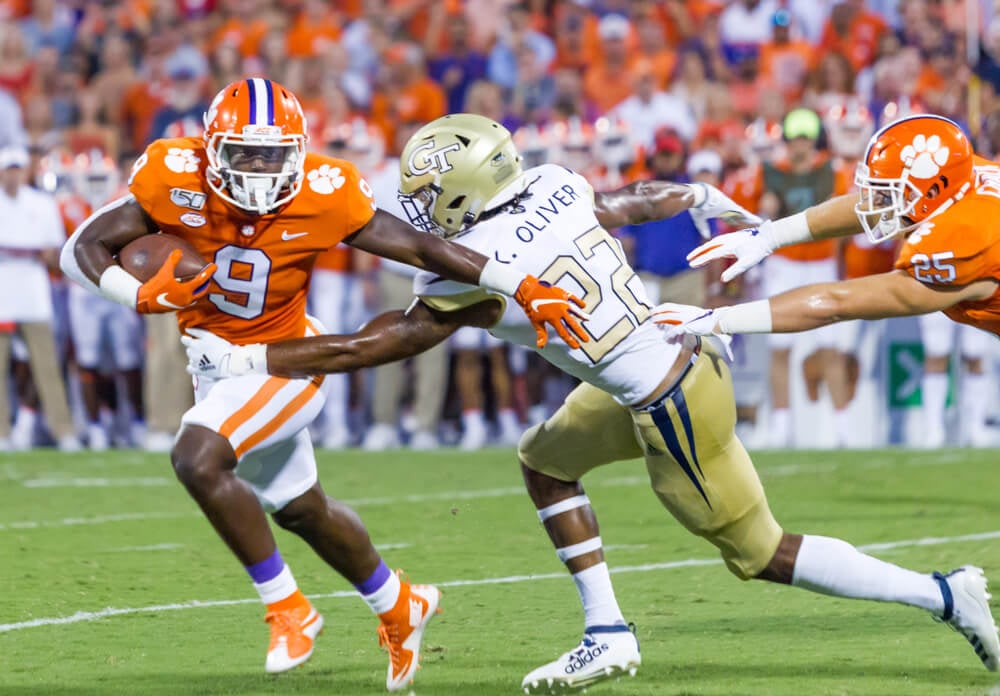 Travis Etienne, Running Back from Clemson

I get why the Jaguars would want to pair up their quarterback Trevor Lawrence with his former teammate, but this feels like a something Jacksonville got a little too cute with. They’re in the middle of a rebuild and need the best talent available.

Plus, Robinson was a revelation for the Jaguars as an undrafted free agent last season, and was expected up until recently to be a solid option to build around. It’s obvious that Etienne is more explosive as both a runner and receiver, and is an immediate upgrade... but why not upgrade a bad player? Robinson is talented enough to start.

Let’s not forget that in 2021, it's hard for a first-round running back, no matter how gifted, to justify such a lofty draft position, because runners have been devalued at the NFL level to increase “shootouts”. So yeah, this was all about Lawrence’s comfort level: Same college coach, same college backfield... I guess it’s Trevor’s world, and we’re all just living in it.