We take a look at who’s going to be drafted in the first round of the 2021 NFL Draft.

With the 2021 NFL Draft fast approaching, we thought it would be a good idea to take a look at some of the best college prospects available for all NFL franchises.

With the recent trading of picks between Miami, San Francisco and Philadelphia, the order of picks is now looking slightly different, with drafting needs becoming more apparent.

This first pick is a no brainer. Whatever happens in the Draft, Trevor Lawrence will be the number 1 overall pick of the 2021 NFL Draft. Lawrence is a face of the franchise QB, and one with a tremendous amount of ability.

Whether the Jets stick with Sam Darnold or not is still very much in the air. If they’re looking to rebuild, Zach Wilson can be the QB for them. Wilson has a high level of athleticism that is very much part of the modern day QB.

The 49ers’ recent acquisition of the number 3 overall pick from Miami gives us a clear sign that the 49ers intend to sign a QB. With Trevor Lawrence obviously going one, this pick will be dependent on the Jets’ decision. Garoppolo may be the starting QB for San Francisco, but may not be at the end of the season.

With the Falcons opting for Arthur Smith as their new head coach, it feels like they’re willing to give Matt Ryan the benefit of the doubt and stick with their QB. Smith was able to turn around Ryan Tannehill’s career in Tennessee, so may look to do the same with Ryan in Atlanta. Therefore, protection is needed, and Penei Sewell is arguably the best lineman in the Draft.

Protecting Joe Burrow must be a high priority in the Bengals camp. With Rashawn Slater projected to be one of the best lineman available in the Draft, the Bengals could benefit massively from his versatility and strength. We’ve seen him matchup with Chase Young during his college days, and he kept the 2020 NFL Defensive Rookie of the Year at bay.

Already in the state of Florida, Pitts is described as “a QB’s best friend. Considered one of the best catchers in the Draft, Pitts would be a major weapon for Tua Tagovailoa and the Dolphins’ offense. With him and Mike Gesicki as the Fins’ tight end depth, they would strengthen their offense even more in order for Tua to succeed.

With Kenny Golladay leaving for New York, the Lions’ offense needs a playmaker or two in the receiver corps for new starting QB Jared Goff to throw to. Smith has shone in Alabama, making him one of, if not the best, wide receivers available in the draft. His ability to play both wide and in the slot would make him a great addition to the Lions.

Still unsure whether Teddy Bridgewater is the future Panthers QB, Carolina could opt for the Trey Lance as their first-round pick. His strongarm and athletic ability makes him a great offensive weapon. Combine that with a (hopefully) fully-fit Christian McCaffrey, and the Panthers offense would all of a sudden be a very strong outfit.

Denver’s problems lie within their lack of defensive talent. Offensively, (minus Drew Lock) the Broncos have enough options to score points, but the defense lets them down. With them keeping Justin Simmons at safety, as well as gaining a corner, the Broncos should look to arguably the best defensive player in the Draft class in Micah Parsons.

With Dak Prescott on a new deal to keep him as starting QB, the Cowboys’ offense is at ease. However, similarly to the Broncos, the lack of elite talent, especially in the secondary, is a problem for the Cowboys. Surtain is the best corner in the Draft, with some great coverage and 1v1 abilities, making him a very valuable addition to Dallas’ defense.

The first week of free agency saw Dave Gettleman and the Giants solve a lot of their problems with talent from across the league. The addition of Kenny Golladay, John Ross, Kyle Rudolph and Adoree’ Jackson sorts out a lot of the Giants’ issues following a disappointing 2020 season. Now, the main aim is to protect Daniel Jones. The best lineman available at this point is Darrisaw, who is strong at tackle.

After moving on from Doug Pederson and Carson Wentz, the Eagles find themselves left with Jalen Hurts as their starting QB. He needs offensive options, especially with their tight salary cap space. Chase is a standout receiver in the Draft, and will add a passing option for defences to deal with as well as Zach Ertz & Dallas Goedert.

With an impressive 2020 season, Justin Herbert has shown he is a QB that the Chargers will want to hold onto. Giving him a passing option in Jaylen Waddle will benefit the Chargers’ offense in a major way. With Waddle, Keenan Allen and Mike Williams, Herbert would have some very strong options.

There are a number of areas on both sides of the ball that Minnesota will look to improve with their Draft picks. With that said, the presence of Kwity Paye on the Vikings’ defensive line will be a huge help to their existing options. Paye is a top-class lineman that can bring the pressure to QB’s, something the Vikings haven’t been able to do successfully in a few seasons now.

Bill Belichick will like the attributes that Oweh has, with his strong build bringing pressure off the edge. With a flurry of free agency signings, the Patriots have built their offense around Cam Newton, and now need to fill the gaps on their defense. Oweh is definitely an edge rusher that they need.

Farley is a playmaker in the secondary and will be a huge benefit to the Cardinals’ defense. With the addition of JJ Watt now part of that defense, as well as an offense filled with multiple stars, a corner with Farley’s talent may bring Arizona closer to the playoffs – especially in a highly-competitive NFC West.

A very strong linebacker to have in the box, Ojulari would benefit the Raiders’ defensive massively against the run game – something they have struggled with in past seasons. Ojulari is also a very versatile athlete, with an ability to rush the passer as well as his coverage skills.

The Dolphins are wanting to give Tua all of the weapons needed at his disposal to succeed in Miami. Harris is an explosive starting running back that Miami arguably hasn’t had since Jay Ajayi. Harris will be the first running back to be selected in the Draft, whether he’s selected by Miami or not, but he would be a good fit in Miami.

Still a gap in their defense, despite playing well last year. With Chase Young, and the addition of William Jackson III at corner, only void is LB. Owusu-Koramoah is a first-round projected pick, and his defensive skills show exactly why. He would strengthen Washington’s defense even further.

With the QB fiasco that’s currently happening in Chicago, there’s a good chance that the Bears will want to sure up their QB position for the future. Jones is a good QB in the pocket, and has shown in Alabama that with some athletic playmakers, he has the potential to be a franchise QB.

Vera-Tucker being able to play tackle and guard is just one example of how versatile the lineman is. With Carson Wentz being introduced, one of the priorities will be to protect the pocket to get the best out of the QB. Vera-Tucker is a very athletic QB that can fit that role perfectly.

Losing both Corey Davis and Jonnu Smith leaves the Titans with only one or two playmakers in their receiver corps. Rondale Moore would be a very beneficial Draft pick from Tennessee who can fill that void immediately, with a prospect that is very quick in the slot – and can benefit the Titans’ special teams as a return specialist.

Acquiring the 23rd pick from Seattle – as part of the Jamal Adams trade – the Jets have the chance to add another offensive option to solve one more of their many problem areas. Etienne is very much a speed back, so if he has open field, he will outpace almost everyone.

Rousseau is a very athletic pass rusher that makes any offensive tackle’s life difficult. Coming off the edge, he has the ability to put immense pressure on any QB, and with the Steelers losing Bud Dupree, they could look to replace an edge rusher. If Rousseau and TJ Watt play together in Pittsburgh, that’s a scary prospect for a lot of QBs across the league.

It’s clear that Trevor Lawrence will be a Jacksonville Jaguar at the start of the 2021 NFL season, and will want playmakers to help with the Jags’ offense. Bateman is a quick, powerful receiver that can be utilised in both the slot and as an outside guy. His speed will beat a number of DB’s in the league, making him a valuable option for Lawrence.

The Browns had an impressive 2020 season, making the divisional round of the playoffs. With a lot of offensive options, it’s the secondary that needs addressing. Moehrig is considered one of the best safeties in the 2021 Draft class, so could be a good option for Cleveland.

Phillips is a very good asset to have for a run defense, with his athleticism allowing a quick and powerful get off at the line of scrimmage. The Ravens lost Matt Judon in free agency, and Phillips could be an ideal replacement for Baltimore.

With the Saints clearly committed to having Jameis Winston following Drew Brees’ retirement, the New Orleans offense is still a solid unit. Tyson Campbell has good coverage and ball skills, and could be a long-term replacement for Marshon Lattimore - who is a free agent after the season.

Protecting Aaron Rodgers will be key to the Packers’ season, and for the rest of the QB’s career. Mayfield is a big-bodied strong lineman that can resist pressure from pass rushers. Towards the end of the first round, this is still a nice opportunity for Green Bay to sure up their protection up-front.

Zack Moss & Devin Singletary are good players to have in the backfield, but are they starters? Javonte Williams definitely could be a star running back in his career, so building an early relationship with Josh Allen could be key for the Bills’ future offense. Williams is also a good pass blocker, which will benefit Allen and the Bills’ passing game.

With the Chiefs releasing Eric Fisher and Mitchell Schwartz after their Super Bowl loss, a replacement offensive lineman will be a priority to protect Patrick Mahomes – the best player in the league. Teven Jenkins is a strong tackle that can play either side of the center, meaning he could be a huge asset for the Chiefs.

The Super Bowl LV winners were happy to hear that Brady and Co. were extending their Tampa Bay careers by another season, which allows the Bucs to focus on the defensive side of the ball for the upcoming season. Zaven Collins is a very athletic linebacker to have in the box, but can also play well in coverage. 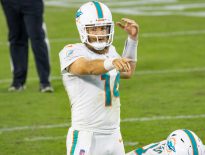 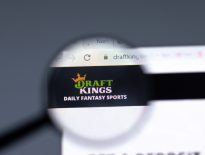