We’re merely at the beginning of the long NFL off-season, with that in  mind, and, well, just because we love sports, Daniel has decided to bring you his top 5 sports-based movies. If you love your sports and have an evening to spare, then sit back, grab a beer and get the snacks read before you get tucked into these bad boys…

When World War 2 rolls around and sends all the men off to shoot at each other, those left behind still need some distractions from the constant pressure of global conflict. For America, this meant Madonna and a gang of burly chicks start playing baseball at Yankee Stadium. At first, nobody watches or believes in them and they suck, but then they get good and Tom Hanks gets all whimsical as a drunk, sh*tty coach who messed up his career with booze. Good to watch once, forget about, then watch again a few years later – then be pleasantly surprized

Woody Harrelson and Wesley Snipes… Damn, just saying their names makes me want to pop this one in again and give it a watch. It’s an awesome tale about two streetballing con-men, who team up to win it big and keep their dreams alive. Driven by the kick-ass mojo and on-screen chemistry that the pair provide, the movie screams by in a neon rush of trick-shots, buzzer beaters and daring gambles. The actors practiced tirelessly to do their own action sequences, so when you see the duo dribbling up and down the court, there’s no silver screen magic. For those who lived the 80’s, it’s a nostalgia time-bomb… and for those who didn’t, it’s like jumping into a really weird time machine. Either way, when the credits finally start rolling, you’re going to feel quite an urge to play some 1 on 1 with your buddy

3) Any Given Sunday (Football):

You don’t even have to try anymore. Just close your eyes, think of Pacino and you can hear him say “LIFE! … is a game of inches” That speech at the end, to motivate his team before the big game, contains some of the most iconic lines that the actor has even spoken, and still ring true to this day. Plus, with an ensemble cast of Dennis Quaid and a young Jamie Fox, there’s plenty of talent and intrigue to really feel the sweat, blood and tears fly off the screen. Considered by many to be among Oliver Stone’s most flawed, yet beloved films, it can still hold it’s own against more recent sports-centered movies… and always merits a re-watch when the playoffs come around

A close runner-up for the “Best Sports Movie” on our list, this Kurt Russell classic is easily one of the most memorable hockey stories ever told. It recreates in great detail the days and weeks leading up to the 1980 olympic men’s hockey finals. Seemingly doomed to lose against the all-powerful soviet squad, Kurt’s plucky band of college kids take on the U.S.S.R.’s most fearsome skaters and go the distance, in an epic tale of grit, patriotism and determination. “Miracle” would have taken the top spot, but after re-watching the Russians win olympic basketball gold over the U.S. in 1972 (Youtube the refs rewind the finals seconds again and again until Russia wins, it’s worth it) it became apparent that politics interfere too often with sports… and most probably had something to do with this incredible american victory

The untouchable masterpiece of sports cinema will forever remain the iconic tale of a Philly boxer who wouldn’t back down. Written by Stallone in under a week, it went on to win 3 Oscars by telling the story of a lousy boxer who never took the sport seriously… until the world heavyweight champion (Carl Weathers, in all his mustachioed glory) needs a human punching-bag for an exhibition match at Madison Square Garden, to build hype for his next title bout. Despite being told to drop in the 2nd round, Rocky quietly trains like a madman up until that fateful date, so that when fight-day comes, he can stand up to the world champion. Yes Rocky gets beat half to death, but that’s his style: no matter how hard you hit him, he never stops swinging back. Blind, bloody, deaf and concussed, he still floors Apollo Creed a few times and almost knocks him out. Most people forget that Rocky doesn’t win the fight at the end, he loses by a landslide because Creed landed more blows. But the point is, a poor goof from nowhere took the champ to his absolute limit, and the whole world saw it!

The 5 Best Movies About Sports 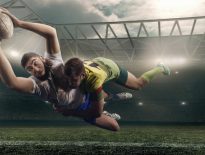 Homepage Rugby: Why This Sport Can Be Your NFL Fix 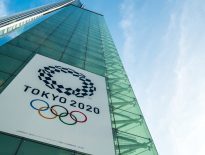 Homepage WTF is Going On with the Olympics?
0