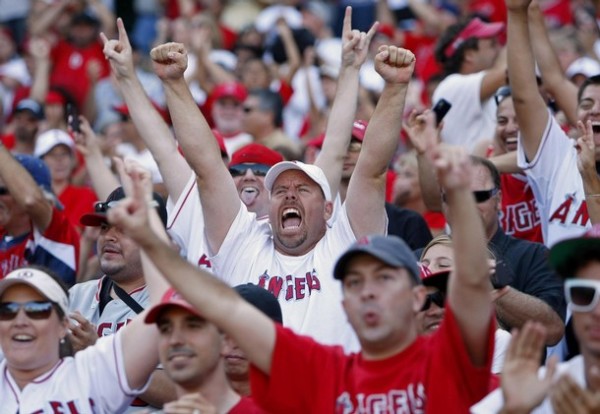 In the vein of the New Year's resolution, here are some things to keep in mind this next sports year.

Being a fan can be a tricky proposition. After hours upon days upon years of watching the games, we can start to fall into some ruts. Hopefully, some of these tips will vibe with a few of you and make you think a bit extra in the next year. With a few tweaks, we can all enjoy our fan experience a bit more.

In fact, our improvement can change the actions of those fans around us. After all, we're the top of the food chain. If you're here and reading this, chances are good you are a top fan. A fan who has been around the block a few times and knows who Spud Webb was. A fan who remembers the dark ages when the NFL was played on NBC.

These fans - whether they know it or not - set the tone for the rest of fanhood. So in 2013, let's make a resolution to improve the fans.

In labor disputes, taking sides is fruitless – and often narrow-minded.

It’s easy to single out the players as the side of the fans. After all, the big and bad billionaires who own the teams aren't empathetic figures. However, there are two sides to every coin.

In the NHL now, both sides are teetering closer to equal blame. The fact there is no hockey is a reflection of the unwillingness of both sides. Fans should be able to see the issue as a whole if they hope to understand it.

This has been touched on before, but fans who blame officials for everything are at the bottom of the barrel. Finger-pointing and whining isn’t appreciated in life, and it shouldn’t be appreciated or acknowledged in fanhood. You’d be surprised at how quickly the ripple effect of the blame game expands.

Rise above that influence and acknowledge that no game is won or lost on one play alone.

Old schoolers and sabermetricians both need to grow up.

There is a place for sabermetrics in today’s athletic evaluations. There is also a place for the traditional statistics.

There is no place for the hardcore advocates of both sides who argue incessantly. The reason the other side refuses to act like adult human beings is because they egg each other on in a battle royale of nerdom. When the leaders of both sides and those who believe in both treat each other with respect, we’ll see less animosity. With that, we’ll see more acceptance and better evaluations in terms of who deserves the highest praise in sports.

Be hesitant when the unproven bandwagon rolls around.

It’s okay to be excited about new and shiny things. Ask Santa Claus. However, we must remember that success is earned, not given.

Too often, we reach with our appraisal of teams we want to be good, or teams who haven’t been good in a long time. For instance, USC was thought to be the top team in the country before the college football season started. Why? They have a coach who hadn’t won anything. The SEC had won multiple titles in a row. Why would we assume USC is a powerhouse?

In NCAA sports, the abolition of preseason polls would help. That will never happen because the ratings machine is far too big.

Just remember what Public Enemy so eloquently stated the next time a team is having praise heaped all over it. Don’t believe the hype.

Try to evaluate the means … not just the ends.

It’s easy for us to see a player fight through injury on Sunday when it’s right before our eyes. We think of men as heroes when they go the extra yard in excruciating pain.

While our idealistic representation of sports if comforting, it’s good to keep things in  perspective. The usage of painkillers and cortisone shots is prevalent in professional sports. Also, the player who needs to play might be in a contract year. While you see a player fighting for his team, he might be put at risk by his team. Or in the case of the contract, he might be fighting for his payday.

Remember that sports are business. There are many contributing factors that go into a team, a game and a season.

What you see on game day is just the final product. Think about how it got there. It’s important to see beyond what is presented to see what truly is.

Don’t be afraid to take a step back from sports

As diehards, it’s tough to peel away from the box scores. If you’re anything like myself, you know little else beyond sports. It's a lifestyle. It’s rewarding and interesting. There is always change and news.

However, sometimes it’s good to shut off the television for a week. Sometimes, we must disconnect from the games and then come back.

It’s always good to come back with a clean slate. Our clear mindset towards sports can refresh us. Never be afraid to take time away from sports (or most anything) and enjoy some of life’s other finer things.

Of course, you still have to read The Sports Fan Journal.