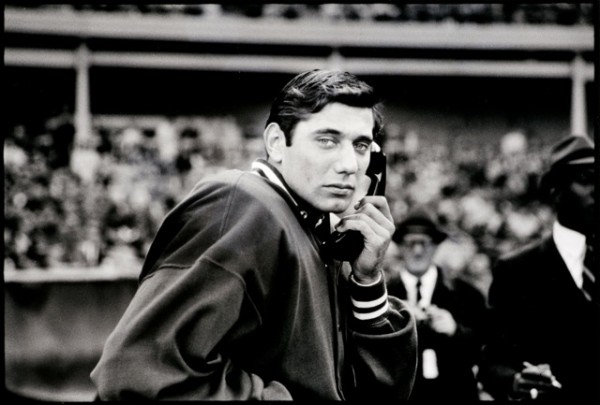 Last week, Kenny reviewed the recently released Michael Vick biography “Finally Free.” A player who became THE cultural touchstone in the United States because of his involvement in a dog fighting ring, Vick has tantalized and frustrated football fans since arriving on the NFL scene in 2001 for his play and demeanor. Cynics who may never glance at the book might see it as a continued scripted mea culpa for his crimes, but the curiosity on how Vick tries to redeem himself still fascinates a good chunk of football fans across the nation.

“Finally Free” and similar biographies these days have been published not only as the athlete is still active, but in our Internet media and bigger cable package era. Where much of what players did away from the field or ice used to wait to see the light of day, now a comprehensive book on an active player while every stone about him or her is being turned over by Twitter and gossip sites is the norm. It has to be one of the strangest paradoxes in sports.

For years, I’ve always made a point to read about those who came before us, the men and women who helped shape the games for better or worse. Within the last eight years, I have read about or owned books to be read on Jack Johnson, Oscar Robertson, Fritz Pollard, Johnny Unitas, Pete Rozelle, Willie Mays, Sugar Ray Robinson, Curt Flood, Roberto Clemente, Jackie Robinson, Walter Payton, Barry Bonds and I currently have my nose in Mark Kriegel’s account on Joe Namath*. Depending on whom is writing the story, some matters can be delved into heavily through access to friends such as the heavily researched “Sweetness” by Jeff Pearlman or feel curiously unfinished such as the autobiographies on Oscar Robertson and Jackie Robinson.

[This list does not include recollections on teams such as Jack McCallum’s entertaining book on the Dream Team, themes such as Ron Thomas’ They Cleared the Lane or harrowing post-event reads as John Feinstein’s The Punch.]

In those tomes, regardless of who is the author or the subject, there’s a sense of time travel as you read about their lives. You get to walk with them to experience the trials and tribulations. You may try to comprehend the physical pains that guys like Namath, Payton and other football players endured. You may catalog the social travails that Pollard, Robinson, Flood and Clemente attempted to overcome. Even those with a mind for business can consider the brilliance of someone like Rozelle in depth.

Those were sports figures of earlier eras that boxed, shot, ran, tossed, hit and most importantly thought their ways to become icons against varied levels of adversity — with some fighting such battles in the public eye. These biographies and autobiographies typically came from the fact that even for those who lived during their heydays, there was so much hidden from the public, addressed in piecemeal or unexplored entirely.

The larger retrospectives were waiting to be told because the public didn’t have the real-time immediacy that we have today.

Considering how those legends were crystallized in the media during their time, it’s hard not to wonder what will happen when someone like LeBron James makes his last shot, the Williams sisters tire of ruling the tennis world or Derek Jeter has the final curtain call. If we believe the never-ending news cycle, our modern sports figures – athletes, coaches, executives, commissioners – have their legacies on the line with each passing game. One contest determines how they will be spoken and written about forever thanks to the media landscape that includes social media, sport-specific cable channels and even your friendly neighborhood Journals.

Whether carefully crafted with the subject’s approval or salaciously dredged up by an enterprising journalist, the biography serves as the record of a sports figure, and it’s always our hope that it provides some color to his or her career with anecdotes about life off the field.

Yet, when our modern athletes have their stories told, will we have been spoiled by what our media gives us now? Or is there still a chance that they have held something back for us to learn when it’s all said and done?