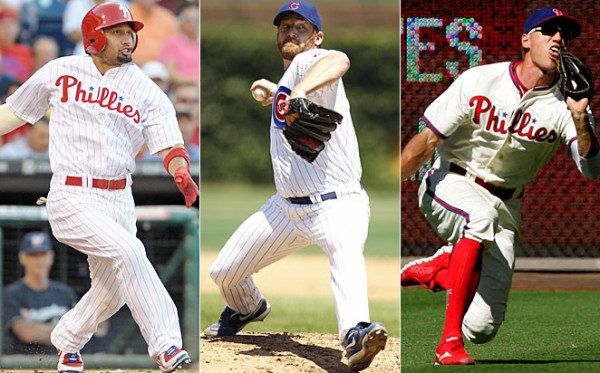 Baseball is cut from a different cloth from other sports.

The fields are different dimensions. One league plays by a different set of rules than another. An exhibition game in the middle of the season determines home-field advantage in the World Series.

These examples and more make baseball completely different. Baseball fans love the unique nature of the game. In fact, they embrace "pastime" as a description rather than "game" or "sport."

Aside from the differences in the way the pastime is set up, there might be no greater difference than the art of the trade.

In football, a trade is rarely made during the season. There's simply too much terminology for a newcomer to absorb. The understanding between teammates must be made through training camp, preseason and practices.

If you need a player in the middle of the NFL season, your best bet is to hope a backup can do the job.

On the ice, trades happen more frequently. A player can drift from team to team. Still, the player must understand the system. He must fit a certain requirement from that coach. Goalies can move without as much fuss, but teams tend to hold on to them due to the short shelf life of a first-string netminder.

The NBA moves around crazy buyouts and if a player can fit the chemistry of the team. On the court, the players move along like jazz (not the Utah variety). They must be in spot A at time X. They need to screen player Y and then drift to spot B. A three-point specialist or a defensively strong player usually can be had for the right price.

In baseball, these worries are forgotten.

It's an individual's game played as a team. A shortstop will move from Arizona to Boston. He'll be required to field ground balls the way he's done all his life. When the ball is hit up the middle, he'll get there and turn a double play like he did in Arizona.

At bat, he'll battle the pitcher one-on-one. His practices consist of taking ground balls and hitting pitches. In addition, the team who trades for the player will have a complete book on his tendencies.

Baseball people are stat fanatics. They know exactly when a player will struggle and when he'll thrive. They know the exact pitch count when a starting ace will lose two miles per hour on his fastball.

Franchises know what they're getting.

A trade will be made for an aging veteran who can't play first base so well anymore. An American League team will trade for the vet and know that he can hit right-handed pitchers as a designated hitter. Once the trade is consummated, he'll sit on the pine until a righty takes the mound. Then, he'll swing for the fences, as the team needs him as a power bat.

The funny thing about a baseball trade is the unknowns of the deal. Few keep track of the two low-Class A pitchers that were sent along with cash considerations. Some don't even know who the affiliate is in the low-Class A.

Cash considerations? No one ever finds out what they were. But, when a designated hitter comes to the plate and hits two home runs in a pennant chase, what a great deal the franchise made!

Some teams even have to eat cash for a player they send the other way. What a fantastic idea that sounds like. It's always funny to picture a general manager sitting at a desk on the phone at the 11th hour.

"Yes, we know you want that player, and we want that scrawny second baseman you have playing in Toledo," he'd say. "How about this? We'll pay all but $500,000 of his salary and you guys can just have him. Keep the change."

Players are traded during games in some cases. That leads to the obligatory footage of the player hugging his teammates. He looks like a great friend. In reality, he might just be overjoyed to leave Kansas City and head to Atlanta.

At that point, he'd hug anybody in his vicinity.

Maybe one day, the entire universe will operate like Major League Baseball. Maybe your boss will walk in and tell you that you've been traded to a company that might just be tops in its field by the end of the year.

The new company is happy to have you. They made sure you came to work for them.

That would be enjoyable enough to make you hug the guy in the cubicle next to you who eats tuna fish for lunch and relays reddit links to you through email.

Baseball doesn't always go by the same rules as the universe or other sports. But it sure makes for a fun trade deadline.

3 Replies to “Wheelin' And Dealin' In The MLB”