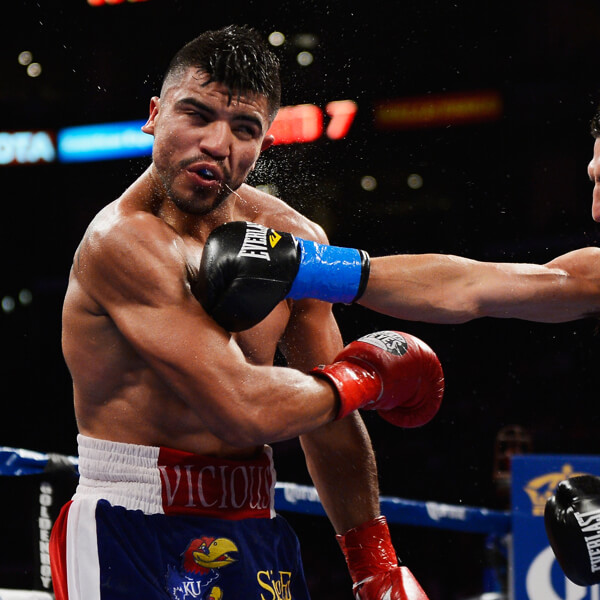 Victor Ortiz returns to the ring Jan. 30 on Fox Sports 1. Joining him in the ring will be Luis Collazo and Ortiz’s own distorted perception of the fight game. Since his flirtations with Hollywood — on Dancing With the Stars and more recently in The Expendables 3 — it seems that Ortiz has become convinced that he’s the greatest fighter alive at 147 and 154 lbs. Tinsel town has warped Ortiz’s sense of reality.

In recent interviews, when asked about his hiatus from boxing and what he’s liked about the fights since he’s been gone, Ortiz brashly admitted that he hasn't watched much boxing because he'd often turn off the television in disgust at the small bit of the performances he saw. Ortiz added that he’d destroy the guys who were winning welterweight titles nowadays. Listening to Ortiz's prattle prompts a very simple question: When exactly did Ortiz earn the credentials to talk so much shit?

Maybe it was from back in 2009. Back then some thought Ortiz as the heir apparent to the Golden Boy, Oscar De La Hoya. At the time, Ortiz was an undefeated Mexican American with the good looks to bring in female fight fans, just like De La Hoya. Then Ortiz ran into Marcos Maidana's right hand. Maidana was brought out from Argentina as a hard-punching test for Ortiz but one defensively flawed enough to help Ortiz earn another entertaining knockout. Maidana didn't stick to the script. Instead, he sent Ortiz down to the canvass three times in one of the most entertaining fights that year. The brawl came to an end after each fighter had gone down three times, when Ortiz lost his poise and quit in the middle of the round by waving off the referee.

Maybe Ortiz thinks he earned the large chip on his shoulder after his marquee victory over Andre Berto. He put on a hell of show that night in 2011 and rightfully entered into fight-of-the-year conversations. In hindsight, however, the full measure of this victory has to be taken against the backdrop of the draw that Ortiz earned against Lamont Peterson in the fight before the Berto victory. Peterson, although a hard-working, extremely affable and talented fighter, has shown time and again his inability to make it to the top. Seen side by side, the draw against Peterson makes the Berto win seem more like a lucky night instead of proof of greatness.

Ortiz’s next fight helped show exactly where Ortiz stood in the welterweight division. After Berto, Ortiz stepped in to what he has called on multiple occasions "elite-level" boxing, namely into a ring with Floyd Mayweather. Against Mayweather, Ortiz once again lost his composure, this time in an even more shocking manner than in the Maidana fight. Only three rounds into the fight, Ortiz had hit little more than air. Then in a fourth-round flurry that got him excited and frustrated, Ortiz punctuated a barrage of punches with a head butt, bloodying Mayweather by driving his teeth through his lip. We all know what happened after that.

So after considering that performance against boxing’s elite, I'm still left scratching my head, wondering: Where is it that Ortiz proved his greatness?

Only one fight removed from the Mayweather debacle, Ortiz came in against a fighter whom everyone expected to be a soft touch, Josesito Lopez — a junior-welterweight coming up in weight for the biggest payday of his career. Despite the immense heart Lopez showed before and after this fight, no one would expect to see him in the same stratosphere as Mayweather. He was clearly there to pad Ortiz’s record on the way to a much talked-about fight against Canelo Alvarez.

Lopez, however, delivered the performance of a lifetime, living up to the name, “Riverside Rocky,” as he out-hustled and out-banged Ortiz. The fight ended in Ortiz’s corner, with Ortiz refusing to come out for the ninth round due to the broken jaw Lopez had given him. Unless Ortiz has some masochistic or distorted perception, that fight certainly can't be the basis for him believing that he's much better than everyone else today at welterweight, much less junior middleweight.

Now, a year and a half later, he's got Luis Collazo in front him, who at one time was a slick southpaw. Today, Collazo is just a seasoned southpaw with some miles on him. But that doesn’t make him a pushover. Back in 2009, he gave Andre Berto his toughest test to date. Since then, Collazo has gone 5-1 against middling opposition. How Ortiz performs against Collazo will show how far he's got to go to once again reach elite-level boxing and, probably, whether it's still even possible for him. With Ortiz’s background, his newfound braggadocio, and Collazo’s grit and everything-to-win position, I think fight fans are in for a treat.

One Reply to “Victor Ortiz: Dreaming Of Greatness”