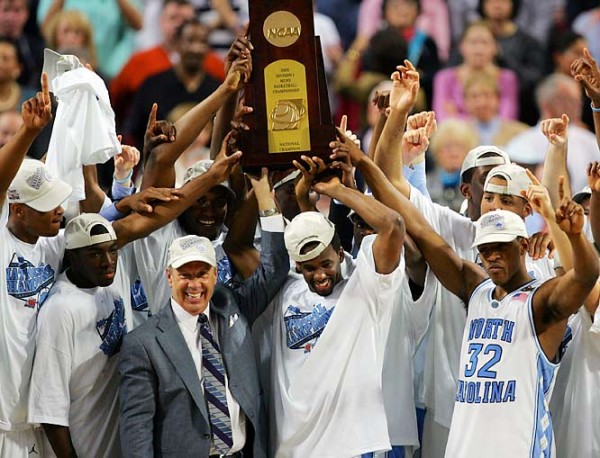 This weekend as I continued to "Shock The World," I made it a point to attend a UNC Tar Heels men's basketball game. My daughter and I had good seats in the fourth row, and we sat there with our popcorn and lemonade observing the Heels beat the brakes off of East Tennesee State. That victory was no surprise, but I did notice something about the team that let me realize why the Tar Heels will not win a national championship this year.

Throughout the arena there are banners. Unlike most arenas out there, the Dean E Smith Center doesn't have a ring of honor that gives credit to great players in the history of the school. At UNC, they do it different. At UNC, they hang the jerseys of their most important players in history so they will never be forgotten. It is truly an impressive sight as you observe, and as I continued to look at the names and the championships something became apparent to me, which led me to this post.

I was awakened to the fact that I might have the ability to recognize when the Tar Heels are going to be contenders for a national championship. The recipe for success is actually hanging in the rafters and is pretty simple when you think about it. They always seem to have a big guy who can make an impact, but the team is dependent on having a combination that has to work in the back court.

The recipe calls for a point guard to be a tone-setter and game-changer with the ability to make the opposing point guard miserable. He can do it in a variety of ways.

Carolina basketball is predicated throughout the years on the ability of the shooting guard. UNC has won five national championships. I can’t speak on the 1957 team because I wasn’t alive to see it, but the other four championship teams all had pretty good guard tandems.

Especially during the Dean Smith er,a the shooting guard was the key component to the success of the team. Dean really liked point guards who could handle the ball and get the ball to the shooters and the post players. Having talent is never an issue for the Tar Heels, as almost every player on the team is some sort of High School All-American or McDonald's All-American.

Dean Smith-coached teams were always solid, but he made sure he had a floor general. The 1982 team that won the national championship is remembered for having Michael Jordan, Sam Perkins and Big Game James Worthy. What most people don’t remember is that Jimmy Black was the glue that held that team together.

The 1993 team that won it all for the Tar Heels was led by Donald Williams, George Lynch and Eric Montross. However, the catalyst for that team was a feisty Derrick Phelps, who made sure he could create for his teammates.

The Dean Smith formula was solid. Even though he had moments when he seemed to have more talent than anyone else on the floor, he never really won unless he had that one guy on the floor who was a general. He demanded that guy who the rest of the team was going to follow. 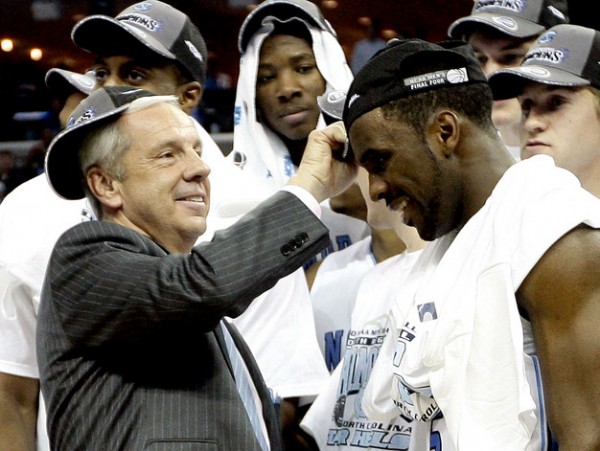 Roy Williams has had similar success, but Williams-coached teams depend on a point guard who can dominate the game. Roy doesn’t champion himself on half-court sets and backdoor cuts from running the FLOW offense or the FLEX offense. Roy does it differently. Roy likes to out run his opponents.

The only problem with the Roy Williams formula is he has to have the best point guard on the floor for this to work. Many times, that isn’t going to happen. But so far the formula has netted the Tar Heels two national championships under Williams.

In 2005, Roy inherited a solid team that had all the pieces to win right away. Sean May, Rashad McCants and Raymond Felton were big pieces to the championship puzzle. The team was solid, and there weren’t many point guards in the country that could do what Raymond Felton could do. He was quick, nimble and had the ability to use his power to finish on most point guards in the country. In fact, unless he was playing Wake Forest or Illinois that year, Felton was going to be the most dynamic point guard on the floor.

In 2009, it was more of the same. The Tar Heels were stacked, but they were only going to go as far as Ty Lawson would take them. Sure they had other guys like Wayne Ellington and Tyler Hansbrough, but Lawson was the key component — he was so much quicker than anyone on the floor and when the game got close he had the ability to change the tempo to UNC’s favor.

The problem with Roy’s system is that he often has talent on the floor that is underutilized because of the style of play of his Heels.

When I look at the team this year, it is a hodgepodge of talent that will not be good against solid teams because they don’t have that point guard who can defend and wreak havoc. One of the reasons I didn’t think they could win with Kendall Marshall as a point guard was because he was too slow to do what Roy liked, but he found a way to get the ball out on the break so the team could be successful. He was just a liability on the defensive end for a team that doesn’t ever play any zone defense.

The guard position has always been a key component to the success of the Tar Heels, but now more than ever it is polarizing. If I am Roy Williams, I am making it a point to sure up the point guard position every year during recruiting. No way I let guys get away who can be difference-makers, especially when my system is totally dependent on it. Marcus Paige is a step in the right direction, but I am not sure he is going to be the best point guard on the floor many games this year or next year. But if he stays for his third year and he continues to improve, that is the year the Tar Heels make their move.