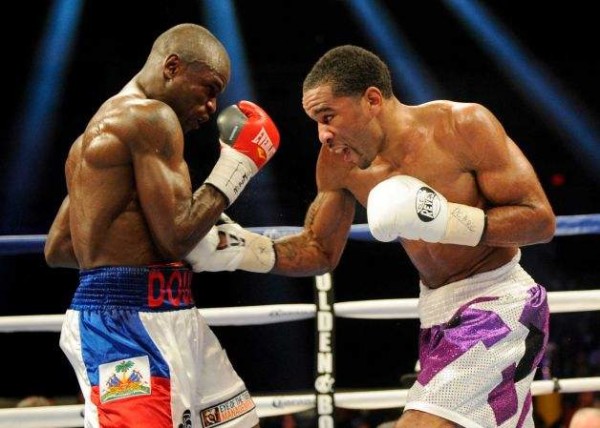 In the blustery cold, a sold-out crowd of 5,700 piled in the D.C. Armory in the nation’s capital to see hometown native Lamont Peterson box Dierry Jean.

The uglies and the pretties waltzed around the dark and dingy event center. The clean-shaven and the bearded looked for their seats. The women in dresses walked alongside the women in t-shirts. The men in suits and mink coats mingled with the men in sweatshirts and ball caps.

Peterson is no ordinary native son. He and his brother Anthony lived homeless in Washington, D.C. without parents. The success story written by a hand in a boxing glove does more than enough to endear Peterson to the home crowd. It galvanizes the connection.

In the first round, neither boxer did much of anything. They felt one another out in a standoff. At some point, someone would give way to the crowd, the night and the tension.

“Let’s go, Lamont!” one of the crowd goaded.

Aside from a small section of French Canadians who ventured to support their own hero, the crowd spoke to Peterson as if he were their child on a youth basketball court. They hollered to him from the top row and the ringside seats. Each voice could be heard distinctly over the white noise of chatter. Each voice held meaning, a plea for the knockout punch.

Both fighters warmed up in the second and third rounds. Jean landed the quick blows that his staunch 5-foot-7 frame allowed. Peterson’s long left hooks would connect here and there, exemplifying his rangy arms.

In the fourth round, Peterson demonstrated his power and the musty armory came alive. When the fifth rolled around, the reigning IBF Junior Welterweight Champion punished Jean with left after left after left. At 10:45 p.m., while most people were inside finding another blanket for bed, the crowd exploded.

The uglies stood. The pretties stood. They stood in dresses. They stood in t-shirts. Suits and minks unruffled alongside those standing in sweatshirts and ball caps. The hometown fans stood and inched closer to the ring. They shouted to Lamont. They instructed Lamont. They begged for Lamont to deliver the final blow, the one they could sense was on its way.

He danced and teased Jean, waving his arms around as if to make the Haitian-born fighter see quadruple instead of double. When the bell rang, all the out-of-towner could do was shake his head, as if to signify the round went exactly how he didn’t want it to go.

At 25-0 before Saturday’s bout, Jean was no pushover. However, few knew how he’d do outside of Canada. He didn’t have the skills that Peterson owned. After the bout, he’d acknowledge such.

“Just a matter of experience,” Jean said through a translator. “Life goes on, you know?”

For a moment, it wasn’t clear that it would for Jean. He was dizzied and the fans knew it. In the sixth, the chants began.

On and on they went. They grew louder and louder until Peterson finally rewarded them with four vicious left hooks to Jean along the ropes. The fight was over, right then and there. The final six rounds made no difference.

He spoke to the crowd’s pleasure with their native son.

“We’d like to see a knockout but a win is always good to see,” Gilly said. “Lamont always comes to fight.”

The repetition was necessary. Lamont Peterson did come to fight on Saturday, like he always does. Like he’s done the three other times Gilly’s seen him in his hometown.

As Gilly watched the ring, the crowds filed out of the building save for those taking pictures of Peterson as he walked towards the corridor. He stopped and said hello to his supporters.

The truest words were spoken by the 5-foot-9 fighter, but the meaning of them was in the solo calls of advice to the ring. It was in the combination of every type of D.C. citizen who didn’t hold a job on Capitol Hill.

For a night, it was still Peterson’s city, his damp and stale armory and his people that filled it.

One of his people summed up why boxing should still draw a crowd.

“I think it’s just the technical aspect of boxing,” Gilly said. “Outthinking and outworking the opponent.”

The fan had a point. Peterson had done both. He had twice the power-punch connection rate of Jean. He threw more punches in the fight and landed them at higher efficiency. The bout took place on Peterson’s terms. That’s how he retained his IBF belt and improved his record to 32-2-1.

Some say boxing is dying. Others believe it’s already dead. Those pundits didn’t see the smothering crowd of every type of person as they stood and sent their energy towards the ring.

For a night, the sport seemed as alive as anything’s ever been. Then again, maybe that’s just what Lamont Peterson does to Washington, D.C.