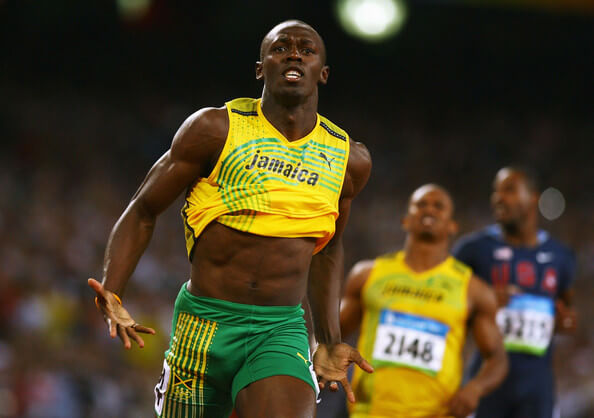 Four years in the making all comes down to the next two weeks. Four years ago this time, I was living in Chicago, looking for a full-time job, watched damn near every waking moment of the Olympics in Beijing and almost went for broke dining off strictly Harold's Chicken. Coincidentally, the one moment from the 2008 Games which went missed by yours truly was Kobe Bryant donning his Superman cape and executing arguably the most clutch moment of his entire career carrying the U.S. Men's Basketball team to the gold medal.

My excuse is a worthwhile one. The game came on at 5:30 in the morning Chicago time, so yeah. There's that. However, something I did witness was the emergence, dominance and birth of a worldwide Olympic icon. That would be none other than Usain Bolt. Usain Bolt Da Gawd, for those familiar. Bolt was arguably the MVP of the '08 Games with Michael Phelps running right by his side. Hell, to be honest, they were both co-MVP's.

Bolt was one of those athletes who encompassed everything I loved, admired and wished I was in an athletic entertainer.

Cocky - If you start letting up 20 meters to go in a race and still win in world-record fashion, yeah, you're cocky as all hell. And this guy appreciates the asshole-ish-ness.

Talented - More than Michael Johnson, Bolt was the most gifted track and field athlete I could ever remember seeing on the biggest of stages.

Bolt's '08 stranglehold is the exact reason why I stand more than anticipated to witness what 2012 stands for. I'll even go so far out on a limb to say this: I'm pulling for every American team, regardless of sport. That's just how the Olympics work. However, when it comes to Usain-related track and field events, I'm still going to pull for America. But let's get one thing clear, I'm going to openly root for Brother Bolt regardless.

Over the course of the next month or so, we'll wonder several things about the Olympics. Can the men's basketball team take home the gold again? Will Michael Phelps retain his aquatic empire that was Beijing in 2008? Can the Chinese take home the sweep in trampolining again? Who is going to be that guy and DVR every single second the entire Olympics? Yet I will tell you this. Usain Bolt is must-see television. I'm serious, even more so than that Stevie J character Twitter seems to have orgasms over every Monday night. His races will command attention and by happenstance, let a race of his air during peak Twitter hours and watch the outcome. He'll be a trending topic quicker than you can say "Bob Marley and The Wailers."

Usain Bolt is a top three reason yours truly will even pay attention to the Olympics. Those more familiar with the world of track and field will hark his performances in recent weeks saying he hasn't resembled the invincibility of yesterday and fellow Jamacian Yohan Blake appears poised to take his place as the Head Jamacian In Charge. To that, I rebut with this. I respect Olympic trials. I respect World Championships. But neither are those are the actual Games themselves. It's different once those lights turn on, people focus on the track and the entire world wants to witness if someone can live up to the hype or not. Ask James Harden.

I'm pulling for Usain and I'm putting my money on him. Even over American teams. Does this make me a communist? Possibly.  But that's not to say I would be hurt in the least bit if the U.S.A. upsets Bolt. I won't. Having said that, I won't be upset either if he walks every last American to the finish line and proceeds to give them the "thanks for coming" dap once he dusts them off by 20+ meters.

And I promise this has nothing to do with the fact Cool Runnings is one of my favorite movies of all time. I swear it doesn't. There's just something special about seeing history create itself in front of your very eyes.