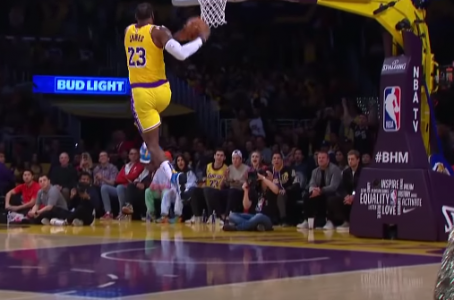 All it takes is one step inside the gymnasium, and you know.

You know where you are and what's going on.

It's not a scent that reminds you. Unlike the fresh-cut grass of the diamond, the aroma of the area is insignificant.

The temperature doesn't tip you off like the frigidity of the rink. Ice is cold, so too is the blanket of frost that seems to hover over your body.

Out on the gridiron, the crisp air signals the time of year. Each breeze that pushes a kick to the left reminds us all that there's a time and place for the gladiator-esque game.

The smells and temperatures signify nothing in the gymnasium.

No, the game itself brings itself to the forefront through sound. The pure sound of a round ball pounding the wooden court. The sweet swish of the net remains unmistakable. The squeak of a tennis shoe chirps in to add more flavor.

Basketball, that glorious game. The sport that could be seen by the blind.

Rhythmically, the ball moves up the court. Through the hoop and back we go again. It goes on as if only a timer could hold it back from eternity.

It's energy, athleticism and nothing to hide behind. There are no helmets to hide the faces. No pads to hide the body. There is no right fielder in basketball.

Everything is in front of the spectator. The game invites itself to your imagination. It seems nothing separates you from the players on the court.

They move gracefully from spot to spot. It becomes clear why they're there and you're here.

When the forward leaps for the rim, it's as if he soars. His awe-inspiring athleticism is enough to make you leap similarly from your seat.

The identification of a ball, a hoop and a being is so simple. Its simplicity is almost too much for us to handle.

There's no way to hide the player who can't shoot. Eventually, he will be left open as if he's dared to put one towards the hoop. If he obliges, he seems to face his demons.

The shot will fly and he will likely be defeated. Statistics are statistics for a reason. If the ball clangs, it's par for the course. However, the opponent will have won.

Despite the changes that take place on the court, we must first understand what we are about to see.

In the professional game, we witness remarkable consistency and talent. The only thing to do is marvel at the fantastic players and the things they do. Sometimes, they do things we've never thought possible. They are the supermen of the realm.

College games give us some of the supermen. The contests also give us pageantry, unpredictability and the belief that anything can happen once the chips are in the middle of the table.

At the high school level, we watch the growth as much as anywhere. The unproven and hard-working can find salvation. The unbridled talent comes along less often than we'd like it to. In some strange way, it can often be the best product to watch.

But when it comes to the sweet-sounding game, there is simply one thing that remains its most admirable trait.

The notion of momentum is often thrown in sports commentary. In baseball, it's only as good as your starting pitcher. In hockey, your goalie. In football, your size and speed.

Eventually, they will all include momentum. However, it's a different force than momentum in the glorious gymnasium.

There, you can watch before your very eyes as a team melts down. The emotional triumph of an underdog to be in the game after a quarter or half is palpable.

This intangible thing has no description apt enough to portray it adequately. If you've witnessed it, you know. Perhaps the only demonstration worthy is that coaches call timeouts to stop this invisible, yet nearly spiritual, phenomenon.

It's a reflection of what we're always told. If you work hard and efficiently enough, the breaks will go your way.

Suddenly, the favorite can't hold onto the ball while the underdog gets easy layups. It doesn't always happen, but the possibility of it keeps us glued to the game.

Aside from blowout, there's no way to know when the game is truly over.

That is, until the timer winds down. The loud and crude buzzer sounds. Once again our ears tell us about the game.

They tell us that it's now over. They remind us that it can't go on for eternity.

2 Replies to “The Sweet Sounds Of The Basketball Hardwood”