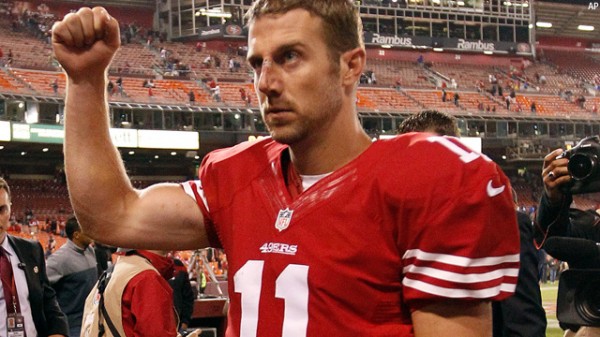 What a difference a month makes. If you just tuned in to the NFL lately, it’s forgiven if you are starting to think that this is Steve Young/Joe Montana redux more than 20 years later, based on the most discussed quarterback change of the 2012 season.

(For anyone who expected a change to happen at MetLife Stadium before Candlestick Park, this is why you shouldn’t bet on football.)

The way the commentary has been flying as of late, you’d swear that it’s all Alex Smith’s fault that he got concussed in the first place.

This is what happens when you’ve become a late bloomer of sorts as an NFL quarterback. The benefit of the doubt – or in this case, the benefit of a team doctor’s clearance – isn’t granted unless you've lit the league on fire from under center.

Smith – through a mix of self-inflicted wounds, franchise mismanagement, a revolving door of offensive coordinators and three head coaches – has been tossed aside rather briskly, despite the gravity of concussions and a career turnaround worth regarding after the post-Jeff Garcia years where 49ers fans endured Tim Rattay, Ken Dorsey, Cody Pickett, Trent Dilfer, Shaun Hill, Chris Weinke, J.T. O’Sullivan and Troy Smith.

Smith’s 19-5 record since Jim Harbaugh became head coach isn’t as insignificant as one may be led to believe. They’re not like pitcher wins, subject to debate between old-school bird dogs and new-school Bill James disciples because several hurlers are used per game. Wins in football are the result of total team effort, but especially in this era of the NFL where truly balanced teams are fewer and farther between than ever before, there are times where the QB is truly the difference between winning and losing.

More often than not in those 24 games, Smith was that difference. Risk-averse decision making, trust in an emerging offensive line, timely scrambles and most of all, sudden unflappability when the game was on the line.

It took seven years for him to get it right, however. For six of those seasons, an absurdly talented defense, a workhorse running back (Frank Gore) and a freak of nature tight end (Vernon Davis) were waiting for him to do just that. Division titles were pipe dreams, and playoff berth flirtations never resulted in a return to glory for a once-proud franchise.

It was clear, once the Niners smacked the same Saints silly in the Superdome, that Colin Kaepernick would be the starter for the foreseeable future. And yet, while he draws rave reviews for slight improvements on what the passing offense has been this season, let’s not kid ourselves here. This team is built on “matriculating the ball down the field” by running hard and passing smart. It’s built on the league’s best defense over the last four years. It’s built on the willingness to abandon the past blueprints of offensive success and accept the now.

Kaepernick has been fantastic in using his powerful arm to at least threaten the defense with the deep pass, if not succeed with it (even though Davis now has two zero-catch games this season with both signal callers, this one against a horrendous Saints pass defense). His mobility extends plays in the same way that Smith’s does, but he appears to avoid the sacks a bit more deftly. We can’t forget that he keeps to the same risk-averse game plan that rejuvenated Smith’s career.

Yet, the Chicago Bears have an overrated defense, and the best defenders employed by the Saints are the lawyers employed by Jonathan Vilma and Will Smith. There is much more to learn about Kaepernick, especially when the Niners visit the New England Patriots in a Super Bowl preview in less than three weeks. Right now, it’s apparent that the Alex Smith Reclamation Project is on hiatus unless Kaepernick is injured or regresses.

So much was made about the images of Smith wearing his helmet for parts of Sunday’s game. The comedy was solid, but predictable. The commentary ranged from “oh well!” to “pack your bags,” with some “what about Alex?” in between - including presumptuous words from FOX commentator and Hall of Famer Troy Aikman, saying that Smith may be regretting re-signing with San Francisco after the team’s dalliance with Peyton Manning.

January 1, 2013, will mark seven years since Alex Smith threw his first touchdown pass in what was dubiously called “the (Reggie) Bush Bowl” at Candlestick between the Niners and the Houston Texans. He tossed his jersey number in interceptions in a painful rookie campaign (11), including one early in the second quarter to Terry Jackson. There was little hope in the stands as fans had seen those kinds of poor decisions one too many times. Yet, somehow, with a little bit of help and the last remnants of pride left, Smith connected with Brandon Lloyd in the end zone a minute before halftime. When it seemed as if he would get himself together, Smith wobbled in that second half after the long-awaited milestone.

Now, there wasn’t an injury to heal from or an equally able quarterback lurking about, but having attended the game in person, that game is almost a microcosm of his career now. Even now and especially then, there was always the hope that someone else can be the savior, the leader, the franchise.

It may or may not be Colin Kaepernick, but it appears that few anymore want it to be Alex Smith.

7 Replies to “The Struggle Of Being Alex Smith”