Ten innings. 45 runs. 50 hits. 12-run leads evaporating while records were falling like dominoes. Hitters salivating over their next trip to the plate as the teams parade through the lineup, while pitchers wonder what they can do to thwart the onslaught. All of it added up to a very loud reminder that there’s no such thing as an ordinary day at the ballpark.

“We’ve seen a lot of things today we’ve never seen before.” That was Philadelphia Phillies broadcaster Richie Ashburn on May 17, 1979, after Phillies outfielder Bake McBride came to the plate for the EIGHTH time that day against the Chicago Cubs. It was the top of the 9th inning and an insane day of baseball was inching towards a conclusion. They say you can’t predict a face card when playing online blackjack and you can't ever predict baseball (even you Suzyn), and never did the axiom ring truer than on that Thursday afternoon in Chicago.

That quote from Ashburn is one of many tidbits you’ll find in Ten Innings at Wrigley: The Wildest Ballgame Ever, With Baseball on the Brink, a wonderful book by author and former Sports Illustrated editor Kevin Cook. 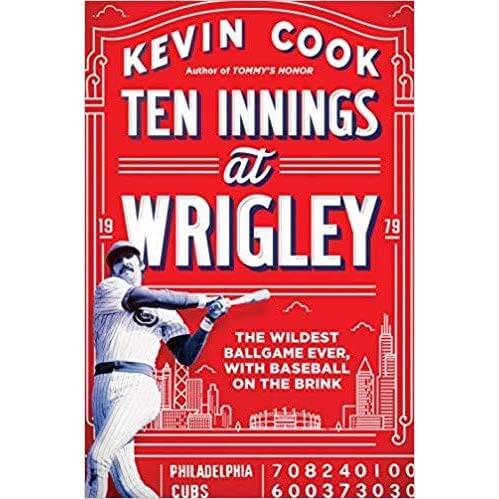 The Phillies struck first with seven runs in the top of the first, sending the bleacher bums looking for the nearest beer vendor. That first half inning was certainly a sign of things to come on that fateful Thursday afternoon. The Cubs struck right back in their half of the first, plating six runs and cutting the deficit to one. From there the slugfest was on, and courtesy of Cook, we can all relive the wildness of that day at Wrigley Field.

One of the most beautiful things about baseball is how the pace of the game lends itself to conversation. Whether between teammates, broadcasters, parents and children, friends or the stranger sitting next to you at the ballpark, there’s an opportunity for nine innings of discovery. From stories of games gone by, strategy to come or dissection of players both now and of the past, the topics are seemingly endless.

In Ten Innings, Cook captures that aesthetic magnificently. Interwoven in the details of that wild afternoon at Wrigley are backstories on the cast of characters in play, breakdowns of the strategies employed, and reminisces from the people who were there.

A wild game that took place during a time of change in the national pastime and when the old school and new school remained inextricably mixed, Cook is able to artfully capture that dynamic and its effect on the sport.

What we’re left with is much more than a retelling of one of the wildest games in baseball history. Instead, Ten Innings is part history lesson, part biography, part strategy guide…all wrapped up in the compelling narrative of Phillies vs. Cubs on May 17, 1979. The result is a wonderfully entertaining, impressively informative book that captures the essence of baseball itself.

Ten Innings at Wrigley is a worthwhile read for any baseball fan who wants to do something more worthwhile with their time than just playing fantasy baseball or playing online casino games. 40 years later, the game still matters.

2 Replies to “Summer Reading: Reliving A Crazy Day At Wrigley Field During A Crazy Time In Baseball”