Penn State is known as Linebacker U, but the program has produced its fair share of excellent wide receivers. Now, the latest (and a bit unheralded) player to come through that lineage is preparing to carry on the tradition, even if the casual NFL fan remains unaware.

The months since Penn State’s Fiesta Bowl victory over Washington have been busy – and productive – for DaeSean Hamilton. After catching five passes for 110 yards and two touchdowns to aid Penn State’s bowl victory, the school’s all-time leading receiver has gone to work improving his draft stock.

And his efforts are certainly bearing fruit.

Despite an impressive collegiate career that includes Hamilton’s program-best 214 receptions, 2,842 receiving yards and 18 touchdowns, the consensus at the close of the season was that he would go undrafted. Just a few short months later, Hamilton is now expected to go in the 3rd or 4th round of the NFL Draft. And he is poised to make an NFL team and its fans very happy.

So why has Hamilton’s stock skyrocketed since the close of his Penn State career? A combination of stellar performances at the Senior Bowl and East-West Shrine Game, eye-opening showings at the NFL Combine and his pro day, and simply the kind of person that Hamilton is.

After an impressive week at the Shrine game, Hamilton earned an invite to the Senior Bowl, where he picked up right where he left off, displaying elite route running and holding his own against some of the best cornerbacks in the country. “It was really fun,” Hamilton told TSFJ of his experiences at each of the games. “I was able to go out there and compete against the guys I’ve been watching all across college football. Just getting out there and competing against a whole lot of the top talent in college football, I thought the whole experience was really fun.”

Those performances got the buzz going, and Hamilton built on that momentum; first by joining his teammates in putting on a show at the combine, and then with an impressive showing at his pro day.

At the combine, Hamilton found himself in a familiar spot: a bit overshadowed by his teammates. After playing with highlight-waiting-to-happen and potential top pick Saquon Barkley and arguably the best tight end in the 2018 draft in Mike Gesicki, sometimes Hamilton’s performances were overlooked.

Hamilton has gotten used to his teammates stealing the show, noting that “if people did watch a Penn State game, they were obviously watching Saquon and Trace McSorley, it’s kind of hard to stick out among that cast.”

That’s not to say he didn’t enjoy his teammates’ exploits. “It was a great thing to watch,” Hamilton said of playing along side Barkley. “It was a lot of fun playing with him, being his teammate. He’s a great teammate, a great kid.”

In Indianapolis, Barkley continued to wow people with his 4.4 second 40-yard dash and his 29 reps of 225 pounds in the bench press. Meanwhile, Gesicki won six of the seven drills at his position, while safety Troy Apke ran a 4.35 40 and won three events at his position. NFL Network kept an Olympic-style medal count, which Penn State dominated with nine golds, three silvers and a bronze. The next closest school won six medals total.

Hamilton wasn’t surprised by Penn State’s dominant showing at the combine, and he credited Penn State strength and conditioning coach Dwight Galt. “I mean as much as it is the individual, it goes back to our training and all the coaching we’ve had, from our position coaches all the way to our strength staff,” reflected Hamilton. “We expected it, we’ve seen that type of talent, but it really comes down to I think a multitude of people, our head strength coach Dwight Galt, he did a great job. He’s gotten me stronger my whole career at Penn State.”

While his teammates were stealing the show, Hamilton was putting forth a typically solid effort. But the bigger development happened at Penn State’s pro day, where Hamilton officially clocked a 4.52 40-yard dash. His speed has been one the biggest question marks throughout the spring, and he acquitted himself well, with some scouts clocking him even a bit faster, from 4.47 to 4.51. After impressing with his route running, Hamilton was able to quell the most pressing concern with his game.

Did Hamilton find any motivation in the fact that he was projected to go undrafted at the end of his college career? “Yeah, absolutely,” he said. “I know what I’m capable of but not a lot of people got to see it. I believe in my senior year I did well enough to stick out among all the playmakers this team had on both sides of the ball. I try not to pay that much attention to that stuff but obviously it’s hard. It always gave me motivation to keep working hard and never be satisfied.”

While Hamilton has shown what he can do on the field and improved his stock this offseason, it’s his character that should give confidence to whatever team drafts him and makes him a prime candidate for future fan favorite.

Born to a military family, the expected hard-work and discipline that come from that upbringing are evident both on and off the field. Hamilton excelled academically at Penn State. He graduated with a degree in advertising and public relations and is working on a second degree in telecommunications while earning Academic All-Big Ten honors.

“They’ve been there every step of the way,” Hamilton spoke of his family. “My mom and dad have instilled a lot of life lessons in me that I’ve been able to carry my whole life. They instilled, I guess, discipline on me so that’s just helped me develop into a more mature young man at a younger age.”

He was also recognized for his hard work and leadership, earning the Captain’s Award, the Iron Lion Award for strength and conditioning, and the Lions Pride Outstanding Senior Award for a senior with the greatest contributions to the football program.

Hamilton has a special bond with his older brother, Darius, who is autistic. That bond tightened out of necessity when his mother was diagnosed with cancer. It was Hamilton who stepped up to care for his brother as his mother went through treatment, not only helping Darius with daily tasks but working hard to include him in his life. DaeSean’s friends were Darius’ friends, too. “My brother is one of the main reasons why I do what I do. My family is one of the bigger reasons I play football, because they enjoy watching me play.”

So, what can you expect if your team calls Hamilton’s name on draft day? “They’re gonna get a hard worker, a guy that’s really gonna come in and as soon as I step foot in the facility I’m gonna try to earn my keep and be consistent. I believe I’m one of the better receivers in this draft, the best route runner, a top 10 receiver so really just working and keeping my goals in sight and just making sure all the things I’m preaching I prove. Great route runner, great hands, great football IQ.”

Are there any current NFL players he compares himself to? “Guys like Doug Baldwin and Jarvis Landry, Julian Edelman. They are guys I kind of see myself fitting the mold of and try to emulate my game after.”

A hard-working, well-rounded, cerebral and grounded young man, Hamilton has seen his discipline and hard work pay off as he climbs draft boards and prepares to prove himself at the next level. Wherever he lands, he’s sure to become a fan favorite. 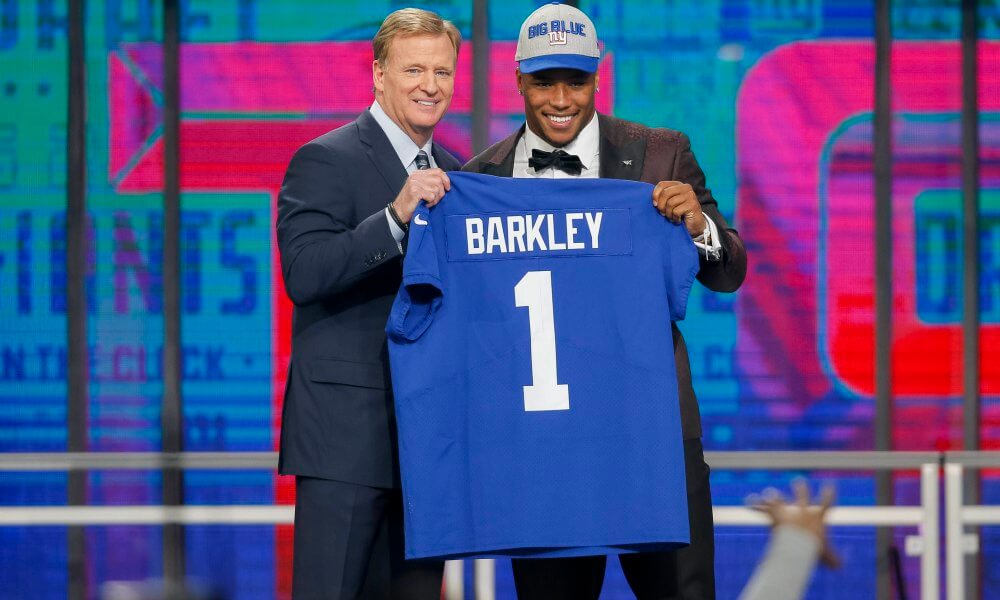 Football 12 Takeaways From The First Round Of The 2018 NFL … 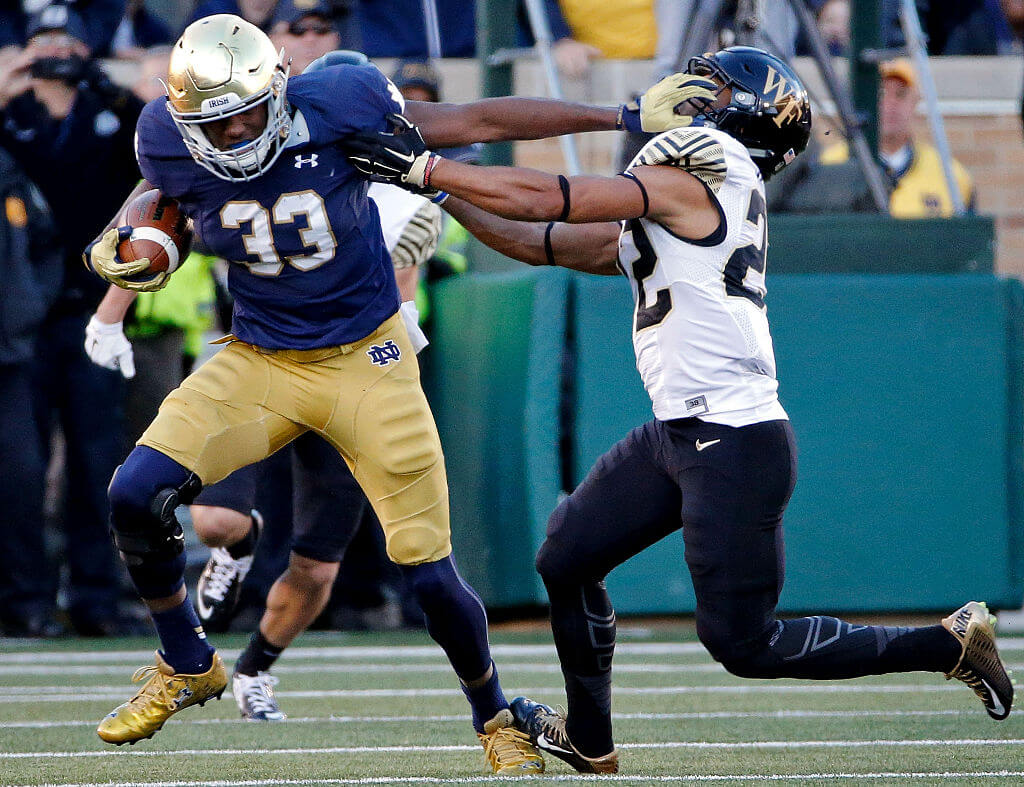