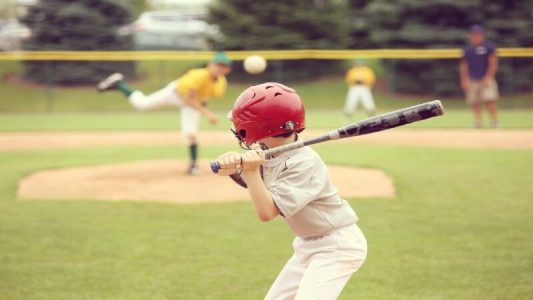 “The Sandlot” is one of the greatest baseball movies of all time, and if you don’t agree, you can just stop reading this right now. I’m not even joking. Go away.

If you’ve never seen “The Sandlot,” first off, shame on you. Secondly, where the hell have you been the past 20 years? Third, go watch it right this instance. It is a classic … a timeless classic at that.

If you have seen it and don’t like it, there’s a better than excellent chance that I hate everything about you. The movie has it all: baseball, children getting into shenanigans, a behemoth dog, baseball, James Earl Jones, Babe Ruth references all over the place, baseball, that lady from “Animal House” and “Indiana Jones,” Jesse Hall, baseball and a sweet tree house. It’s awesome.

But you know what’s not awesome in this fantastic movie? Scotty Smalls, the protagonist in and narrator of this cinematic masterpiece.

I bring this up because yesterday, the one and only Justin Tinsley and I got into a bit of a heated email debate on The Sports Fan Journal email chain about Smalls after a reference to Benny “The Jet” Rodriguez.

Now I’ll concede Tinsley’s point that Smalls is a vital cog in the movie. No shit — he’s the main character. Without Smalls and all his indefensibly annoying traits, “The Sandlot” wouldn’t be “The Sandlot.” So congrats to Smalls for that. He played the worst character in the movie to perfection.

Here is why Smalls sucks, and if you don’t believe, “You’re killing me, Smalls,” is the most memorable quote of the entire movie … because Smalls sucks.

1. Kid couldn’t even throw a baseball.

Now I know that it’s the job of a father to teach his son how to properly throw a baseball — so long as he’s not this guy — and that, as we find out, Scotty’s real dad is MIA. I guess that’s a somewhat legitimate excuse … except for the fact that he and his mom move to the sandlot neighborhood with Bill (played by Dennis Leary), Smalls’ mom’s boyfriend or fiancée or whatever the hell he is. And on top of that, Bill is an avid baseball fan who even makes it a point to have a catch with Smalls.

By the time you’re old enough to be playing out on a sandlot by yourself, you should know how to throw a baseball, no excuses. Did Smalls have absolutely no friends in his old neighborhood? Did he never play little league? Scratch those last two questions. We already know the answer is no to both of them.

Then, miraculously, he learns to be competent at throwing — and catching and hitting, both of which he was clueless at — after a day with Benjamin Franklin Rodriguez as his teacher. Please. I know a guy who throws like Smalls did at the beginning of the movie. He’s on my company softball team. And I hate him. Just like I hate Smalls.

Just look at this.

Seriously. Look at it. That’s the hat Smalls chooses to wear out to the sandlot. The brim is about 8,000 too long for his hat and his stupid head, and it has a stupid fish on it, yet he puts that nonsense on his skull. The fuck is this kid’s problem? Honestly, has he never seen what a normal baseball cap looks like? That hat is more egregious than Geno Smith’s attire at the NFL Draft, and I don’t care if Ed or Kenny agree with me or not.

Get a normal hat, weirdo.

Warning, a spoiler alert follows. At the end of the movie, the scene cuts to some schmuck in a broadcast booth with a stupid-ass hat on calling the Dodgers game.

That schmuck with the stupid-ass hat (that same stupid-ass fish hat he wore so many stupid years ago) is Smalls, all grown up and, wouldn’t you know it, getting the chance to call his friend and baseball mentor Benny “The Jet” stealing home in the big leagues. Heartwarming story … except for the fact that it’s an absolutely atrocious call. First of all, why would any announcer in his right mind think there’d be “fireworks” from a pinch runner on third? Also, who the fuck puts in a pinch runner for a guy on third? No one.

Then the call itself is so absurdly underwhelming … starting with, “Jet's got a suicide lead.” No announcer has ever said that ever in the history of baseball. Vin Scully wouldn’t let Smalls get him a cup of coffee, let alone let him in the broadcast booth. Horrible.

Now try not to want to punch that stupid kid in the face. (For the record, I do not condone hitting children but I was a child when this came out myself. I would have punched Smalls back then.)

I’ll let the one and only Mark Trible display how absurd that is: “Babe Ruth was probably the most well-known American figure worldwide [at the time]. But nah, that kid didn’t play baseball so he didn’t know him? * Cris Carter voice * C’MON, MAN!”

All movie long, the other, way more awesome characters are talking about The Great Bambino. The Sultan of Swat. The King of Crash. The Colossus of Clout. Babe Ruth. He thought Babe Ruth was a woman. As Squints said early on, the kid is an L-7 weenie. That is a fact.

“The Sandlot” is pretty much a flawless movie. But that doesn’t make Smalls any more likable. Worst character in the film by a mile. You're killing me, Smalls.

13 Replies to “You’re Killing Me, Smalls: 4 Reasons Why Smalls Is The Worst Character In 'The Sandlot'”