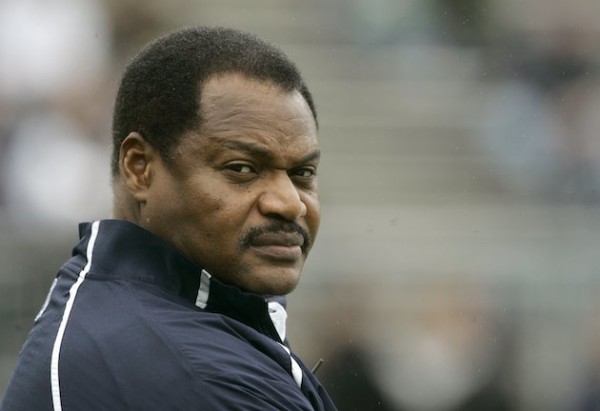 According to Rivals.com, the Ohio State Buckeyes currently have the second-ranked recruiting class in the nation, behind only Nick Saban's team down in Tuscaloosa. Yet the biggest recruit that head coach Urban Meyer just signed won't be found on any of those recruiting lists — not Rivals, not Scout.com, not ESPN, not anywhere.

That's because Ohio State's best recruit won't be putting on pads or hitting anybody. Instead, he'll be roaming the sidelines, scouring the recruiting trail and doing the best job in America of coaching up the defensive line. That recruit is none other than Larry Johnson Sr., the longtime defensive line coach at Penn State, who decided to turn down an offer from new Nittany Lions head coach James Franklin to stay on at the university he's served so well for more than 19 years and instead do the the unthinkable — head west to the Horseshoe.

For those of you who don't know, Larry Johnson Sr. is the best assistant coach most of the country probably doesn't really know much about. But you should. While he's never been a coordinator or head coach at the collegiate level — OK, technically he was interim head coach in the weeks between Bill O'Brien's departure and Franklin's arrival at Penn State — he's been hands down the best defensive line coach in the nation. Year in and year out, he's developed top NFL talent, the likes of Courtney Brown, Jimmy Kennedy, Anthony Adams, Devon Still, Jared Odrick, Aaron Maybin, Ed Johnson, Tamba Hali, Jordan Hill and soon to be DaQuan Jones.

He's coached four Big Ten Defensive Lineman the Year winners — Brown, Hali, Odrick and Still — seven first-team All-Americans and 15 first-team All Big Ten performers. Plus, he just so happened to be the one recruiting a whole heck of a lot of these guys. In fact, Johnson has widely been considered Penn State's best recruiter for years now.

Oh, and he's also the father of former 2,000-yard rusher Larry Johnson Jr., the guy who was robbed of the Heisman because Carson Palmer played a nice game on national television against Notre Dame, and who also became a Pro Bowl running back for the Kansas City Chiefs. His other son, Tony Johnson, played wide receiver at Penn State, and his daughter Teresa played softball at Penn State.

It's perhaps Urban's biggest coup since taking the reins in his hometown state. The rest of the Big Ten was already terrified of Meyer moving in and running roughshod over the competition. Now he gets one of the best position coaches and recruiters in the entire nation to join him — poaching him from a rival no less.

In the eyes of many a Penn State fan, it's a heartbreaking loss. Johnson was the last of the old guard on the Penn State staff — the lone bridge to the celebrated and now troubled past. When the fallout came from the entire mess a couple years ago, he was the one coach that every Penn State supporter wanted to stay. When O'Brien kept him on board, it was lauded as his best coaching decision he could have possibly made. And when Franklin came in, every Nittany Lion fan prayed L.J. Sr. would stay.

He didn't. And I can't blame the man. He had served his time, nearly two decades, and served it well. He turned down opportunities to advance at other universities, most notably shunning Michigan State for a chance to be the Spartans' defensive coordinator. Penn State was where he wanted to be, where he wanted to rise up the ranks. But he never quite got that chance, was never able to move up the ladder when the new regimes came in. So instead of remaining put, he decided to join forces with the enemy, giving the Buckeyes even more recruiting and coaching power.

I know Ohio State is a school that can recruit itself and that Meyer himself is a master recruiter, so some Buckeyes fans may not fully grasp just how big of a hire this is. Larry Johnson basically owned the Maryland territory in recruiting at Penn State and was the sole reason top defensive line recruits like Thomas Holley chose Penn State. Want proof? With the news that Johnson was leaving, Holley, one of the most highly regarded players in the incoming freshman class of 2014, changed his commitment, opting instead to head to Urban's old stopping grounds in Gainesville.

It's a huge blow for Penn State. And an even bigger gain for Ohio State.

If you think Urban Meyer and company already were a challenge too tough for the rest of the Big Ten to consistently overcome, it's only gotten more difficult. Larry Johnson Sr. isn't just any assistant coach — he's a true difference maker both on the sidelines and the recruiting trail.

So as impressive as Urban Meyer's recruiting class is shaping up to be, his biggest recruit is actually the hexagenarian who's crossing the border from Pennsylvania to Ohio.