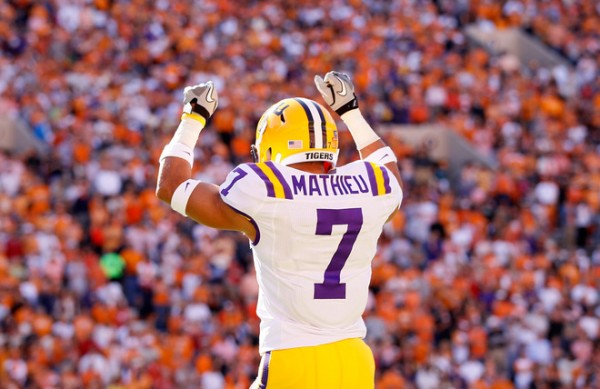 A couple weeks ago, my esteemed colleague Joe Simmons asked, "Does anyone really deserve the Heisman this year?"

Well Saturday, we got our answer ... and that answer is LSU cornerback, Tyrann Mathieu.

As LSU fell behind and not only trailed at halftime, but didn't even have a single first down, it was the sophomore do-it-all corner/return man who turned the tide and catapulted the Tigers to the eventual 42-10 annihilation.

First, it was his electrifying 62-yard punt return for a touchdown to finally put a dormant LSU attack on the board.

Then he damn near did it again, with perhaps an even more spectacular return that he failed to take to the house.

In all, the Honey Badger finished with 119 yards on four punt returns in the SEC title game, finishing with more all-purpose yards than anyone else on the field. He also added a fumble recovery and four tackles, and Mathieu was, without question, the best player on the field.

Sure, he may have had a DeSean Jackson moment, but he also was the man who propelled LSU to remain undefeated and set the stage for a rematch with Alabama in the BCS title game. 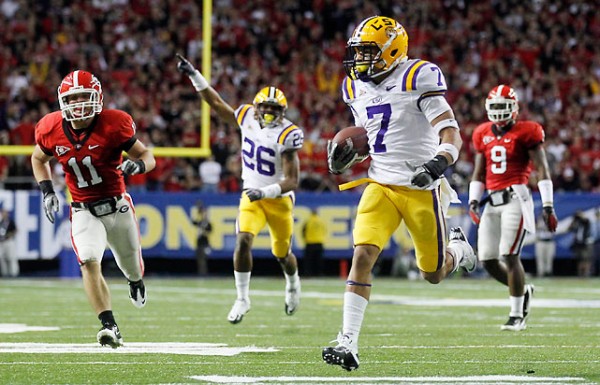 It was a Heisman moment if ever there was one and, truthfully, Mathieu has imposed his will more this season than any of the other Heisman candidates announced last night. In just his second season, Mathieu has already set the all-time record for forced fumbles for LSU. This season, he's forced five of them ... and he's added two interceptions and four touchdowns to boot. Oh, the standout cornerback that's picked up right where Patrick Peterson left off also just so happened to start at safety in the final regular-season game against Arkansas in place of the injured Eric Reid, a game in which he returned a punt 92 yards for a score. Not only is he talented, he's versatile as well.

Plain and simple, Tyrann Mathieu has been the best player on the best team all season long, and he's made more high-impact big plays in key moments than anyone else in the nation. That includes Andrew Luck, Trent Richardson ... and yes, even Robert Griffin III. With Saturday's impressive performance, he proved he deserves the Heisman.

Of course, we all know Mathieu won't win it. There are a number of reasons for that. For starters, I find it hard to believe that any of the Heisman voters will endorse a guy who was suspended for failing a drug test. Then, there's the infatuation of demanding the trophy go to either a quarterback or running back. And, of course, the incredible bias against defensive players. Just as Ndamukong Suh was the best player in college football but came away from the Maxwell Club empty-handed, so will Mathieu.

But Saturday -- all season long, really -- Tyrann Mathieu showed the world he deserves the Heisman Trophy as much, if not more, than anyone.