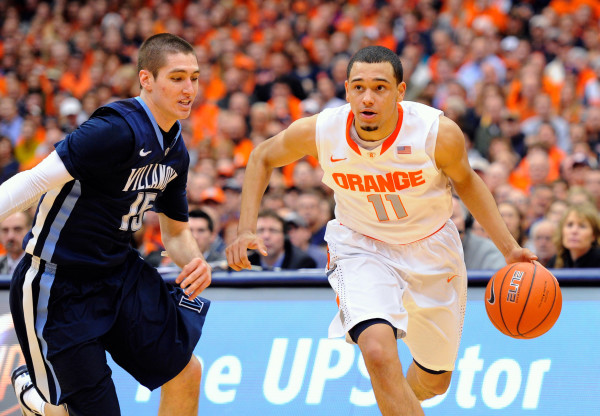 Andrew Wiggins. Jabari Parker. Julius Randle. Aaron Gordon. And most recently Joel Embiid. These are the names you've heard most in regard to the freshmen roaming the college basketball landscape, and for good reason. Wiggins was the player everyone in the NBA was supposed to be tanking for. Parker was close behind and took the NCAA scene by storm. Randle and Gordon constituted the versatile big men with the NBA bodies. And Embiid has shown tantalizing skills as a raw big who gets ever more polished with each game he plays.

Yet none of them have had a bigger impact than Syracuse's Tyler Ennis, the diminutive point guard from Canada.

Ennis is the engine that makes the undefeated, top-ranked Orange go. While his numbers may not jump out at you — 11.8 points, 5.7 assists, 3.3 rebounds and 2.2 steals per game on 42.7 percent from the floor, 37.5 percent from three and 75.7 percent from the line — all you have to do is watch Syracuse play to understand the effect he has on each and every game.

For a 19-year-old who has played in (and started) just 23 games at the collegiate level, Ennis has poise beyond his years. That's evident by the trust Syracuse coach Jim Boeheim has in the freshman point guard. On a team with senior leaders C.J. Fair and Baye Moussa Keita, Boeheim always puts the ball in the hands of Ennis. Given the tremendous talent and success of a player like Fair, you'd think the longtime coach would do what a lot of coaches do and put the ball in his senior leader's hands come crunch time. Yet watch any Orange game and you'll see everything running through Ennis even in the most crucial moments.

That's because Ennis always seems to make the right play. He's a point guard you can truly trust. That's clearly shown in his hard-to-fathom 4-to-1 assist to turnover ratio. And it's most evident when Cuse really needs him. Just check out what Ennis has done at the end of Syracuse's five closest games — the only games in which the Orange did not win by double digits.

Take, for instance, the last seven minutes of the Orange's 68-63 victory against St. John's in Madison Square Garden back in December. With the Orange down 58-56, Ennis hit Fair for a jumper to tie the game. After the Red Storm went up two again, Ennis calmly nailed two freebies to tie it up again with less than five minutes to play. He followed that up with a layup to give Cuse a two-point lead and a little later helped extend the lead to four by assisting on yet another Fair bucket, 64-60 Orange with less than three to play.

And Ennis just kept coming. After a St. John's free throw, Ennis assisted yet again on a Fair score to make it 66-61 with just over a minute and a half to play, went down and nabbed a steal on defense, and eventually sank two more clutch free throws to seal the deal and give the Orange the victory.

You can also look at Syracuse's 49-44 win against Miami in the Orange's first game of 2014. With less than six minutes remaining, Cuse trailed by five. Then Ennis found Rakeem Christmas in the paint for an easy bucket. After Jerami Grant cut it to a one-point game, Ennis hit — guess who — Fair for the go-ahead bucket. He followed that up with a layup to extend Cuse's lead to three with less than three minutes remaining.

But the Hurricanes kept coming, scoring to make it 43-42 with just over two minutes remaining. Ennis responded with another layup, again extending the lead to three, and he eventually put the game away by sinking two more clutch free throws to make it a two-score game with just eight seconds left. 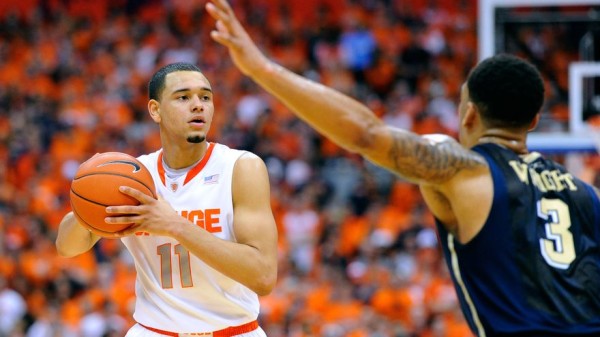 Then there is the 59-54 victory over Pitt. The game was tied with less than seven to play. That's when Ennis went back to the C.J. Fair well, hitting his reliable senior for the go-ahead bucket. After Pitt's Lamar Patterson erased that lead and then some with a three, Ennis tied it up at the line. Minutes later, with Pitt again up by one, Ennis got to the hole and converted, making it 53-52 Orange with less than two minutes to play. Then he hit another layup with 31 seconds left, 55-52 Cuse.

The Panthers cut it to one again following a couple free throws with just five seconds left. Then they decided to foul the freshman point guard, and all Ennis did is calmly step to the line, sink two more free throws — just as he did against St. John's and Miami — and force Pitt to go for a three. Instead, the Orange fouled, Patterson missed and the game was essentially over, Ennis's buckets proving to be the difference.

That brings us to the crazy 91-89 win against Duke to usher in February. In the final 1:08 of regulation and the entirety of overtime, it was Ennis who propelled Syracuse to victory. To start, he looked to put the Orange in the win column not once but twice at the end of regulation, first getting yet another late-game layup to put the Orange up by three with 1:08 remaining. Then, he nailed two free throws with five seconds left to once again put Syracuse up by three and all but ensure victory. Well, until this happened anyway:

No matter, Ennis was undaunted. Duke came out and hit a three in overtime to take the lead, but Ennis calmly answered by hitting Grant to cut Duke's lead to one. Then, after the Blue Devils went one of two at the line, Ennis notched another impressive assist, finding Grant for a dunk to tie the game. Duke took the lead again. Ennis answered once again by hitting Grant for the equalizer.

Duke responded with a three. Ennis converted two free throws to pull his team within one. After a Duke miss and two freebies from Grant, Ennis went to the line with 12 seconds left. Just like he did in all of Cuse's earlier close games, the freshman point guard calmed his nerves, composed himself and sank two more clutch free throws like they were nothing, 90-87 Cuse with 12 seconds left.

Not wanting to make the same mistake twice, Ennis wisely fouled Rasheed Sulaimon to prevent Duke from getting the chance to tie. It worked, as the Orange held on in those final few seconds to remain unblemished.

Finally, there was the 61-55 win against Notre Dame last week. In that game, Ennis wasn't called upon to make as many late-game plays, since his assist with 4:29 remaining put the Orange up by 10, but he still came away with a big rebound with two minutes remaining and the Irish within five, following that up with an assist to extend the lead. Then he hit two more clutch free throws with less than a minute left to keep Notre Dame at arm's length, as the Orange continued its undefeated start to the season.

In the most important moments in the closest games, Ennis has been nearly flawless. More impressively, he's done it with the ball always in his hands during those key moments.

So while the names mentioned earlier will most likely get called on draft day well before the Syracuse point guard's, no freshman in America to date has been more important, or has had a bigger impact, than Tyler Ennis.