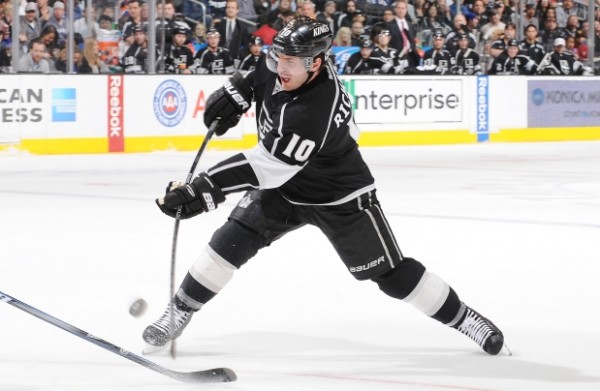 If you've been watching the 2012 NHL Playoffs (and if you haven't, what are you waiting for?), you know there's been no shortage of stars rising to the challenge.

Big names like Brad Richards, Ilya Kovalchuk and Alexander Ovechkin have come up big. Young superstars like Claude Giroux and Zach Parise have put their talents on full display. Netminders like Jonathan Quick, Henrik Lundqvist and Mike Smith have stolen the show and a few games.

But no player has been any more important to his team's postseason success than Mike Richards of the Los Angeles Kings.

Having been privileged enough to watch Mike Richards night-in-and-night-out for his entire career prior to this season as a Flyers fan, I already knew what the Kings were getting in the former Philadelphia captain. The man is as good of a defensive forward as there is in hockey and as versatile as they come. He can score goals, rack up points and play anywhere from in front of the net, to in the corners and even at the point on the power play. But Richards' real bread and butter is his defensive prowess and physical play, and those are the traits that have made him arguably the most important cog outside of Jonathan Quick in the eighth-seeded Kings' run to the Western Conference Finals.

Make no mistake, Richards' teammates have been brilliant. Captain Dustin Brown leads LA in goals and points this postseason. He leads the entire NHL in playoff plus-minus at plus-9, and he's drawn more penalties than anyone I can remember through two playoffs series. Anze Kopitar has been his usual fantastic self. Drew Doughty has been a workhorse. And everyone has chipped in to help the Kings become the first team to advance to the Conference Finals, where they will face the Phoenix Coyotes. (Yes, the Coyotes, who finished sixth in points in the West, and the eighth-seeded Kings are in the conference finals.)

But it's been Richards who is out there for the most important shifts. He's often the guy who starts the game, coming up with some early and huge goals, tone-setting hits and all-around dominant shifts. And he's always the guy out there seemingly every other shift come the third period, as the Kings are holding the lead and looking to shut down the opposition. Nothing he does is flashy. He doesn't have the shot of Kovalchuk or Ovechkin, the grace of Brad Richards or magician moves like Giroux. He's not a burner or a giant. He's just the best defensive center in the Stanley Cup playoffs, a guy who leads by example with every shift.

Here in Philadelphia, fans and even the organization that inked him to a 12-year contract questioned whether or not Mike Richards could lead a team to Stanley Cup. This despite his clear desire on the ice, his Conference Finals appearances and even getting to within two victories of hoisting the most prestigious trophy in sports. Well, if Philadelphians have been staying up and watching, they've seen he absolutely can.

There is no question he has what he never did in Philadelphia with standout goaltender Jonathan Quick, but he's playing the same unmistakable Mike Richards game he played all those years on Broad Street. Mike Richards is the same as he ever was, and that's a guy who's capable of helping bring an eight seed to the conference finals and just eight wins away from the Cup.

4 Replies to “The Same As He Ever Was: Mike Richards and the L.A. Kings”