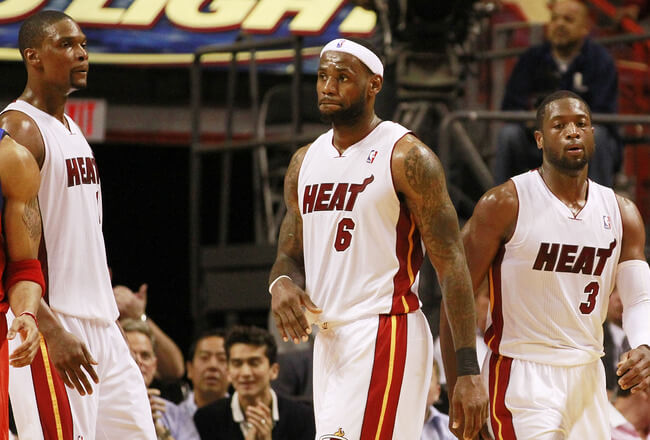 If you looked at the 2011-12 and 2012-13 NBA seasons in a vacuum, you'd swear on your life that LeBron James was the greatest basketball player and leader the game has seen since the days of Michael Jordan and the Miami Heat the most formidable collection of talent since the dynastic teams of the 1970s and 80s. The league is Heat's for the taking, and the Heat belong to LeBron James.

Yet just a few short years ago, the narrative was nowhere near what it is today. Yes, many people did project the Miami Heat becoming NBA champions, as they did, but few saw the triumvirate of LeBron, Dwyane Wade and Chris Bosh morphing into what it's become today. In fact, when the newest version of the Big 3 took Miami by storm, there were questions about chemistry, duplication and alpha-dog status. Here were three all-stars, one an NBA champ, another an MVP and the third a walking double-double, trying to figure out how to adjust their games to fit together.

Coming after a highly scrutinized playoff exit in his final bow in Cleveland, some questioned LeBron's mental fortitude in the clutch, along with his leadership skills — while others pleaded with the man to step up. Thus, the Heat were the incumbent Dwyane Wade's team — a man who had proven his merits with a Finals MVP (and a helping hand from a still-effective Shaquille O'Neal). He was the face of the Heat, so the team was his. Wade was the alpha dog of that franchise, despite LeBron's clearly superior game, in the eyes of many. And Bosh? Well, he was simply the third wheel in this all-star trio.

While Miami made it all the way to the NBA Finals in year one of this experiment, the questions still lingered. Yes, LeBron clearly asserted himself as the team's — and the league's — best player, but there was that matter of coming up short in the Finals to Dirk and the Dallas Mavericks. Could he really be the "leader" of the team when he failed yet again, with Wade's title — coming against Dirk's Mavs, no less — hanging in the back of fans' minds?

As for Wade himself, he looked to be slowing down by all the hits he'd taken over the years, playing a similar slashing style to that of Allen Iverson. And Bosh, well, he got a parody song named after him for his penchant for disappearing when the Heat needed him the most.

Last season, things began to change. Fueled by the scrutiny and his desire to get back to being himself, James took his game to yet another transcendent level and put any and all questions directed his way to rest. Not only did he have the stuff to become the Heat's alpha dog, but he asserted his basketball will so dominantly that Wade gladly conceded his team to the King. Miami ran through the league, LeBron became legend and the entire NBA was put on notice that this team — really any team with James — could win not 4, not 5, not 6 but as many damn titles as LeBron pleases.

The narrative began to change. LeBron took the mantle from Wade and made the Heat his team. Wade played a wonderful, powerful sidekick to James, and Bosh made the necessary adjustments, becoming an integral part to the Heat's championship. 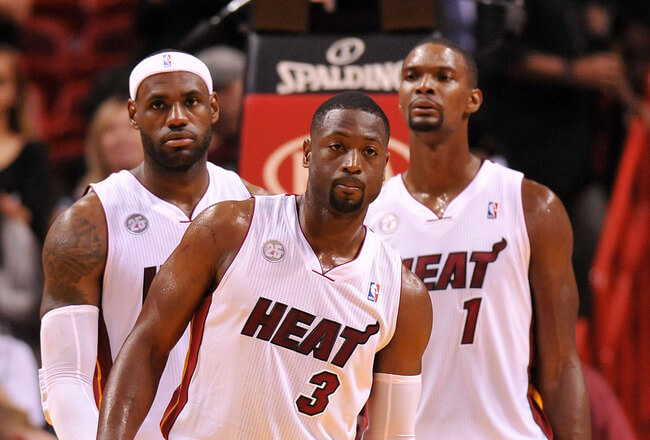 But the reorganization didn't stop there. This year, the Heat went on a record-threatening run through the league, annihilating everyone in its path. James continued to prove there is no discussion about the best in the game — it's LeBron and everyone else. This was nothing new. Following last season, you could just tell James was too locked in as a player and a man to let his game slip even a little. He's the best, and no one is catching him anytime soon.

Yet the same could not be said for his most famous running mate. Dwyane Wade, while still a very good player, is nowhere near his superstar status any longer. Injuries have taken their toll, and his game has slipped. He may still explode for a 30-point game here and a 30-point game there, but he can't carry a squad the way he once did. Good thing he has LeBron … and Chris Bosh.

If you've been watching the 2013 NBA playoffs, you've noticed that the second-best player on the Miami Heat is no longer Dwyane Wade. No, that distinction belongs to Chris Bosh, who simply seems to do whatever Erik Spoelstra asks of him whenever the head man asks it of him. Pick up Wade's scoring slack? No problem. Crash the boards? Done. Hit perimeter shots and open up the paint for James? Sure thing. Block a few shots? Absolutely.

Name it, and Bosh does it. He's become the Robin to LeBron's Batman, while Wade seems to be hanging out at the Justice League with the other also-rans. Truth be told, watching this series with Chicago, Wade has been utterly forgettable, to the point where you'd say a handful of Bulls are better than him if you watched these games with no prior knowledge of Wade's abilities. And the more he's looked slow and old and, frankly, pedestrian, the more guys like Norris Cole and Chris Andersen have shined.

This is not to count out Wade or relegate him to completely washed-up status, but it is to point out the markedly rapid reorganization of the Miami Heat's Big 3, even in the midst of a title defense damn near everyone expects them to cap off.

Three years ago, I'm not sure anyone would have guessed just how different we'd be looking at these three players and this team. Certainly there are legions of NBA fans who knew it was only a matter of time before LeBron fully asserted himself as the once-in-a-generation player he's become and took over as the Heat's undisputed alpha dog, but I'm not entirely sure, particularly after the pressures of year one, that anyone saw Chris Bosh leapfrogging Wade and turning the Big 3 on its head.

Yet here we are, with the Heat just five more wins away from a third straight Finals appearance, and things couldn't be more different for Miami than they were just a few short years ago. There's been a reorganization of Miami's Big 3 … yet they look just as imposing as ever, thanks largely to the sublime play of LeBron James.

5 Replies to “The Reorganization Of The Miami Heat's Big 3”