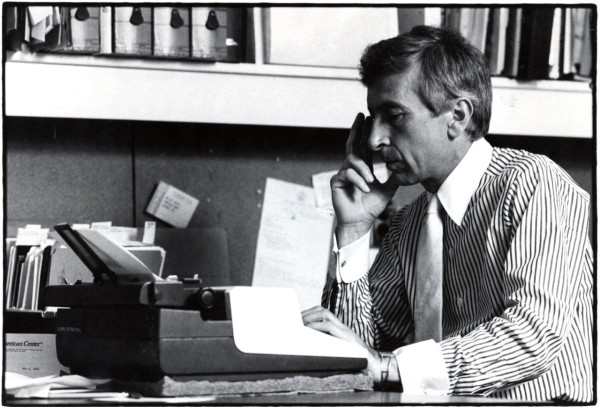 I have a confession to make. Things don't always come up smelling like roses at the TSFJ e-offices.

I won't say it happens on a daily basis, but at least two or three times a week, the three editors, Eddie Maisonet, Kenny Masenda and myself, have some back and forth on the direction of the site and what we should and should not write about. Oftentimes, we bring the staff into the discussions as well, and every now and then, emotions boil over and we go at it. It happens.

At the end of the day, we have these tough conversations, sometimes in an unpleasant manner, because we genuinely care about the quality of the content we publish on our website. The fact that we all have a genuine love and respect for one another makes it easier, but that doesn't mean it is easy. This is not a discipline for those expecting something easy.

With the recent announcements of mass layoffs and high-profile online sportswriting sites folding, I'm sure more and more online sportswriters are having similar conversations. In fact, several articles have been written on sportswriting in the past two weeks. Both Awful Announcing and VICE Sports ran thoughtful pieces, and Black Sports Online tackled the subject last week in a post that asked, "What is the Future of Sports Blogging?"

Author Robert Littal brings up some interesting points in the post, but I can't be anything other than even more saddened by the ultimate conclusion. That being: This is the landscape we live in, and it's better to adapt and "dumb down" some writing to make a buck.

As a professional journalist in my day job and a graduate from Penn State's journalism program way back when in the halcyon days of 2006, this direction sickens me. And yet, Littal makes a point. Sites like Sports on Earth and The Score weren't getting enough return on their investments, not getting enough page views or clicks, not making enough money, so the sites had to be axed. Adapt or die.

But maybe, just maybe, it's not the more traditional, more long-form, more journalistic sites that have to adapt. Maybe it's the culture as a whole. If we, the sportswriting community and the sports-reading community, demand better, maybe the future won't consist of endless slideshows and quick-hit bullshit. Maybe, just maybe, if we demand more from ourselves and demand more from what we consume, we can get back to an era of great writers spinning true masterpieces, whether they be short or long, graphic-loaded or text-heavy.

I suppose I'm being overly optimistic in saying there is a real audience out there for more. The qualities that used to matter mattered for a reason — accuracy, thoughtfulness, integrity, grammar. They have been replaced with being the quickest or the loudest or the most sensational, and it's resulted in a world where talented writers, truly talented writers, get drowned out by assholes who couldn't write their way out of a paper bag.

The most depressing part is that the solution so many writers seem to decide on is to cater to the mindless drones. It doesn't have to be this way. It really doesn't. We can decide, by what we write and how we write it, by what we read and how we share it, that there is a better way. We can demand more. We can seek out editors, study the great writers and write with integrity and pride. We can refuse to tolerate hastily written rubbish, stop reading writers who can't even use proper grammar or sentence structure. And we can make it a point to be meticulous and clean in what we write.

The writing profession isn't about making money. It never has been. It's about writing with a purpose and a meaning, about making people think and act and interact. It's not about clicks and page views and "HEY LOOK AT ME." At least it shouldn't be. Yet that seems to be exactly where we're at.

At its very core, writing has always been about sharing information and making a difference. If we're writing the same shit as everyone else, piling on the same tired stories because any noise is good noise, then we're just going to keep seeing the demise of the profession.

Every writer should ask himself or herself before submitting a piece, before hitting the publish button, "Am I proud of this? Did I really put my heart into this?" If the answer is no, don't post it just because you feel like you have to. You don't have to. Believe me, you don't.

If we, as a community, really want to keep this craft alive and well, we have to raise the level of professionalism. That means being right, not being fast. That means carefully crafting your thoughts and backing them up with evidence, not throwing up the first thing that pops into your head. That means taking the time to read the thoughtful work of others and avoiding falling into the "PLEASE CLICK ME" trap.

As someone who toils for this labor of love, working at it tirelessly every single day, it sickens me to see so many once proud writers throw their hands up in the air and cry uncle. This isn't an easy line of work, and it shouldn't be. But so many seem content to take the path of least resistance, content to get their clicks, collect their checks and pretend they put out good work, quality be damned.

If that's what we want the future of sportswriting to be, we're well on our way. But if we want more, if we want the Sports on Earths and The Scores to succeed, we have to do it together. We have to go back to the roots of writing, the roots of journalism, the reasons we got into this field in the first place. And we have to go out and read the writers who are doing just that and avoid the ones who make a mockery of a once proud discipline.

The future isn't determined by popularity and clicks alone. It's determined by the people. So really, the future of sportswriting isn't shorter or dumber or longer or smarter — it's whatever the fuck we, as a community, decide to make it. And that's exactly why we here at TSFJ continue to put our hearts and souls into this endeavor. We care. And we are fed up. It's partly why we started this website in the first place — to stand up for quality writing that has something meaningful or fun to say.

It's time to take a stand and demand better. Because at the end of the day, the future of sportswriting is exactly what we make it.

Related: Why I Stopped Being a Professional Sportswriter