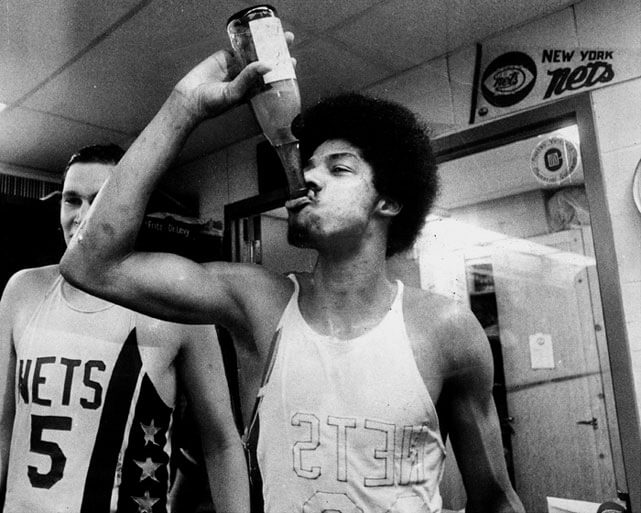 Being brought up as a Philadelphia sports fan from the moment I came into this world, there was no athlete who brought out more Brotherly Love than Julius "The Doctor" Erving. Sure, Philadelphia had its legends — Wilt, Moses, Schmidt, Carlton, Clarke, Parent, Bednarik, Montgomery — but none brought out more favorable descriptions than Dr. J.

Hell, my father, a man who would put basketball at the bottom of his list as far as the big four are concerned and a very casual NBA fan to say the least, talked more about The Doctor than any other Philadelphia athlete as I was growing up, his favorite tale being the famous "rock the baby" dunk over Michael Cooper in the regular-season at the now demolished Spectrum. Dr. J was that beloved, that revered and that amazing that even a man who rarely enjoyed the NBA could not help but gush over him.

Naturally, as a baby of 1984, I never really got to see Julius Erving do his thing, and I've forever been angry about that. He retired at the end of the 1986-87 season, when I was just 3 years old, barely old enough to remember anything, let alone remember the exploits of an aging legend. Yet I always imagined what it would have been like to see Dr. J in his prime, routinely scouring the internet and video archives to find footage of him doing his thing. Even the still, silent images amazed this kid from Northeast Philadelphia who dreamed of a time when the Philadelphia 76ers mattered and the entire NBA world was pulling for the good Doctor.

So when I heard that NBA TV was airing a documentary this past Monday night on the most revered and beloved Sixer (and Net) of all time, I set my DVR and made sure to clear my calendar to learn even more about the legend from Long Island. And, well, "The Doctor" surely did not disappoint.

For all the things I heard about Dr. J growing up — the man who brought flight to the NBA, the afro, the style, the class, the athleticism, the dominance, the struggle, the championship season with Moses, the dunks, the free-throw line, the list goes on — turns out I knew very little. I didn't know Dr. J lost his younger brother, whom he made a point to protect growing up, at the age 19. I didn't know Julius Erving was a reluctant star in high school, a kid who was more comfortable fitting in than standing out and taking over. I didn't know Dr. J was a lightly recruited 6'3" guard or how he wound up at UMass. I didn't know the only  place he felt truly comfortable was on the basketball court outside his house in Long Island until he got the encouragement and courage to unleash his talents on all the playground courts. And I didn't know that even his teammates at UMass were unaware of his true dominance until he took his game to legendary Rucker Park and then transformed the sport of basketball in the ABA.

I also didn't know how Dr. J got his nickname. I won't spoil it for those of you who have yet to see "The Doctor," but let's just say it's not exactly the way I envisioned it. It's even better, to a degree.

The doc on the The Doc was extremely entertaining and revealing, showing Dr. J's true emotions in discussing his fallen brother, his fallen son, the tears of joy on his farewell tour when the Nets retired his New York jersey and the humility he shows throughout the entire film. And that humility and class for which Erving has been heralded his entire life is made even more remarkable when you hear what other players, his contemporaries, other legends and the players who came after him, had to say about Dr. J.

There is a scene at Rucker Park with three legends of the blacktop — Richard "Pee Wee" Kirkland, NBA player Tom Hoover and NBA Hall of Famer Nate "Tiny" Archibald — that really kicks off the gushing over Erving … because the three legends themselves had no intention of giving way to Dr. J at the time.

"The first game you got in on this court here and played like a bum, you was a bum. So when Julius Erving came to Rucker, he'd either be known in the basketball world as a great player or he would have probably figured out a way to deal with his books and keep his grades high." — Pee Wee Kirkland

Hoover thought nothing of Dr. J because he was playing for the Knicks at the time. Pee Wee needed Julius to show him. And Tiny was on the way to becoming a Hall of Famer himself. Then Dr. J showed up, and the three streetball legends couldn't believe their eyes. Dr. J was no bum. Far from it. And the bad men who never showed respect without someone earning it couldn't say enough glowing things about The Doctor. 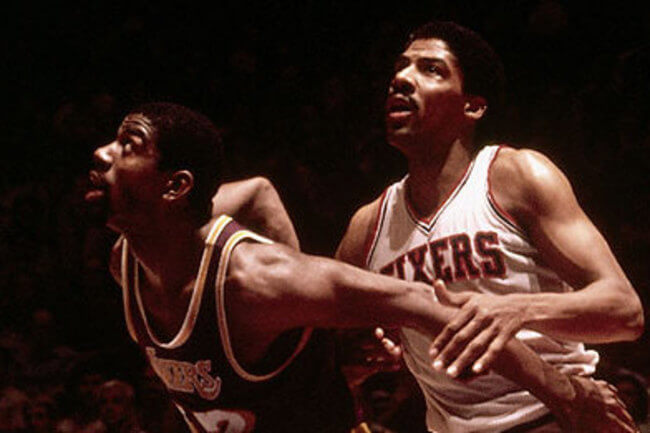 And that was just the beginning. Magic Johnson, who defeated Dr. J's Philadelphia 76ers in the 1980 NBA Finals with Magic winning the MVP, was like a star-struck child talking about Dr. J. Erving was clearly Earvin's idol.

There is Isiah Thomas, alongside Magic, at the beginning of the film sharing his favorite Dr. J story, when he was a kid at camp and saw Dr. J take off from "what to me looked like the top of the key, took flight and stopped in mid-air, saying come on, we in flight now." Isiah, one of the toughest and most stubborn SOBs in NBA history, gushing like a little kid over Dr. J — the same Isiah who showed no mercy and little respect for Michael Jordan some years later. But Dr. J? He was larger than life to Isiah Thomas.

There was Bill Walton, whose 1977 Portland Trail Blazers bested Dr. J's Sixers in the NBA Finals, who even shared his amazement of the Doctor. Walton, who did sound a bit condescending in saying that his Blazers played pure team basketball whereas the Sixers were individuals on the court (true to an extent), still marveled at Dr. J and even relayed when he thought he had Doc lined up for a block … only to get posterized as so many before and after had.

There was Michael paying homage to Julius Erving, calling him his idol. There was LeBron James — who dons Doc's No. 6 — bestowing his appreciation, saying without Dr. J there'd be no MJ, and without MJ there'd be no LeBron. There was Michael Cooper discussing the famous "rock the baby" dunk, saying he thought he finally could get Doc, but realized he couldn't so he just ducked away. And Cooper admitted, "If you're going to get dunked on, might as well get dunked on by the greatest in the game."

There was Pat Riley, who couldn't believe what he saw when Dr. J came into the league, and who couldn't have been happier for an opponent in defeat when Erving finally got his NBA title in 1983. There was Dominique Wilkins, who clearly modeled his own aerial attacks after Dr. J. There was George Gervin, a fellow ABA legend and Hall of Famer, who said he knew he didn't have even a sliver of a chance in the ABA dunk contest with Dr. J participating. There was Dan Issel, whose Denver Nuggets took on Doc's Nets in the ABA Finals, saying Erving was unstoppable, that not even the "greatest defender in NBA history," Bobby Jones (a future Doc teammate on the Sixers), could contain him. And the list goes on.

Bob Costas may have had the line of the film on Doc during the time: "He was the coolest guy in the building, in the ZIP code, in the area code, in the time zone, in the country." Everyone wanted to be like Dr. J, but there was only one Julius "The Doctor" Erving.

For someone who never got to see him firsthand but who heard all about Dr. J and his exploits from his father and so many others in Philadelphia, it had an even greater impact hearing some of the all-time greats, true legends in their own right, praising Dr. J and describing him as not only great, but larger than life. He did things they had quite literally never seen. Pat Williams, who was the GM and architect of the 1983 Sixers and the man who lured Dr. J away from New York and to Philadelphia when the ABA and NBA merged, even said that Dr. J today could do things no other player in the NBA can. That type of hyperbole may seem extreme, but when so many legends themselves, so many greats are bestowing the same type of message, it gets harder to refute. Dr. J had everyone in awe. Everyone.

Add to that the personal struggles Doc has faced, from the loss of his brother to the loss the of his son to the deterioration of his marriage to his financial difficulties, and it makes it even more amazing that Julius Erving has never once slipped from his demeanor as the consummate gentleman.

The documentary isn't necessarily as hard-hitting as some others out there, but "The Doctor" certainly gives a glimpse of the legend of Dr. J to those of us in the younger generations who never got to experience the phenomenon in real time.

But what Dr. J is is an all-time great, and one of the few men in the history of sports to truly change his sport and bring it to new heights. Dr. J made dunking and expression part of basketball, and with it he inspired the legends after him. Without Dr. J, the game of basketball may not be what it is today. He was one of the greatest. He was one of the most revered. And he was, without question, the coolest superstar to ever grace the Earth.

And shit, you'd be a fool to believe The Doctor can't still get up and throw one down, whether we see it in the film or not. If there's one thing we learned, it's that Dr. J can and did do anything imaginable — and some things unimaginable — on the basketball court.

5 Replies to “'The Doctor' Is In: Dr. J For The Younger Generation”