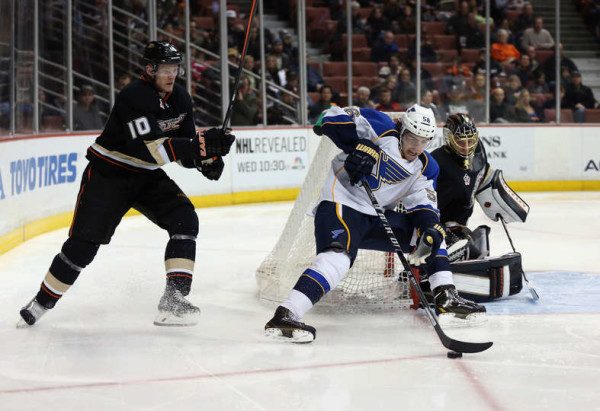 You hear it all the time in NBA chatter, that the Western Conference is so much superior than the Eastern Conference that something should be done to rectify the situation. Never mind that these things are cyclical and dependent more on management than anything else. The West’s supremacy as a whole is accepted as fact.

For those of you paying attention, you might already know that the same is true of the NHL these days. Take one look at the standings and you’ll see that five Western Conference teams have more than 80 points to just two Eastern Conference teams. The Anaheim Ducks pace everyone with a league-best 92, as the St. Louis Blues, Chicago Blackhawks, Colorado Avalanche and San Jose Sharks are all well above the 80-point mark.

Meanwhile, only the Pittsburgh Penguins and Boston Bruins can boast the same on the Eastern side, and the Bruins still do not have more points than any of the Western teams at that mark.

Now, admittedly, the disparity is not as problematic overall. Once you dip below the 80-point mark, things even out between conferences — plus, in hockey, low seeds legitimately have a chance to win the Stanley Cup, whereas the lower seeds in the NBA have virtually no shot. That’s because in hockey, one individual does not have the same effect as in the NBA — not even a goalie, although netminders have been known to steal a series before.

Still, it’s interesting to see that the Western Conference has more of the “dominant” teams in hockey just like it does in the NBA. In the end, that has little bearing on who actually hoists the Stanley Cup, but it’s proof that Western Conference supremacy holds true for the NHL as well.

‘My Job Is Very, Very Different From Your Job’ – The MMQB

What Happened to the 2005 Tar Heels? – Grantland

Big Expectations, or Wang Zhelin Is Almost Ready – The Classical

2 Replies to “Starting Lineups: Western Conference Supremacy Holds For The NHL Too”

Starting Lineups: Western Conference Supremacy Holds For The NHL Too