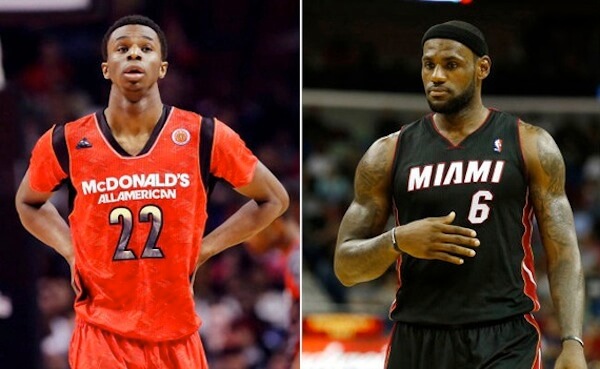 I know we're not even a full month into the 2013-14 NBA season, but it seems like just as much — if not more — of the talk has been about what's going to happen after the season instead of what's actually going on right now.

There's less talk about LeBron James and the Miami Heat three-peating than there is about Andrew Wiggins, Jabari Parker and Julius Randle. There's less discussion about the challengers to Miami's thrown than the teams poised to tank … or those who were supposed to be tanking. There's more talk about the upcoming free agent class than the potential in-season trades.

And while I am as excited to see how this season unfolds as anyone — what in the Sixers!?! — I can't deny the allure of the 2014 NBA offseason.

But of course, before all that, there is the 2014 NBA Draft, which many pundits are hailing as the best draft class since the 2003 LeBron, Melo, Wade, Bosh — and Darko! — et al class. The potential 2014 class is so hyped you know almost all of the draftees by name already: Wiggins, Randle, Parker, Aaron Gordon, Marcus Smart, Andrew Harrison …

It's almost as if this season is just a precursor to the chaos the 2014 NBA offseason is bound to bring — and that seems even more true should the Miami Heat breeze through the competition for a third straight title. While we are still a long way from that and have plenty of contenders standing in Miami's way, if that is to happen, it's almost like a "we've seen this before" scenario. Not that dynasties are unexciting — they're not — but with so much unknown on the horizon come the offseason, it's easy to get distracted.

I know I'll certainly enjoy the 2013-14 NBA season for all it is worth … but like a lot of basketball fans out there, I can't help but look ahead to what the summer of 2014 has in store.

Off The Jock: The Top 12 Rap Lyrics Dissing Athletes - Complex

The Willy Wonka of Pot - Grantland

The problem with the Phillies, in eight of their GM's words - Philly.com

The evolution of Blake Griffin - TrueHoop