Tomorrow night, Terrence Ross will try to defend his NBA Slam Dunk Contest championship against Paul George, John Wall, Harrison Barnes, Damian Lillard and Ben McLemore. Even without LeBron James in the mix, it’s an interesting collection this year that will hopefully result in some memorable moments.

And that’s what the Dunk Contest is all about — imprinting indelible moments in the minds of fans everywhere. Dr. J from the foul line. Twice. Larry Nance topping the favorites. Spud Webb’s hops. Jordan vs. Dominique. Every last thing Vince Carter did. Baby Jordan and Isaiah Rider. Brent Barry proving white men can jump. Kobe’s introduction to the league. Nate Robinson’s 7,000 attempts. Gerald Green blowing out the candle. Blake Griffin jumping over a car.

But the most memorable dunk contest for me didn’t take place on the grandest stage. Instead, the dunk contest that stands out in my mind more than any other was the 2001 McDonald’s All-American Dunk Contest.

It was an amazing display from the two teenagers, and it was even more remarkable to learn they were both heading to play for Billy Donovan. Of course, White wound up transferring to Cincinnati and never really got the chance to team up with the guy who edged him at the McDonald’s All-American exhibition.

Every so often, I’ll go back and watch some of these dunks and still marvel at them, some 13 years later.

The Rise of Swaggy P – SLAM

How Cleveland lost its way, and lost a chance at LeBron’s return – Yahoo Sports

Can Women’s Pro Soccer Work In America? An Investigation, In Sweden – Deadspin

3 Replies to “Starting Lineups: When David Lee And James White Threw Down”

Starting Lineups: When David Lee And James White Threw Down 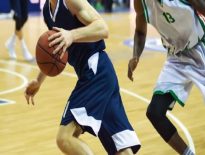 Basketball Taking It Back: Scottie Pippen Rises At The 1994 N…
3