In annals of Major League Baseball history, 2013 will forever be remembered as the final chapter in the brilliant career of surefire, first-ballot Hall of Fame closer Mariano Rivera. But Mo isn’t he only one hanging up the cleats this year.

Just a couple days ago, two of the greatest hitters of the late 1990s and 2000s officially decided to call it a career themselves, as the free-swinging, fearless Vladimir Guerrero and the understated, calculated Todd Helton announced their retirement mere hours apart. I’m not here to break down their Hall of Fame chances — in fact, Matt Whitener has already done that for Helton — though I do think both players deserve a plaque in Cooperstown. I’m here to appreciate the greatness of these contrasting titans.

On the surface, the two couldn’t be more different. Guerrero was a raw talent out of the Dominican Republic who played north of border for the Montreal Expos and spoke little English, whereas Helton was the All-American boy, a star in both football and baseball (everyone knows about his days as the backup QB for the Tennessee Volunteers) who lived the All-American life. Then there was their styles of play — Guerrero pure aggression and power, Helton a patient hitter with a great eye and calculated approach at the dish.

But the two did have one rare connection, which I call the Larry Walker effect. Walker, a great rightfielder in his own right, was the last great Montreal outfielder before Guerrero — and then Walker continued his great career out in Colorado, joining forces with a young Todd Helton to give the Rockies an unparalleled one-two lefthanded-hitting punch.

But beyond the Walker connection and the all-star talent, the two were remarkably different. Guerrero electrified the game the moment of his call-up in 1996, displaying one of the most potent rightfield arms baseball has ever seen, the galloping speed of a deer, power and aggressiveness. And with Vlad, you were never quite sure what you’d see. He never saw a pitch he didn’t like, never missed a chance to show off his arm to reminder base-runners what was in store, and he never changed his approach — and that’s what made him so great. In fact, I distinctly remember Curt Schilling once responding that Vlad was the toughest batter he ever faced because he swung at everything and rarely missed, so Schilling never knew where to pitch him to get him out. Conversely, Helton was great because was the opposite of Guerrero at the dish. He worked counts — still does — took walks and pounced on a pitcher’s mistake. He was the definition of a professional hitter, the type of guy who would routinely hit over .320 while mashing 30 home runs and driving in 100 RBI. Oh, he was also a slick, Gold Glove fielder at first, a guy who could pick it with the best of them and make a difference on defense.

Being a lifelong Philadelphia Phillies fan, I had the pleasure of watching a young Vlad on a regular basis, the Expos being a division rival and all. And every time I saw him, I was mesmerized. He was quite literally great at everything, if a little undisciplined at times. And I recall the heated race between him and Scott Rolen for the NL Rookie of Year in 1997, which Rolen ultimately took home.

He could hit a pitch in the dirt or over his head out of the ballpark, overthrow a rocket to third or gun a runner out the plate, and it was chaos in the best way to watch. He won an MVP and lots of games as an Angel, where knee problems slowed him down, but I’ll forever remember the speed and power and joy of watching a young Vlad in Montreal.

And being a fan of an NL team, I saw plenty of Helton too. Watching him was a pure joy from an appreciation of the game standpoint. Helton simply never got himself out, never made mistakes. He always seemed to have the right approach and go at his own pace. Where Vlad looked to always be going for the home run, so to speak, Helton went for the best possible odds, and there’s no better player to emulate than Todd Helton.

So while 2013 may be Mariano Rivera’s farewell tour, make sure you all take the time to remember and appreciate Vladimir Guerrero and Todd Helton for the greatness both displayed. Now on to your Wednesday reading material.

Put Chris Webber in the Hall of Fame – Grantland

Does Andy Reid still wish he was in Philadelphia? Jamaal Charles apparently thinks so – Shutdown Corner

Every Air Jordan Commercial In One Video! – Hoopmixtape.com

2 Replies to “Starting Lineups: Appreciating The Greatness Of Vladimir Guerrero And Todd Helton” 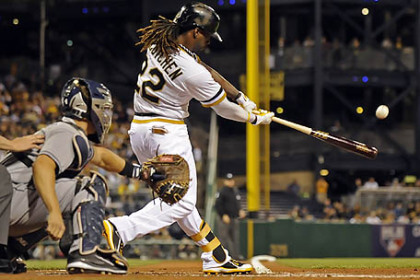 A Sports Scribe Get Excited America: Baseball’s Middle And T…
Baseball Honoring A Hated Rival: The Uncomfortable Case Of …
2