Sports encapsulate one of the rare instances in life in which hate is not only accepted, but encouraged. That doesn't mean violence. It simply means that competition and rooting interests enable an accepted form of hatred, whether it is hating certain teams, certain players, certain coaches, certain officials, certain agents, certain mascots or whatever.

Over the years, I've cultivated a whole lot of hate in my sports consumption. However, one thing I've noticed as I've gotten older and wiser and perhaps more rational and less emotional is that I find myself hating a lot less — at least in regard to specific players. For instance, I used to hate Kobe Bryant. Now, the older I get, the more I appreciate his game and enjoy watching him play. There are any number of circumstances like that I can lay out. For whatever reason, the hate has dissipated in some aspects of my sports fandom.

My hatred of all things Dallas Cowboys is not one of those things. This season in particular, I've noticed just how passionate my hate for the Cowboys continues to be. Where I used to rant and rave and yell and scream and throw things around while watching a game as a teen and young adult, those actions have greatly subsided the past five or six years. I'm much more calm when watching games, rarely yelling or screaming and almost never throwing and/or breaking anything. I may vent on Twitter, but I won't go berserk.

Well, on Thanksgiving, I found myself jumping out of my seat, cheering loudly and doing many of the things I used to while watching the Eagles dominate the Cowboys. I was anything but calm, even in a sound victory for my squad, because I hate the Cowboys that much.

Sunday night, that hatred only intensified. Earlier in the week, my buddy asked if I'd be interested in his Eagles-Cowboys tickets should he not be able to make it. I of course said yes, and on Sunday morning, he informed me that the tickets to the big-time Sunday night matchup between NFC East rivals for sole possession of first place in the division were mine. So I headed down with my friend Josh, and the moment we hit the subway platform and saw the random Cowboys gear in a sea of green, my hatred was turned up to 11.

That feeling only intensified as I entered the stadium and saw the pathetic, sorry excuses for fans who jumped on the bandwagon in the early 1990s donning that despicable star with those despicable colors. Every person I saw wearing Cowboys colors made me despise that person with indescribable intensity. And when I saw the Cowboys take that damn field in front me, I wanted nothing but to see bad things happen to each and every player, every single person flaunting that ugly-ass star. 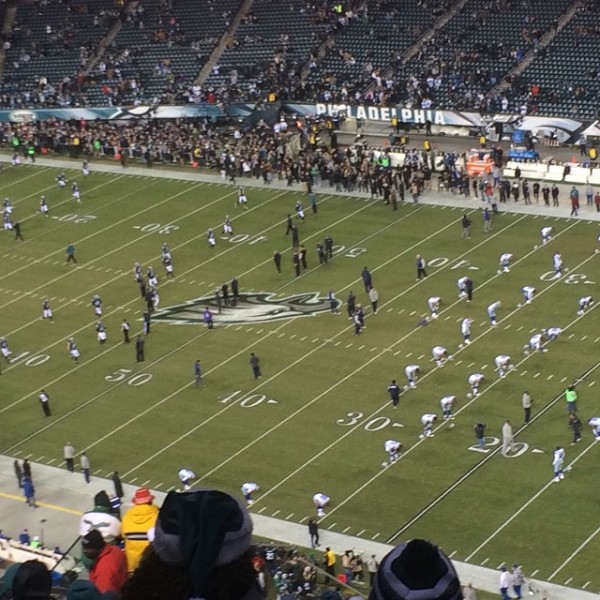 That feeling of hatred never subsided. I hate Dez Bryant for being so good and so cocky and so god damn talkative. I hate Tony Romo and his stupid slipperiness. I hate Jason Witten and his sustained excellence. I hate that line that gets away with holding on every play, that defense that should be Swiss cheese, that stupid red-headed coach, that leather-faced owner. Everything. I hate it all.

The sight of the Dallas Cowboys makes me sick. And it increases tenfold when those very Cowboys are mopping the floor with the Eagles.

Speaking of the Eagles, my hatred in this rivalry is not only reserved for the team I abhor. There's also plenty of hatred to go around for players on my own favorite team … and the annoying, stupid fans that support the Eagles. I hate Cary Williams and every stupid penalty he takes. I hate Bradley Fletcher and every bad technique he employs. I hate Mark Sanchez and his inability to hit an open receiver. I hate that Lane Johnson is nowhere near as good in year two as he was in year one after being suspended for banned substances. I hate Brad Smith and his stupidity on that opening kickoff. I hate Nate Allen for not being Earl Thomas, and I hate Brandon Graham even more for not being Earl Thomas, even though the fact that Thomas is not an Eagle is no fault of theirs.

I hate Casey Matthews and his slow ass. I hate Josh Huff's penchant for mistakes. I hate that Chip Kelly has only one speed all the damn time — though I admittedly love Chip Kelly, the coach. I hate dropped balls, like the key one rookie Jordan Matthews had, and I hate turnovers, which have become the modus operandi of the Eagles.

And I hated everything about that game Sunday night. I hated the drunk, 20-something sitting next to me who spent more time taking selfies and recording himself talking trash on Dallas than actually watching the game. I hated the way he tried to engage me in conversation, as if I was in any mood to banter with anyone, let alone some drunk asshole obsessed with selfies. I hated the stupid woman who screamed at the top of her lungs on every big Dallas play. I hated the opening kickoff that looked more like pee wee football than the professional ranks. I hated the officials who saw fit to throw flag after flag after flag, especially that one referee who threw a god damn flag 15 seconds after a play had ended and the teams were huddling.

I hated being at that game, hated being in that stadium to watch the Eagles get outclassed and fail to even show up for the first quarter at all.

And I hated seeing the Cowboys, just like I always do. It was a miserable experience, one that saw me yelling at the top of my lungs, cursing out players, kicking the living shit out of the seat in front of me after yet another penalty, and genuinely telling everyone around me and every Eagle on that football field to fuck off.

People usually get calmer and more level-headed the more they're on this Earth. I have in many aspects of my life, including parts of my sports fandom and consumption. But it's clear more than ever that I will always have this deep-rooted, passionate hate for the Dallas Cowboys. I hate everything about them, and I hate the way in which they thoroughly undressed the Eagles in that 38-27 final Sunday night.

My late grandfather always said he had two favorite teams: the Eagles and whoever was playing the Cowboys. I inherited that hate, and it is something that I am certain will never, ever die. I want for nothing more than to see the Eagles succeed, but a close second is to see the Cowboys fail. That's how much I hate them. And next weekend, I'll be rooting for the Indianapolis Colts just as much as I'll be rooting for the Eagles. The hate is real, and it as much a part of my fandom as pulling for the Philadelphia Eagles.

3 Replies to “Shock The World Chronicles: Eagles Vs. Cowboys And Embracing The Hate”