Roughly 15 minutes before kickoff, Gary, a lifelong, diehard Philadelphia Eagles fan, a man who's missed a grand total of five home Eagles games in 53 years as a season ticket holder, came over and said, "Is there any place you'd rather be?"

At that moment, the answer was a resounding no. It was a beautiful, sunny, hot day in Philadelphia, with young women wearing shorts with their asses hanging out, and there I was at Lincoln Financial Field, a belly full of steak and lobster and alcohol from an epic tailgate, ready to take in the season opener between the Philadelphia Eagles and the Jacksonville Jaguars. Given Philadelphia's somewhat surprising success in year one under head coach Chip Kelly and Jacksonville's penchant for being, well, Jacksonville, this was sure to be a stress-free day and an assured 1-0 start for the Eagles.

Thirty minutes of game action later and I was a miserable human being. Beyond miserable. And truth be told, sweaty and angry and ranting, I would have much rather been somewhere else. Anywhere else. Preferably at my home on my couch, watching what could actually be called competent football instead of this drivel that had unfolded before my eyes.

Somehow, someway the Eagles trailed the lowly Jaguars 17-0 at halftime — a score that could have easily been much, much worse.

And the most frustrating and frankly disturbing part was that the 17-0 deficit was largely due to the laughably horrid play of Philadelphia quarterback Nick Foles.

Last season, Foles lived a charmed life. After taking over for an injured Michael Vick, Foles went out and had one of the greatest seasons in franchise history, tossing 27 touchdowns to just two interceptions, making the Pro Bowl, and leading the Eagles to an NFC East Division Title. He had cemented himself as the starter and, in many eyes, as a franchise quarterback. Surely, even if he was to come back down to earth a bit in 2014, it wouldn't be in this game. Not against this team with this track record.

Yet there the Eagles were, trailing 17-0 thanks to three turnovers by Foles in just over a quarter's worth of time — this after turning the ball over a grand total of four times all of 2013. On the first drive of the game, Foles held on to the ball as if he were playing by school-yard rules — you know, with the pass rushers having to count to 10 Mississippi before actually being allowed to attack the QB — and fumbled as he was getting sacked. Following a touchdown pass by Chad Henne to someone named Allen Hurns, Foles again refused to throw the football, holding on and holding on and holding on, and again he got hit and fumbled. For the second straight time, the Jags recovered, and once more Henne hit Hurns to put the Jacksonville up 14-0.

Two drives, two fumbles by Foles to go along with a complete and utter refusal to get rid of the ball. To put that into perspective, Foles lost two fumbles all last season — it took him all of two drives to equal that feat in 2014.

Things did not get any better from there. When Foles actually did decide to stop holding on to the ball and pump-faking to oblivion, he was off-target, often badly so. He missed many wide open receivers, notably a wide open Jordan Matthews, failed to see the field and looked like a deer caught in headlines. Suddenly, a guy who was the surprise of the league one year before looked as if he had never played a down of football in his life.

He only exacerbated things when he threw an inexcusable interception on first and goal from the Jacksonville 5-yard line. It was a pathetic display of quarterbacking, one that had me and about 70,000 of my friends calling for Mark Sanchez, of all people, to save the day. After all, Sanchez had played some of the best football of his career in the preseason, and Foles was struggling mightily. But there would be no Sanchez on this day.

Following the pick, the Jags added a field goal to go up 17-0. Whereas Foles looked clueless, the unheralded Henne looked on-target. He was connecting with his receivers and most importantly getting the ball out of his hands and out of danger. It was like we were in a bizarro world. And I was fuming.

Meanwhile, nothing was working for the Birds. Foles was hopeless, and the ground game was doing him no favors. A lot of that had to do with the Jacksonville defense, namely middle linebacker Paul Posluszny, who seemed to be in on every tackle. Now, without a doubt, I am biased when it comes to Posluszny, seeing as I was at Penn State the same time he was and loved watching him dominate the Big Ten. But man, he is so incredibly good. Not only was he flying all over the field, but he also simply did not miss a tackle. Whether it was LeSean McCoy or Darren Sproles bearing down on him, it didn't matter — he wrapped them up and brought them down. That guy is fun as hell to watch and probably one of the most underrated linebackers in the NFL. He certainly is a better tackler than anyone on the Eagles roster, that's for sure.

As for the game, I was ready to proclaim Foles a one-year wonder and wanted desperately to see Sanchez take over — not for good, but as a wake-up call to the third-year signal caller. Lucky for the Eagles of their fellow fans, Chip Kelly is the man in charge, and not us. 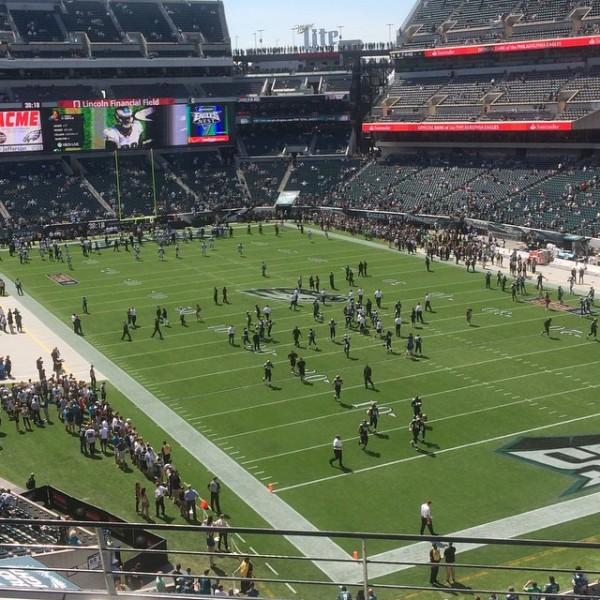 After struggling still a bit to open the third quarter, Foles and the offense finally got on track. One score was all it really took to get the crowd back into it, and the defense, who had done everything in its power to keep the Eagles in it at all in the first half, shut down the Jags the rest of the way. New addition Darren Sproles was a shot of adrenaline, Zach Ertz flashed the potential that has many proclaiming a breakout season for the second-year tight end and Jeremy Maclin was left completely uncovered for a long touchdown.

Furthermore, the defense was outstanding all game long. Yes, the Jags did put up 17 in the first half, but all 17 came off turnovers. From there on out, the defense shut things down. Most promising of all on that side of the ball, Brandon Graham, the man who forever will be known as the player the Eagles drafted instead of All-Pro Seattle Seahawks safety Earl Thomas, was a beast on Sunday. He was all over the place, wreaking havoc and causing problems for the Jags all day. In fact, the entire front seven was very impressive, with Fletcher Cox, Bennie Logan and company blowing up the Jacksonville line and stuffing any attempts from Toby Gehart.

Then there was the special teams, an area that was not always great for the Eagles in 2014 with the exception of punter Donnie Jones. Well, Jones was awesome again just as he was last season, pinning Jacksonsville inside the 20 time and time again, and new kicker Cody Parkey proved he was the right choice, at least for one week, over Alex Henery. Parkey not only drove the ball deep on kickoffs, but he was 2-for-2 on field goals, including a 51-yarder — something Henery struggled with mightily the past two years.

By the time the fourth quarter rolled around, order had been restored. The Eagles scored 34 unanswered second-half points, and the Jaguars proved they are exactly who we thought they were. But for one half, the football world was turned on its head, with the Jaguars thoroughly outclassing the Eagles and Chad Henne besting Nick Foles by a wide margin.

Thankfully, the game is 60 minutes long and not 30. Otherwise, I would have been even more miserable and more hot under that scorching Philadelphia sun, and chances are I'd be throwing around a whole lot of expletives in this post the way I was during that first half of football.

But you know what? Gary was right. Win, lose or draw, there was nowhere I'd rather have been on Sunday than inside sunny Lincoln Financial Field, because there's nothing quite like taking in a live football game, especially on opening weekend in the NFL.

11 Replies to “Shock The World Chronicles: Nick Foles And His 2 Faces”