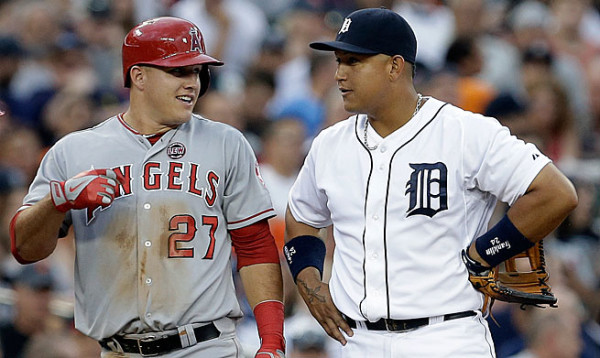 The 2014 MLB All-Stars have officially been announced, so it's that time of year where Matt Whitener and I go over the men who actually should be starting in the midsummer classic.

I have to admit, with the advent of online voting and the explosion of fantasy sports, the voting public is much more well-informed and, frankly, much better at voting in the deserving players. But that doesn't mean the process is perfect.

So without further ado, here are my 2014 MLB All-Star game starters. Stay tuned for Matt's team tomorrow, followed by a clash of wits for Thursday.

1B: Paul Goldschmidt, Arizona Diamondbacks — This one was a no-brainer for the fans. While Goldschmidt is on a horrid Arizona squad, it's no fault of his own. He leads all MLB first-baggers in runs, hits, WAR and doubles, while leading all NL first basemen in OPS, slugging and walks. A resurgent Justin Morneau has an argument, but really, it's hard to overlook Goldschmidt here.

SS: Troy Tulowitzki, Colorado Rockies — The man they call Tulo is simply the best in business when it comes to the No. 6 position. He leads the Majors in batting average, runs, on-base percentage, OPS and WAR, while trailing only Chicago White Sox phenom Jose Abreu in slugging. On top of that, he leads all shortstops in hits, home runs and walks as well. Oh, and he ain't too shabby with the leather either, boasting the highest fielding percentage among shorstops. The fans got this one right.

OF: Andrew McCutchen, Pittsburgh Pirates — The reigning NL MVP is simply up to his old tricks, leading all Major League outfielders in average and on-base percentage, while leading NL outfielders in walks and hits.

OF: Yasiel Puig, Los Angeles Dodgers — Last year, there were many who felt Puig deserved an all-star nod despite being in the majors for just a short while. This year there really is no question. With a stat line of a .307 average, 12 home runs, 50 RBI, .516 slugging and .908 OPS, all five of his tools have been on full display. There is no debate any longer.

1B: Miguel Cabrera, Detroit Tigers — I'm just going to go ahead and let Matt do the talking here with his words last week: "While Jose Abreu is making a historic home run debut, Miggy continues to be the game’s finest all-around tool at the dish and is on pace to drive in 130 runs and push at 200 hits yet again."

3B: Josh Donaldson, Oakland Athletics — Everything in my being is telling me that a guy with pedestrian numbers in average, on-base, slugging and OPS should not be starting, particularly with a talent like Adrian Beltre around, but Donaldson leads all third basemen in home runs and RBI, while playing otherworldly defense for the MLB-leading Oakland A's. If his defense wasn't providing him with the best defensive WAR at the position, he may not be starter-worthy … but it is, so he is.

OF: Mike Trout, Los Angeles Angles — He's the best all-around player in baseball, period. We could name all his stats, but all you really need to know is that he's literally awesome at everything. OK, he does lead the Majors in OPS and slugging, and he's among the league leaders in damn near everything. The guy is at the top of the game at the ripe old age of 22.

OF: Jose Bautista, Toronto Blue Jays — Bautista is basically the AL version of Giancarlo Stanton, a slugger who swings for the fences and connects with the best of them. He, along with fellow basher Edwin Encarnacion, is why the Jays are neck and neck with the Baltimore Orioles for tops in the AL East.

The 'Should Be Starters'

C: Jonathan Lucroy, Milwaukee Brewers — It's no surprise to see Yadier Molina named as the NL's starting catcher. He is the most accomplished backstop in the game today, the most consistently impressive defensive catcher and a bona-fide offensive threat. Plus, he's having a wonderful season. But Jonathan Lucroy deserves the nod, putting together a fantastic first half as the man behind the plate for the NL-leading Brewers. Lucroy leads all catchers in games, at-bats, runs, hits (by a ton), doubles (by a lot), walks, steals, average, on-base, slugging, WAR and OPS. He's also second in RBI with nine home runs, in addition to playing some fantastic defense. This spot belongs to Lucroy.

2B: Daniel Murphy, New York Mets — A month ago, this spot rightfully belonged to Chase Utley, the man the fans voted in. But for the past month, Utley has fallen off a cliff, while New York's Daniel Murphy has surpassed him in nearly every category. Murphy leads all NL second basemen in runs and hits while besting Utley in steals and average. Utley is a fine choice, but with the Phillies sitting squarely in last and Utley fading of late, my nod goes to Murphy.

3B: Todd Frazier, Cincinnati Reds — I love Aramis Ramirez as a player. I really do. For years, I used to make it a point to nab him on my fantasy team. But this is the one glaring error by the fans, because there are more than one third basemen who deserve the nod over the Milwaukee third baseman. My pick is Cincy's Todd Frazier, who leads NL third basemen in home runs, OPS, slugging and steals, while keeping pace with other worthy candidates Casey McGehee and Matt Carpenter in the other offensive categories.

OF: Giancarlo Stanton, Florida Marlins — While Carlos Gomez has been a revelation since heading to Milwaukee, the fact that he's starting over Stanton is a travesty. Not only does the Florida right fielder lead the NL in home runs, RBI and runs, but Stanton has become must-watch television every time he steps into the box. The man formerly known as Mike hits the most majestic dingers in baseball, and this year with his average over .300 and his on-base over .400, he's taken his game another level.

C: Salvador Perez, Kansas City Royals — Matt Wieters was voted in as the starter. Matt Wieters played 26 games before going down for the season. This is a case of the fans being morons. KC's backstop deserves the nod as the most well-rounded catcher in the AL. He leads AL catchers in OPS, slugging, hits, games and at-bats, and is second in runs, doubles, homers, average and on-base.

2B: Ian Kinsler, Detroit Tigers — This is one of the toughest calls in baseball. Robinson Cano is batting .320 and doing his thing in Seattle, and Jose Altuve is leading all second basemen in batting average, doubles and hits, but I'm going with Kinsler, whose presence has helped Detroit to the second-best record in the NL. Kinsler is in the top two in runs, hits, doubles, home runs, RBI, OPS, and slugging, which he leads in, among second basemen, and his .308 average is up there.

OF: Michael Brantley, Cleveland Indians — I understand the fans voting in Adam Jones. He leads all outfielders in hits and is the best player on the AL East-leading Orioles. But in my opinion, Michael Brantley has been more well-rounded all season long, posting more runs, doubles, RBI and steals than Jones, not mention a better average (leading all AL outfielders), on-base, slugging and OPS. 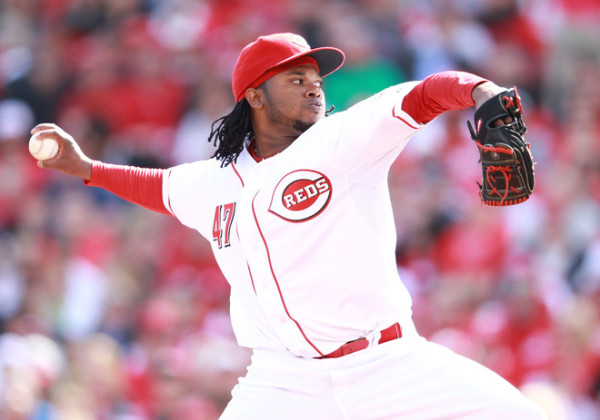 NL: Johnny Cueto, Cincinnati Reds — A MLB best .176 batting average against and 0.87 WHIP combined with two shutouts, 130 strikeouts and 1.99 ERA make Cueto the guy, no question about it.

AL: Felix Hernandez, Seattle Mariners — Masahiro Tanaka has been getting all the love with his MLB-leading 12 wins, and he is a fine choice to start. But King Felix is at his best yet again, leading all AL starters in ERA and WHIP, while sitting at second in batting average against, strikeouts and innings pitched. He's still damn good.