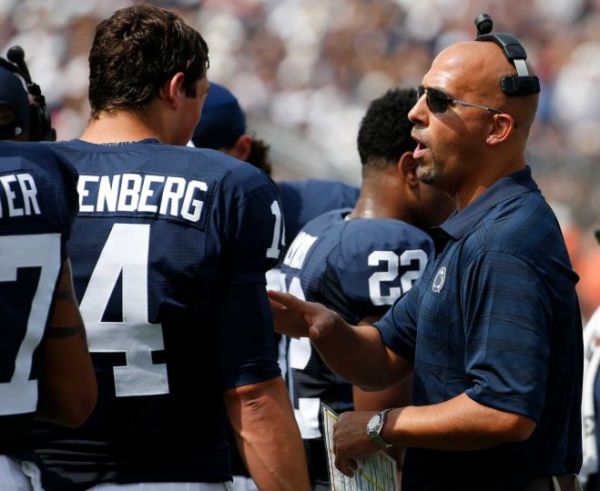 Three years ago, a scandal of unthinkable proportions and heinous crimes was unearthed. It involved a former football coach and had ties with the legendary coach and the athletic department, which in turn made it seem as if it was a football issue.

The most difficult part for many people to realize was that the Jerry Sandusky scandal had virtually nothing to do with football. It was not an NCAA issue, seeing as no NCAA violations occurred. This was a criminal issue from start to finish, a sick man committing unthinkable crimes and a small group of high-powered university officials failing to provide information to the police in a proper manner. It didn't involve student athletes or competitive advantage — it involved crimes from grown men who should have known better.

At the end of the day, the NCAA did what it always does, punishing the innocent for the wrongs of others. The Penn State football program was hit with unprecedented sanctions that included a four-year postseason ban, scholarship reductions and an unheard of fine. All this despite no actual NCAA rules being broken and no actual NCAA investigation taking place.

Well, Monday, the NCAA lifted Penn State's postseason ban effective immediately, meaning the Nittany Lions are bowl-eligible this season should they qualify, and the school will have its full number of scholarships restored next season. Penn State still must pay the $60 million fine, but at least now the players and coaches who weren't even on campus at the time the news broke will no longer be punished. For once, the NCAA has done the right thing.

Now I'm sure there will be folks coming here saying I'm an apologist and pro-crime, which if you've read anything I've written on the subject or actually know me or have taken the time to talk to me on the subject know is completely and utterly false. In fact, I never even wrote a single thing against the sanctions since they were imposed, namely because this whole thing was bigger than anything I had ever come across in my life. Legacies were rightfully tarnished and memories besmirched, and I don't think there's any reason to go back and try to alter the timeline of events.

What I'm most hopeful for is that this sets a new precedent for the NCAA. This greedy, corrupt organization has been bumbling over itself for far too long, meting out punishments that punish the innocent much more than the guilty. This reversal, however long it may have taken, is a step in the right direction and gives hope that maybe, just maybe the NCAA will look at better solutions and more appropriate punishments for individuals and/or institutions that do wrong without making those not responsible pay.

On a personal level, the news made me smile. As a graduate and lifelong Penn State fan, I have a lot of love for my university and the students who make up the campus I still love to visit and support. It makes me feel good that a talented young signal caller like Christian Hackenberg and his Penn State teammates will get a chance to compete on a level playing field again, get the chance to play postseason football for an experience that only happens in college football. The new coaching staff really does get to start fresh now, and Penn State can try to return to a state of normalcy, albeit one that now must acknowledge that football is not even close to the most important thing in life.

Over the past three years, I've seen the healing firsthand and experienced it as a alumnus. This is another step in the healing process for us all.

No, we will never forget what happened and never should. There are important life lessons we all learned about crime and punishment and power and the dangers of insulation. We can never allow something like this to happen again, and we must always remember the victims and their families and show them nothing but support and offer our prayers.

But it's also important to remember that this was not the fault of football fandom or getting a little too crazy over fall Saturdays. This was always about criminal acts from men who broke the law — men who have been punished or are no longer with us.

I'm glad the NCAA finally realized that, and I hope the NCAA continues to learn that it's always a losing battle to punish the innocent for the crimes of a few delusional people.

2 Replies to “Penn State, The NCAA … And Justice For All”