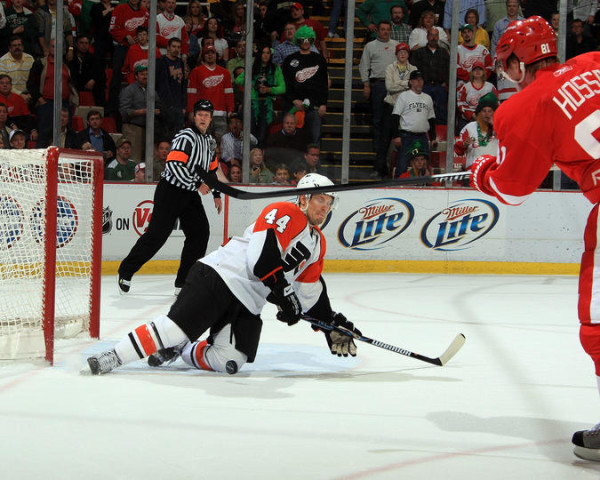 When the Philadelphia Flyers' late-game comeback attempt came up short in Game 7 of the 2014 NHL Stanley Cup Finals first-round playoff match-up against the rival New York Rangers, Kimmo Timonen was there. He was older and slower and less effective than he has been over the course of his quietly brilliant career, but he was there, just like he always has been.

Drafted in the 10th round of the 1993 NHL Draft, Timonen didn't make his NHL debut until the 1998-99 season. As a fresh-faced 23-year-old, the young defenseman became one of the original Nashville Predators, playing in 50 games as a rookie and 51 his sophomore season. Before long, he became the backbone of an innocuous team, the quiet leader on a squad no one paid any attention to. He rose to all-star status — and continued to play at that remarkable level for years in anonymity.

Not until he headed to hockey-crazed Philadelphia did Timonen get the national recognition his play deserved, but even then, he was always overshadowed by his contemporaries, whether it be the flashier young guns like Mike Green or the indisputably great veterans such as Nicklas Lidstrom, Zdeno Chara and eventual Philadelphia teammate Chris Pronger.

All the while, whether skating for the adoring fans in Philadelphia or toiling away unnoticed in Nashville, Timonen was there. He was always there. From the start of his third season in the NHL up until this past season in Philadelphia — Timonen's 15th year in the league — Timonen played in a remarkable 991 of a possible 1,032 regular-season games, an astounding 96 percent of contests. Add in the fact that he's laced them up in 87 of a possible 91 playoff games, and Kimmo Timonen has been one of the most durable athletes of his generation.

When you take into consideration he averaged nearly 22 and half minutes of ice time a night for his career, we're dealing with one of the most fit and productive players to ever man the blue line.

When the Predators made their first playoff appearance in franchise history, Timonen was there, leading all Nashville skaters in average ice time both in the regular season and postseason. When the Flyers went from the worst season in franchise history to a trip to the Eastern Conference Final one year later, Timonen was there, doing the same in Philadelphia as he did in Nashville, leading the charge and the turnaround as Philadelphia's ice-time leader in both the regular season and playoffs, his first season donning the orange and black. 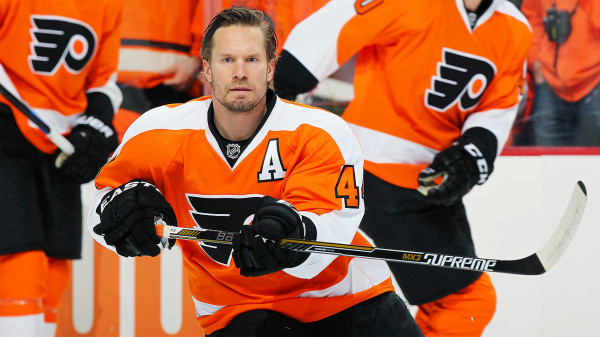 When the Flyers made a surprising run to the Stanley Cup Final in 2010, there was Kimmo playing more than any other skater not named Chris Pronger in the postseason. And there he was even last season, still logging the minutes and skating more than all but two Flyers (Braydon Coburn and Andrew MacDonald) in Philadelphia's seven-game opening-round loss this past spring.

Simply put, there has been no more reliable player out there. Kimmo Timonen has always been there and always been effective, even as Father Time began to catch up with him. In addition to his six all-star seasons, Timonen has been a model of consistency. After playing on many subpar teams in Nashville, Kimmo, despite going against the opposition's top line on a nightly basis, finished as a minus just once during his Philadelphia tenure. He surpassed the 40-point plateau eight times in his career, including seven straight seasons at that mark during which he reached 50 points one season and a career-high 55 points the next. He had at least 30 points seven more times and stands at 571 points in his career, good for 40th all time among NHL defensemen.

And while he was never the physical force of a Pronger or Chara and never the offensive talent of a Green or Lidstrom — or more recently Duncan Keith, Shea Weber and Drew Doughty — Timonen was always out there shutting down the opposition. His intellect allowed him make very few mistakes, rarely giving the puck away. His positioning was nearly flawless, taking the man, playing the puck, blocking shots and quarterbacking the break. And once again, he was always there, manning the point on the power play, killing penalties with the first unit, and rolling out each and every shift against the opposing top threats.

This fall, there's a more than likely chance that, for the first time in a decade and a half, Kimmo Timonen won't be there. Now 39 and already in the twilight of his hockey career, blood cots were found in Timonen's leg and lungs. With rumors of his retirement looming the past two offseasons before he ultimately re-signed for one more year each time, it finally may be time. The Flyers certainly aren't banking on his services, bringing in Michael Del Zotto as some blue line insurance.

If this is the way Kimmo Timonen goes out, it would be fitting — a quiet end to a quietly brilliant career, overshadowed by bigger names and bigger bodies, yet his presence, or lack thereof, felt deeply by his teammates and fans nonetheless.

Fitting or not, come October, it will be a strange sight indeed to take a look out to the ice and not see that familiar, reliable 44 sweater out there. Because for 15 years, through age and injury and lockouts and rule changes, Kimmo Timonen has been there. He's always been there.

Let's hope none of us who were privileged enough to watch him forget that when the time finally comes that he is no longer there.

3 Replies to “Overlooked But Always There: The Quiet Brilliance Of Kimmo Timonen”