While it was Ezekiel Elliott who stole the show for the national champion Ohio State Buckeyes in the first ever college football playoff, the talk of the town centered around red-shirt sophomore quarterback Cardale Jones going from third-string to 3-0 in postseason play.

There's been so much hype surrounding the one they call 12-Gauge for his brilliance in the Big Ten championship game and two playoff victories that it's easy to forget that the 6-foot-five, 250-pound, rocket-armed QB wasn't even supposed to be here in the first place. He was, after all, the third choice.

Heading into summer camp, the Buckeyes were without question favorites to make the first ever college football playoff and one of the teams most likely to win it all. Coming off a 12-win season, Ohio State was poised to run through the Big Ten behind Urban Meyer and his star senior quarterback Braxton Miller.

Let's not forget that it was Miller who orchestrated that perfect 12-0 season in Meyer's first year at the helm and Miller who ran the offense last season for the Buckeyes. And that success for Ohio Stat was largely due to the play of the quarterback, who won the B1G Freshman of the Year award one season before Urban came to town, then finished fifth in the Heisman voting during that 12-0 campaign, a season that saw him win the Big Ten QB of the Year and B1G Offensive Player of the Year awards. He followed that up with the same accolades last year and was one of the odds-on favorites to win the Heisman in 2014.

That is until Miller injured his right shoulder in summer practice and was declared out for the year. Now, with one year left of eligibility, Miller's future is in question.

Why? Well, before anyone really knew much about Cardale Jones, there was J.T. Barrett. With Miller sidelined, the reins were passed on to the red-shirt freshman from Texas.

All Barrett did is go out and play the exact type of football people expected from Miller. Outside of a wretched game in Ohio State's lone loss to Virginia Tech, Barrett was every bit as brilliant this season as Miller has been the past three for the Buckeyes. In the 12 games he started, Barrett racked up nearly 3,000 yards passing, more than 1,100 yards rushing and completed nearly 65% of his passes while throwing 34 touchdowns to just 10 interceptions. In short, J.T. Barrett played Heisman-level football.

Then, just as it had to Miller in the summer, the injury bug bit Barrett against OSU's most hated rival. In the Buckeyes' 42-28 victory over Michigan, Barrett broke his ankle, ending his red-shirt freshman year in the final game of the regular season.

At that point, particularly with the 11-1 Buckeyes on the outside looking in for the college football playoff rankings, any real chance at a national title for Urban Meyer and his team looked slim.

In his first start, which just so happened to be the Big Ten title game, Jones threw three touchdowns as he helped lead Ohio State to a 59-0 thrashing over Heisman Trophy finalist Melvin Gordan and the Wisconsin Badgers that was so thoroughly dominant it got the Buckeyes into the playoff.

His second career start came against Alabama and its defensive-minded coach Nick Saban. Facing the vaunted SEC power, all Jones did is throw for 243 yards, a touchdown and add 89 more yards on the ground as Ohio State, thanks to Elliott's second straight 200-yard-plus game on the ground, toppled the Tide 42-35.

Monday night, Jones just kept on rolling. He put up another 242 yards in the air along with another passing touchdown as well as 67 yards on the ground and another score, riding Elliott once more with his third straight 200-plus-yard game to rout the Ducks, taking home the national title with the 42-20 win. 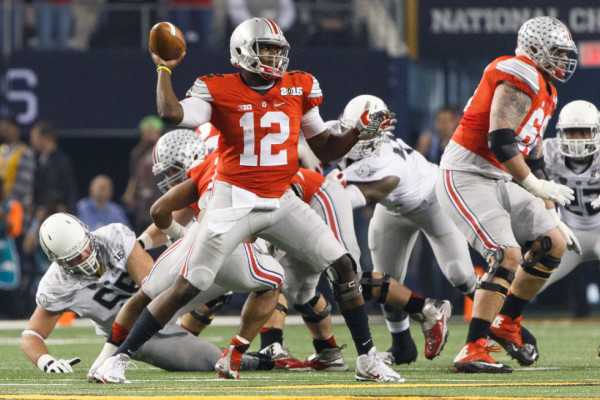 All told, Cardale Jones threw for 860 yards with seven touchdowns and just two interceptions on the season, adding another 403 yards rushing. Oh, and he managed to go 3-0 in his three starts, which just so happened to be three postseason games. Not bad for a young signal-caller, huh? Just a Big Ten title game victory, Sugar Bowl victory and national title game victory in his first three career starts. Not too shabby.

And that leaves us where we are today. This is, unquestionably, a tremendous problem for Urban Meyer to have, but it makes the question no less polarizing. What do these three ridiculously talented quarterbacks do now?

Does Miller, the unquestioned starter heading into the season, come back for his fifth-year senior campaign and try to compete for the starting job? Does he transfer, either having to sit out a year, find a graduate program not offered at Ohio State or step down a level to start right away? Or does he roll the dice and enter the NFL Draft? And if he was to return to Columbus, would he regain his once locked-in starter role?

As for Barrett, does he think his excellent play this season puts him on the inside track to start in 2015? As a redshirt freshman, he won't have the option of turning pro … so does he stay in Columbus and compete for the starting job, or does he consider jumping ship as well given the meteoric rise of Cardale Jones? Would he be able to accept a demotion should he come back and not win the starting job after the season he just put forth?

Then there is Jones himself, the red-shirt sophomore. Obviously, he is currently the toast of the town, but let's not forget he began camp as third on the depth chart. You have to believe that if Miller or Barrett or both come back, nothing will be handed to Jones. So does he, as crazy as it sounds, consider declaring for the NFL Draft after just three career collegiate starts? It may not be the most far-fetched decision in the world. Given the lack of top-level depth at the position in this upcoming class beyond Jameis Winston and Marcus Mariota should the Oregon QB declare as expected, the timing may be too good to pass up for Jones.

Given his size, arm strength and performances on the grandest of college stages, Jones very well could be the third most coveted quarterback in the 2015 NFL Draft, as bewildering as that sounds. Then again, he could come back and win the job, or get it by default depending on what happens with Miller and Barrett. And just as with Miller, he has the option of transferring if he felt so inclined, surely becoming a coveted commodity immediately should he choose that route. It's a fascinating list of scenarios.

At the center of it all, of course, is Urban Meyer. The man has proved once again that he is a football genius, reclaiming his throne atop the college football world. And just as he did with Alex Smith, Chris Leak and Tim Tebow, Meyer is showing he is a quarterback wizard. Whether it's Miller, Barrett or Jones, Meyer can't really lose. He has three of the most talented, athletic quarterbacks in the land to choose from, and he can't go wrong with any pick, certainly not with the way he coaches up the position.

My guess is that Barrett is the starter in 2015, assuming he recovers fully from the ankle injury. Or at least he gets the inside track. As for Jones and Miller, anything is possible. The best option for Braxton seems to be either to transfer or head to the draft, but as an uneven passer coming off a major injury, his NFL stock certainly is not at an all-time high. For Jones, he could come back and no one would blame him, but if he was to sit behind Barrett (or Miller?), you'd have to think his NFL status would only take a hit, and given the QB situation in the NFL and the upcoming draft, well, now may be as good a time as any for 12-Gauge to ditch class and get that paycheck.

One thing is for sure, no matter how the quarterback position plays out moving forward: The Ohio State Buckeyes are in great hands both under center and under the watchful eye of Urban Meyer. Oh, and they also happen to be national champs. The days as an SEC whipping boy look to be no more, and Meyer may be creating his own quarterback factory in Columbus.

One Reply to “Too Many Cooks? The Uncertain Future Of The Ohio State Buckeyes Quarterbacks”