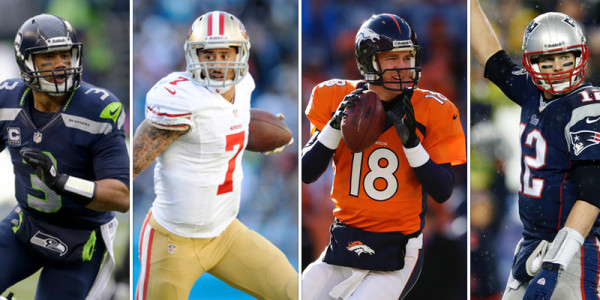 By the time America goes to sleep Sunday night to prepare for another arduous winter work week, everyone will know who will be headed to North Jersey to partake in the Super Bowl. No matter which teams emerge, the Super Bowl match-up will pit two very opposite teams against one another.

In the Denver Broncos and New England Patriots, you have two teams with Hall of Fame-bound quarterbacks still playing at a ridiculously high rate in the twilight of their careers. You also have two offenses that were at the top of league in points and yards, and two head coaches who have led teams to the Super Bowl.

Conversely, both teams are near the middle of the pack defensively, both much more known for their offensive prowess than their work on the other side of the ball.

As for the NFC match-up, it's almost the inverse of that. Both the San Francisco 49ers and Seattle Seawhawks have young, mobile quarterbacks still developing at the highest level. Both teams also have bruising, veteran tailbacks, and receiving corps that are deep if not exactly flashy. And both Jim Harbaugh and Pete Carroll come from the conference formerly known as the Pac-10, where the two coaches showed a dislike for one another in their clashes as the head coaches of Stanford and USC, respectively.

Of course, unlike the Broncos and Patriots, both of whom are known for their prolific offenses, the Seahawks and Niners are known for their defenses — and for good reason. For all intents and purposes, these are the two best defenses in all of football, with Seattle sitting atop the ranks as far as points and yards are concerned, with the Niners right them behind them. Both teams are physical, fast and tenacious defensively, with Seattle's Pro Bowl-filled secondary and San Francisco's Pro Bowl-filled linebacking corps earning their highly regarded reputations.

It's almost alarming at how much the combatants this championship weekend mirror their opponents. And that should only make for more memorable and intense games. Here's hoping both can live up to the hype.

Leaving It On The Field In Coatesville - The Classical

How Serge Ibaka Made the Leap - Grantland

The Lineup: Top 10 Left-Handed Pitchers of All-Time - I-70 Baseball

The Extra Pass: Vince Carter had a front row seat for the “Miracle on Hudson” plane crash - ProBasketballTalk

The Fundamentals: Why Dirk Nowitzki still means everything for evolving Mavs - The Point Forward

Shout-out to Dan Devine at Ball Don't Lie for alerted us to some of these.

One Reply to “Starting Lineups: Mirrored Images In The NFL On Conference Championship Sunday”