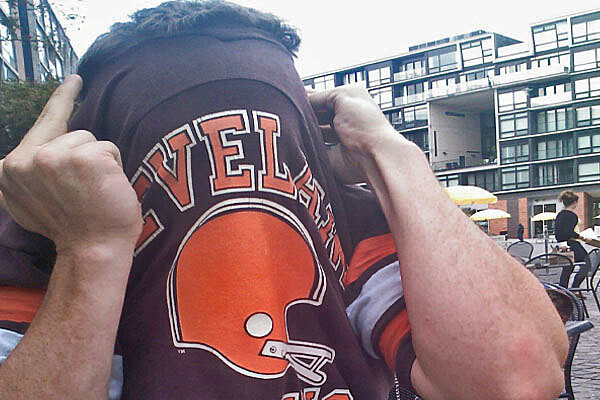 We bring you Mark Trible and Dillon Friday's NFL Countdown project. A fan from each NFL team will be featured as we anxiously await the season's kickoff.

You might think that being a fan of a franchise other than the hometown team — especially when that hometown team is exponentially more successful than yours — is a difficult life. There are few people who share your ups and downs, while the community around you bleeds black and gold or green and white.

But that's not the way Cleveland Browns fan Mike Bloom looks at it. Despite growing up in the heart of Pittsburgh Steelers country — his mother, sister and even his fiancée are all Steelers fans — he wasn't a complete outcast in Steel City territory. Though that doesn't mean it was entirely easy either.

"In my town, there was a mixture of Browns, Steelers and Bills fans, so it was easy to find solace outside of home,” Bloom says. “But when you grow up in a household with two women who were die-hard Steelers fans, plus the entire extended family, it was tough.”

"My grandfather to this day still has the dollar we bet on a (Pittsburgh-Cleveland) game framed in his house," Bloom relays. "I was 8 when I made the bet and made the money shoveling snow off my neighbor's steps. And he took it and still displays it 23 years later.

Of course, the history of the Cleveland Browns didn’t make things any easier on Bloom. Whereas Steelers fans reveled in the Steel Curtain and their dynastic, Lombardi-wielding ways, Cleveland was a different story entirely. The Browns were more well-known for their mishaps than their triumphs — Ernest Byner and "The Fumble," John Elway and "The Drive," "Red Right 88." That makes Bloom's Cleveland fandom all the more puzzling. Well, until you hear how, exactly, he fell in love with these seemingly unlovable losers.

When he was 6 years old, Bloom snuck into the “Dawg Pound” with his father and experienced what being a Browns fan was all about first-hand.

"As a young kid, my favorite player growing up, until Steve Everitt showed up – with his 325 pounds of blond hair, venison, and rock and roll. . . . Be still my heart – was Thurman Thomas, so I split my time between pulling for the Bills and the Browns. However, after being in the ‘Dawg Pound’ and immersing myself in the chaos, I think that really was the impetus of how it all started for me," Bloom says. "By unconsciously becoming the family shit-starter, I think I got everyone more into watching football just to antagonize me. You’re welcome, family." 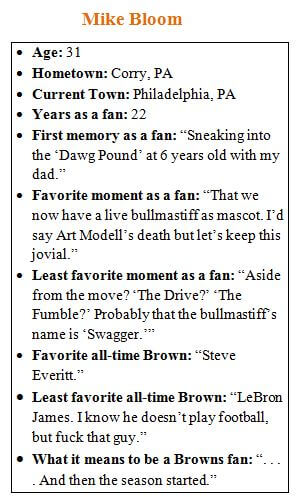 Despite die-hard fans and long history, Art Modell took the artists formerly known as the Browns and relocated them to Baltimore. What was a young Mike Bloom to do? Support the hideous purple-and-black Ravens? Not so much.

Bloom minces no words when asked if he followed the Ravens when Modell moved his Browns out of town. He says he did, “with a machete.”

"Actually, those years were the only time my family and I actually came together during the football season with a shared interest, because Steelers fans were pissed when the Browns got moved."

Bloom threw his support behind the Buffalo Bills during Browns-less seasons.

"I clearly have misplaced affection for losing cities, but there was no way I would become a Steelers fan," he says of those wayward years.

Now all grown up from his days as a three-sport star in high school, Bloom works as a sales rep. Again, he finds himself in the heart of a passionate Pennsylvania fan base. He calls the ‘City of Brotherly Love’ home, where Eagles rule the roost.

It's all par for the course to Bloom, who’s more than accustomed to being an outsider when it comes to NFL rooting interests.

"It's actually pretty great, strangely enough," he says about being a Browns fan in Philadelphia. "You get the opportunity to bring people some perspective when they bitch about their team. Living in Philly, you hear a lot of complaints about the Eagles. Yet since ’99 when the Browns came back, the Eagles have won 140 regular-season games, made 11 playoff appearances, and five Championship games and went to a Super Bowl. Cleveland’s won 77 games, one playoff appearance, and one winning season

"It’s like being a customer service rep in Somalia for Apple or some other large American corporation that people call in to complain about something. They can call and be like, 'My iPhone isn’t working.' 'Yeah? I haven’t had a clean glass of water in 15 years. My son was eaten by a mountain lion and the other got caught trying to kidnap Tom Hanks. You got problems, eh?'”

He still watches his Browns each Sunday, even if the games entail "hope, sadness, frustration, further analysis and then begrudging acceptance." Thanks to NFL Sunday Ticket, he's been able to catch nearly every Cleveland game. At least, until now.

Engaged and in his first-owned home, Bloom no longer has DirecTV. While he hasn't "quite accepted it yet," his "fiancée says it's 'for the better.'" She’s a Steelers fan, after all.

As for the 2014 incarnation of the Cleveland Browns, Bloom understandably has his reservations. He wasn't exactly excited with the Johnny Manziel pick, not necessarily because of anything Manziel has or has not done, but mainly because he feels the pick "was made to get fans excited, and when you’re doing things to appease fans, you're in trouble."

Having said that, he feels all the attention and headlines surrounding Johnny Football are nothing more than nonsense.

"He’s 21 years old with cameras following him around all the time," he says. "It’s not like he knocked his wife out in AC or raped a girl in a bathroom, so he’s already kind of a class act in the AFC North if you really think about it.

"That said, the team now has great players but is just missing a QB. It’s hard to believe one player can change the fortunes of a franchise, particularly a QB that just got drafted, but unless Hoyer is the next Drew Brees, what choice do we have? This kid has enough of a chance to become a mobile Joe Namath as he does a mobile Ryan Leaf."

When it comes to the man thought to be the prime target for Hoyer and Manziel, however, Bloom cuts to the chase. He believes the Browns should cut oft-troubled Josh Gordon due to his repeated off-the-field problems. Though, he hopes he’s wrong and Gordon can turn it around, given that the Browns wideout led the league in receiving despite missing two games in 2013 – while catching passes form the likes of Jason Campbell and Brandon Weeden.

The current — and historic — state of the Browns notwithstanding, Bloom longs for the day the Browns become champs. Even though he says he, "probably (has) a better shot at being the first female president – of Russia.”

"That said, it feels good to be a Browns fan. I love the chip-on-shoulder mentality, and that’s just inherent in Cleveland sports fans," Bloom admits. "There of course is extreme frustration that goes along with it, but to ride this consistent typhoon of sadness on a surfboard whittled from the balsa tree of hope and come out hopelessly in love with this team after all of that comes with aligning yourself with it? It takes balls of brass to admit it proudly."

For more on what it's like to be a Cleveland fan and/or Clevelander, Blooms also suggests everybody (sports fan or not) read Wright Thompson's article, "Believeland."