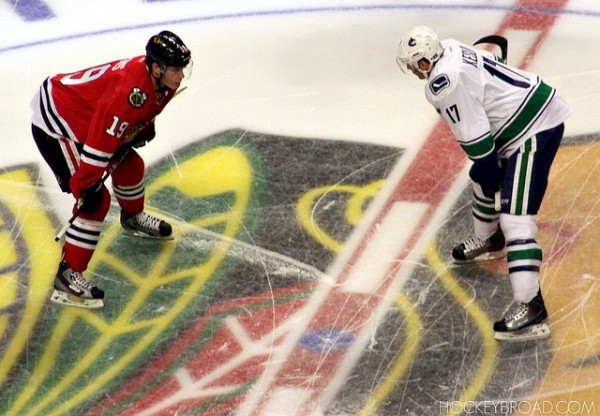 More than anything else, hockey is a possession game. Unless a goaltender stands on his head and steals a victory or a team suffers some unfortunate bounces, the team that possesses the puck the most, more often than not, comes away victorious.

The more you have the puck, the more the opposition is chasing you, wearing them down, while simultaneously creating scoring chances for yourself. You can’t put the puck in the back of the net without having it first.

That’s what makes face-offs so incredibly crucial in the NHL. Often overlooked by novices, a face-off can be the difference between a win and a loss, a goal or another routine shift. The more face-offs a team can win, the more it creates its own opportunities while limiting the scoring chances of its foe. Defensive zone draws while trying to maintain a lead are vital. Offensive zone draws can create a great scoring chance or derail momentum. And there’s nothing more crucial on special teams than winning a face-off — either to set up your power play or clear the zone to relieve your penalty killers.

Anyone who knows anything about me knows how much I care about face-offs. I think every true Stanley Cup contender must have at least one dominant face-off guy to hoist the Cup, and, the more, the better. Of course, being a good face-off team doesn’t guarantee success. The Minnesota Wild and Colorado Avalanche are in the top five in the NHL in face-off percentage, but neither would make the playoffs if the season ended today, while the Devils and Flyers are among the worst face-off teams in the league, yet they currently reside safely in the middle of the playoff pack.

Still, when you see the Boston Bruins, San Jose Sharks and Vancouver Canucks positioned as the top three face-off teams, it’s no wonder they are some of the elite teams in hockey. The Bruins are currently second in the East behind the Rangers (15th in face-offs), the Canucks lead the entire NHL in points and the Sharks, while stumbling of late and holding on for dear life in the seventh spot in the West, have been one of the most successful franchises this past decade.

Given how important each and every face-off is, especially come playoff time, here are ten guys you want in the face-off circle when it matters most.

Joe Pavelski has been a darn good player for the Sharks for a few years now, and America became more acquainted with him during the Olympics, as he was helping Team USA challenge Canada. What those who don’t watch regularly may not know is that as good of an all-around player as Pavelski is, his biggest strength is winning face-offs — as in, he currently leads the NHL with a an astounding 60.2 percent face-off percentage. If you had to choose one player in the NHL to win you a draw if your life depended on it, Pavelski is the guy you would choose.

Toews is the superstar who does it all: score, pass, defend … and win face-offs. He’s second in the NHL behind Pavelski at 59.4 percent, and he’s proof that superstar players aren’t above doing the dirty work. Frankly, there may not be another center you’d want on the ice period in crunch time, given his supreme talent in all facets of the game. The Chicago captain sets a great example for his team, including in the face-off circle.

Halpern fits the mold of one of those unheraled players that every championship-caliber team needs to win. He’s not going to score you a lot of goals or rack up the points. He’s not going to play 28 minutes or draw attention away from the Ovechkins and Semins on his team. But what he is going to do is play smart hockey and get some crucial shifts when the Caps need to win a draw. You may not equate him as a closer, but he’s the man the Caps rely on to take the most important draws, particularly in the defensive zone.

Want to know why the Canucks are third in the NHL in face-offs and nearly impossible to defeat once they get a late lead? Look no further than Manny Malhotra. While Henrick Sedin has won the most face-offs on the team by the sheer fact that he gets the most ice time at center, it’s Malhotra that’s out there when the Canucks are protecting a lead. It’s easy to see why, with his 58.2 percent success rate, helping the already stout Canucks become even stingier in front of Roberto Luongo.

Dave Steckel has never scored more than eight goals in a season, never put up more than 19 points and is a career minus-eight skater. With numbers like that, you may be wondering how in the hell the guy has been regular on playoff teams throughout his career. The reason is simple: Steckel is as dominant a player as there is in the face-off circle. He’s the ultimate specialty player, a guy who may not give you much in the way of offense, but a guy whom you can absolutely count on in the circle. He’s the type of fourth-liner that is invaluable on a deep, contending team. Sadly, he’s currently in Toronto on the outside looking in on the playoff picture.

Bergeron is what you would call a poor man’s Jonathan Toews. Very good player in his own right, the type of guy who can do a little bit of everything — albeit not to Toews’ extent — and a guy who simply goes out there and wins face-offs. He’s second in the league in face-offs won and his 57.6 percent success rate is remarkable. With him on the roster taking the most face-offs, it’s no wonder the Bruins are the best of the best at the dot.

No one in the entire NHL has taken or won more face-offs than Jason Spezza, and while his 54.1 percent puts him out of the top 20 in percentage, it’s nothing to sneeze at. He’s so trusted that damn near every third-period draw is decided by his stick for Ottawa, and the Senators can take comfort more often than not. No team relies more on one center to take draws than Ottawa does with Spezza, providing another layer to one of the greatest Senators of all time. 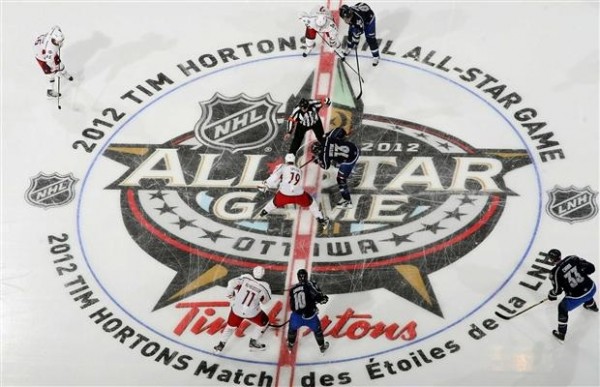 When the Predators traded a first-round pick for Paul Gaustad, it raised more than a few eyebrows, for a number of reasons. For starters, Gaustad himself was a seventh-rounder, the type of guy projected to be a mucker and grinder as opposed to a potential star that gets taken in the first round. The second is that, while not devoid of offensive talent, for the most part Gaustad has been exactly that: A defensive-minded guy who will do all the dirty work. But Nashville feels it has what it takes to make a run at the Cup, so they parted with a first-rounder to get one of the elite face-off men in the game. Gaustad sort of took the reins from Michael Peca up in Buffalo in that regard, a guy who can be counted on to win any big draw. Now he brings that specialty, along with some scoring ability and sound defense, to Nashville, and the Predators paid a steep price thinking what he brings to the table just may put them over the hump.

Insanely ridiculous offensive talent? Check. Best defensive forward in hockey? Check. Pavel Datsyuk always gets his due in both regards, whether it be the highlight-reel goals he scores and/or sets up, or the three Selke Trophies he’s won as the top defensive forward in the NHL. What many people may not realize, however, is that Datsyuk is also among the best face-off men in the league. Henrik Zetterberg may have the bigger contract, but Datsyuk is the most well-rounded Red Wing, and the guy Detroit looks to for the big draws.

While everyone acknowledges Thornton’s talent and status, the man gets an awful lot of flack for the Sharks’ failings in the postseason. Well, it’s time to give Thornton his due for all his attention to detail. Maybe he hasn’t been the best playoff performer, but it’s not for a lack of effort. Thornton is a lot like Datsyuk and Toews in that regard, a player who truly does it all and is a superstar at the same time. That extends to the face-off circle, where Thornton is always well above 50 percent and typically second only to his teammate Joe Pavelski each time he takes the ice. Maybe he doesn’t have his name engraved on the Cup as of yet the way Toews and Datsyuk do, but he’s the type of player who strives to perfect every aspect of the game, including face-offs.

2 Replies to “Manning the Circle: The NHL’s 10 Best Face-Off Men”

Hockey The Five Hockey Trades That Should Happen
2