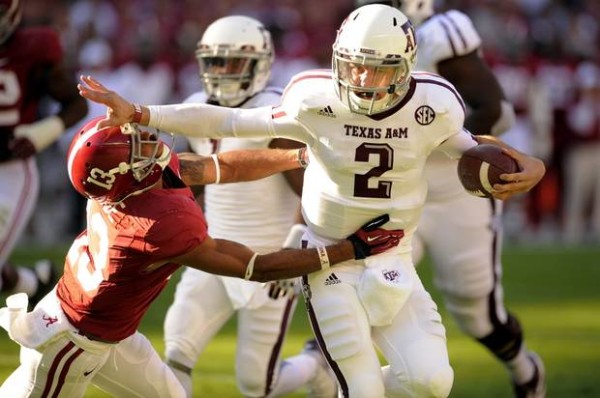 Last season, redshirt freshman Texas A&M quarterback Johnny Manziel could do no wrong. He upended the mighty Crimson Tide, debunked Heisman myths and became one of the coolest cats of 2012. All the while, he seemed to be thoroughly enjoying himself as a 19- to 20-year-old college student both on and off the field, which was somewhat refreshing in this day and age.

Everybody wanted a piece of Johnny Manziel, the kid who amazed on the football field and entertained both on and off it.

But since he hoisted that Heisman Trophy in New York City, the narrative has changed. Manziel has gone from thrilling the nation on the gridiron and being jovial off of it to an "out-of-control, immature punk who's getting in way over his head." At least, that's what the sports-screaming media and internet public have declared.

It first began with his controversial appearances sitting courtside at NBA games. It increased with the news of fake IDs, criticisms of his school, frat parties, Twitter pictures and beefs, and just continues to increase with every move he makes. People can't seem to understand how a guy who has so much right now can — gasp! — act like a 20-year-old college sophomore/junior. Who does Johnny Manziel think he is, some kind of normal 20-something? The nerve of that guy.

To which I say, enough. Yes, Johnny Manziel is the face of Texas A&M football and perhaps the face of NCAA football right now. Yes, he has a responsibility to his school and his team to go out and perform and maximize his abilities in the classroom and on the field. Yes, he is drawing a lot of attention to himself, something that is greatly exacerbated by the 24/7, know-all, tell-all internet world. But at the end of the day, all Johnny Manziel is doing is what quite literally millions of college students are doing on any given day.

Full disclosure: I am 29 years old, meaning that Facebook was literally just coming out while I was in college at Penn State, and Twitter did not even exist yet. Thus, the level of scrutiny and the number of outlets people had on the internet weren't quite as large or as fast as they are today. But I wasn't in college 100 years ago either. The internet was alive and well, and word spread when things happened.

So think back to your college days, or reflect on the times you are experiencing now as a college student. How many of you out there haven't tried to get in a bar or buy some alcohol with a fake ID? I'd venture to say very few of you, though there certainly are more than a few out there. Actually, I never even had a fake ID myself … but I did get busted for underage possession of alcohol because a vast majority of college students — college freshman — drink underage.

Think about how many times you were frustrated with a policy or a class or a professor at your institution. Who here hasn't criticized their alma maters at one point or another? Think about all the fraternity or sorority parties you attended. How common was it to see someone get thrown out, for whatever reason? I know I've been tossed out of more than a couple in my day. And shit, think about all the Twitter beefs and showboating that get lost in the ether every single day on the internet.

Johnny Manziel isn't doing anything outrageous. He's not repeatedly having run-ins with the law. He's not failing his courses, as far as we know, or committing any clear-cut NCAA violations beyond the fake ID issue which he pleaded guilty to. He's not harming anyone, unless you want to get on your moral high horse and say he's harming himself by bringing all this attention to himself. Feel free, but then don't forget all the stupid shit you and your loved ones have done throughout your time on this planet.

All Johnny Manziel is doing is living his life, the life of a college student, and enjoying it, just like he said he would. Until, or should I say unless, he actually does something that harms himself or his team directly, it's time we all shut the hell up about what Johnny Manziel should or should not be doing. Because at the end of the day, all he has to do is live his life the way he sees fit in the confines of his responsibility to his university and his team. That's it.

At the end of the day, Johnny Manziel is a 20-year-old college kid who is doing what college kids do. He's living, learning, growing, and sure, he's making mistakes along the way. We all do. We all have. It just so happens that most of us don't get crucified for it because we aren't lucky or talented enough to be holding a bronze statue posing with a football. So please, just leave Johnny Manziel alone already … at least until the Aggies take the field.