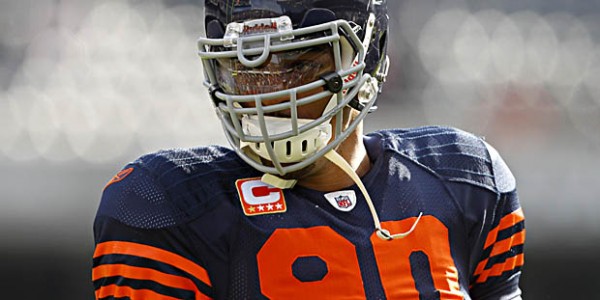 Thirty-two years ago today (Jan. 18, 1980), the most athletically gifted defensive end I've ever seen was born: Julius Peppers. Growing up as a rabid college basketball fan and following the North Carolina Tar Heels since my youth, I remember this beast of a man suiting up for both football and basketball and intimidating everyone in both.

On the gridiron, Peppers was, without a shadow of a doubt, the best player on his team from the get-go, doing things we rarely have seen from the defensive end position. In his freshman year, he led the Tar Heels in tackles for loss and sacks while starting all 11 games, earning Freshman All-American honors. On the hardwood, he joined Bill Guthridge's squad that went all the way to the Final Four after football season, averaging 4.5 points and 3.5 rebounds while shooting 57 percent from the field and more importantly jacking up his team with thunderous dunks. 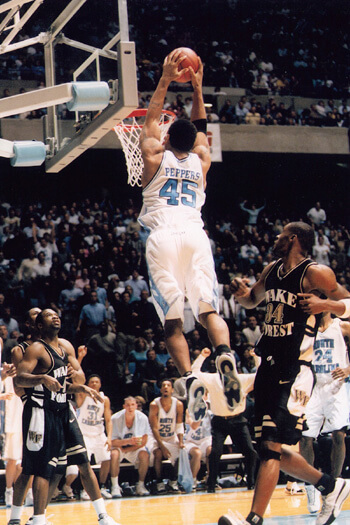 He became an instant phenomenon: the star of the football team throwing down rim-rattling dunks for the one of the most storied basketball programs in the nation. Instantly, Peppers became a favorite of mine and thousands of others. Julius Peppers had us from the jump.

However, his thrilling slams on the court were short-lived. Peppers only played one more season of basketball -- with a few monster games -- realizing that his future lied on the gridiron. It'd be damn near impossible to say Peppers made anything but the right decision. As a sophomore, he led the nation in sacks with 15, which was just one shy of the great Lawrence Taylor for the school record. He also set the UNC record for tackles for loss with 24, and followed that up with a junior season for the ages: three interceptions, 63 tackles, 19 tackles for loss, 9.5 sacks and a laundry list of awards. Peppers was named the Rotary Lombardi Award winner (nation's top lineman), Bednarik winner (best defensive player), and a unanimous First Team All-American, the first player in UNC history to achieve that feat.

All Peppers has done since is have an All-Pro, Hall-of-Fame NFL career -- one that includes a Defensive Rookie of the Year, six Pro Bowls, three First-Team All-Pro honors, 100 sacks, eight interceptions and two touchdowns. And Peppers is still going strong, finishing with 11 sacks in 2011 and starting all 16 games.

From his days at UNC where he was wreaking havoc on ACC QBs and dunking on Dukies, to his dominance helping to lead the Carolina Panthers to the Super Bowl, to his continued production in the Windy City, Julius Peppers has been someone you have to watch and marvel at. Today is his birthday, so show him some love.