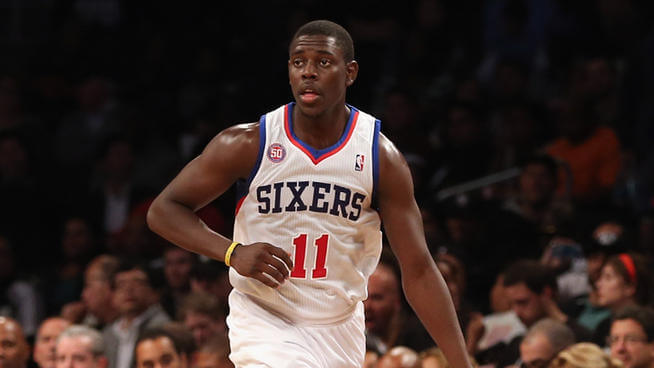 Last Thursday night, as the 2013 NBA Draft was about to kick off, I was on my way to a bar in the Roxborough section of Philadelphia, which I like to call the suburbs, for a date. As such, I was not actually watching the NBA Draft and didn't think much of it with the Philadelphia 76ers holding the 11th overall pick.

In an underwhelming draft class, I really wasn't all that invested in who selected whom, if I'm being quite honest. But shortly after I ordered my first drink while waiting for my date to arrive, my phone began to go bonkers, with texts and Twitter alerts all over the damn place. I had no idea what anyone was talking about, asking me if they could be Pelicans fans now, wondering if this was good or bad, etc.

As I sat there waiting, I began to get the news secondhand and in bit pieces. At first, all I knew is the Sixers traded their best player, a 23-year-old point guard fresh off his first All-Star campaign, for Nerlens Noel, the Kentucky big man most people thought would go No. 1 overall before his knee injury cut his freshman year short. And I was livid. Jrue for Noel, straight-up? The fuck?

Then a friend of mine erroneously reported to me that not only did the Sixers give up Jrue for Noel, but they actually traded away a first-round pick in the process. That had me firing off tweets about Sam Hinkie and his great start, all in sarcastic and, frankly, pissed-off tones.

Finally, however, the dust settled and what initially had me raving mad turned me into a full-on supporter. No, contrary to my piecemeal information, the Sixers did not trade Jrue straight-up for Noel, nor did they trade Jrue and a pick for Noel. No, the Sixers traded Jrue Holiday for the rights to Nerlens Noel, the sixth overall pick, as well as a 2014 first-round pick that is top-five protected. They also kept their original first-rounder, taking Michael Carter-Williams from Syracuse.

After I slept on it, finally getting the full details of the deal, it can only be considered a smart, excellent move by Sam Hinkie and the 76ers. Overnight, they shed Holiday's contract, got super-young with high upside players in Noel and Carter-Williams, and have two first-round picks next year in a loaded draft class. And since the Sixers were already a lottery team and now lost their best player, they are sure to be terrible in 2013-14, increasing their ping pong balls and a chance at Andrew Wiggins, Jabari Parker, et al — though contrary to some reports, they don't get two shots at those players since New Orleans' pick is top-five protected. Still, a coup of sorts that came completely out of nowhere, so far as I could tell.

Unlike Evan Turner, I hadn't heard a peep about Jrue Holiday being traded, and why would you after his all-star performance in 2012-13 at the ripe old age of 22 (Holiday turned 23 in June)? And I think that's exactly why it's still an incredibly difficult trade to take as a Sixers fan, even though it is admittedly the right move.

Andrew Unterberger did an eloquent job breaking this down over at The700Level:

I can’t remember him ever being even rumored to be rumored to be included in any kind of trade scenario. For four seasons, he was the closest thing we had to an untouchable, the kind of player who you make deals to build around. When I first heard on draft night that the Sixers had dealt for Nerlens Noel, I figured it was a trade-up deal that included the #11 pick, maybe a future pick, or at worst an Evan Turner or Thaddeus Young personnel throw-in. It never occurred to me that Holiday could be the primary expense, and when I finally heard that it was, I was as stunned as Bill Simmons.

But with Holiday…we just don’t know yet. He’s only 22, just coming off a breakout season, and while his ceiling is hardly limitless, there’s no telling how much he’ll iron out the little kinks in his game–improving his shot selection, getting stronger on off-ball defense, learning how to draw and finish through contact–to become one of the best all-around point guards in the league, someone who could be a perennial All-Star for years and years to come. As much as it hurts to give up the player that Holiday already was, it hurts twice as much to give up the player he might one day become.

That's perhaps the hardest part. Yes, Holiday is flawed right now as a player. He still makes some bad decisions and takes too many quick shots, and he's nowhere near the defender his physical tools can allow him to be. But he's just 23 years old, clearly talented and easily the most fun thing about the Sixers the past two years. Yet at 23, people are already proclaiming to know the type of player he's capable of becoming, labeling him a good but not great NBA point guard. I'm not saying that assessment is wrong … what I'm saying is we don't know because, again, he's just 23 years old.

Furthermore, Holiday just seemed to really enjoy playing the game and playing in the city of Philadelphia, and the fans loved him for it. Honestly, he was probably the most liked Sixer and the most exciting player the city has seen since Allen Iverson's first tour of duty. Whereas Andre Iguodala's game always seemed to be picked apart, the fans seemed to embrace the youthful exuberance of Holiday.

These factors, along with him being a personal favorite of mine, are what makes it so hard to say goodbye to Jrue Holiday, Sixers point guard. I never saw his departure coming, and it wasn't even something I could have dreamed up.

Ultimately, I truly believe it's the right move for the franchise, completely hitting the reset button, stockpiling young talent and draft picks, going into full tank mode and building for the future. I get more excited of the possibilities every day.

But it's still hard to say goodbye to Jrue Holiday, and I wish him nothing but the best down in New Orleans as one of the many young faces of the newly branded Pelicans.

3 Replies to “Jrue Holiday: It's So Hard To Say Goodbye”